Jerry Wood of Charlevoix County
Berlin Blockade & Airlift
The North Atlantic Treaty Organization [NATO] describes The Berlin Blockade on their webpage as follows: "At the end of the Second World War, Germany was divided between the four Allied powers: France, the United Kingdom, the United States and the Soviet Union. Its capital, Berlin, suffered the same fate with the added complication that West Berlin became an enclave within the Soviet zone.

Joseph Stalin, the Soviet leader, imposed the Berlin Blockade from 24 June 1948 to 12 May 1949, cutting off all land and river transit between West Berlin and West Germany.

The Western Allies responded with a massive airlift to come to West Berlin’s aid.

One of the first major international crises of the Cold War period, the Berlin Blockade exposed the deep ideological differences separating East and West."

Please do not copy the photos on this site, many of which have been submitted by private individuals...
just come back and visit the site often to view the photos.
Evidently, a popular postcard, the front of this particular postcard below,
showing Berlin's massive devastation,
is posted on-line by another family on a military forum... a Mom in Post-War Germany.
Postcard Below: This scanned family postcard was postmarked 15 May 1949,
just three days after the "Lifting of the Berlin Airlift."
Jerome Wood's parents Howard and Marion Mackie Wood
lived on top of Chandler Hill in Charlevoix County MI for a great deal of their lives.
Their daughter Howardine lived in Fenton MI and their daughter Isabel lived in Chicago IL.
Jerome "Jerry" Wood wrote the postcard below to his sister Howardine (Mrs. J.M. Plumb). 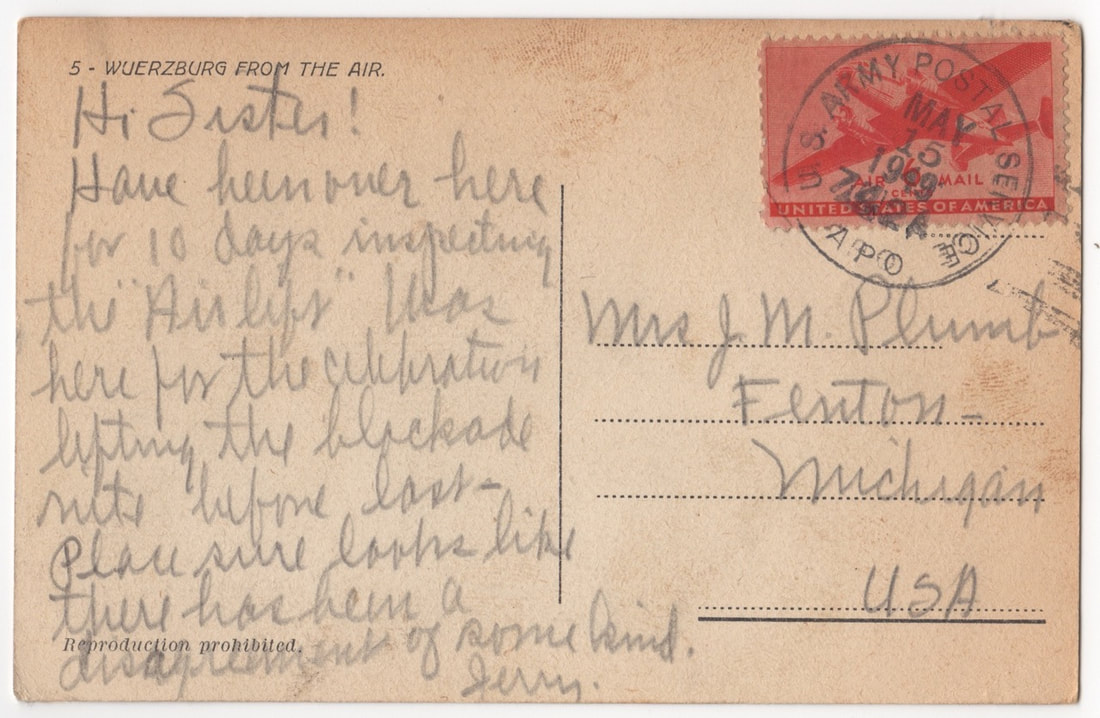 Postcard Above Transcription: "Hi Sister! [Howardine Wood Bush Plumb of Fenton Michigan] Have been over here [Berlin] for 10 days inspecting the 'Airlift.' Was here for the celebration lifting the blockade nite before last-Place sure looks like there has been a 'disagreement' of some kind. Jerry [Jerome Wood]"
A 7 May 1949 letter from another Jerry's sisters Isabel Wood Oldham who lived in Chicago IL at that time written to Howardine's, Isabel's, and Jerome's mother Marion Mackie Wood of Chandler Township Charlevoix County MI stated: "Jerome is on his way to Berlin Germany with a company of War Office men-Col. Beckwith in charge. Some gimmick the Airlift developed in night flying means very good news & Gen. Arnold asked for the War Office to send Jerome over to see if it can be developed in commercial flying."
On 11 May 1949 Marion Mackie Wood wrote in her daily diary: "Tomorrow in the morning the Blockade is going to be done in Berlin-Russia is going to open the way to the American, English & French Sector at 5 A.M. Jerome will be there, such a thought!" [Marion's son Jerome Wood had started his aviation career as a barnstormer with his first license having been signed by Orville Wright. By 1949 Jerome was a civilian pilot for Eastern Air Lines, but conscripted into this military mission.]
On 17 May 1949 Marion Mackie Wood wrote in her daily diary: "My dear lad [son Jerome Wood] should be back from Germany today. I'll be glad when he is home safely... General Clay is coming back to Washington today. Maybe Jerome will come with him."
Later, adding to Marion Mackie Wood's information above, her granddaughter Marianne Arnold wrote about her father Jerome Wood's 1949 trip to Berlin: "In referring to my dad's trip to Germany, Grandma makes it sound like the government picked Dad out and he was the only one who went for them. The opposite is true. The Berlin Airlift was having problems and they were losing more planes and crews than the American people knew-never get away with that now! They were landing a plane every couple minutes, even closer at times. So they put together a fact-finding and advice crew to check it out. They had every kind of engineer you can imagine, airport designers and builders, weather people, etc. The one thing they didn't have were any pilots-you know the people who actually fly and land the planes! Dad had successfully testified before Congress regarding airport safety, when the airlines didn't want to spend the money on it. Congress sided with the pilots and the measures were taken. He was also first vice-president of the pilots union at that time. So he contacted one of the people he knew on the committee going to Germany and pointed out the obvious flaw. They agreed and asked him to go and he suggested that there should be more than one, so they had him pick five I think. I know there was him, a pilot from American and one from United and I think a couple of others."
The C-SPAN website states: "The Berlin Air-Lift: The Story of a Great Achievement The Berlin Airlift of 1948-49 involved more than 250,000 flights carrying food and supplies into West Berlin, after the Soviet Union cut off road and rail corridors on June 24, 1948. The Airlift officially ended on September 30, 1949, after the Soviets re-established surface traffic. This 1949 film produced by the British government details the British and American joint operation" View the 11 minutes of film on the C-SPAN webpage.
With the massive Berlin Airlift, many, many personal stories abound as well as that of Jerome Wood. Chuck Childs's story is told on the Malmstrom Air Force Base webpage 2016 article, titled  "Berlin Airlift pilot recalls training at Great Falls."
~ "Air Lift" Petoskey Eye Witness Returns Home  ~
1948 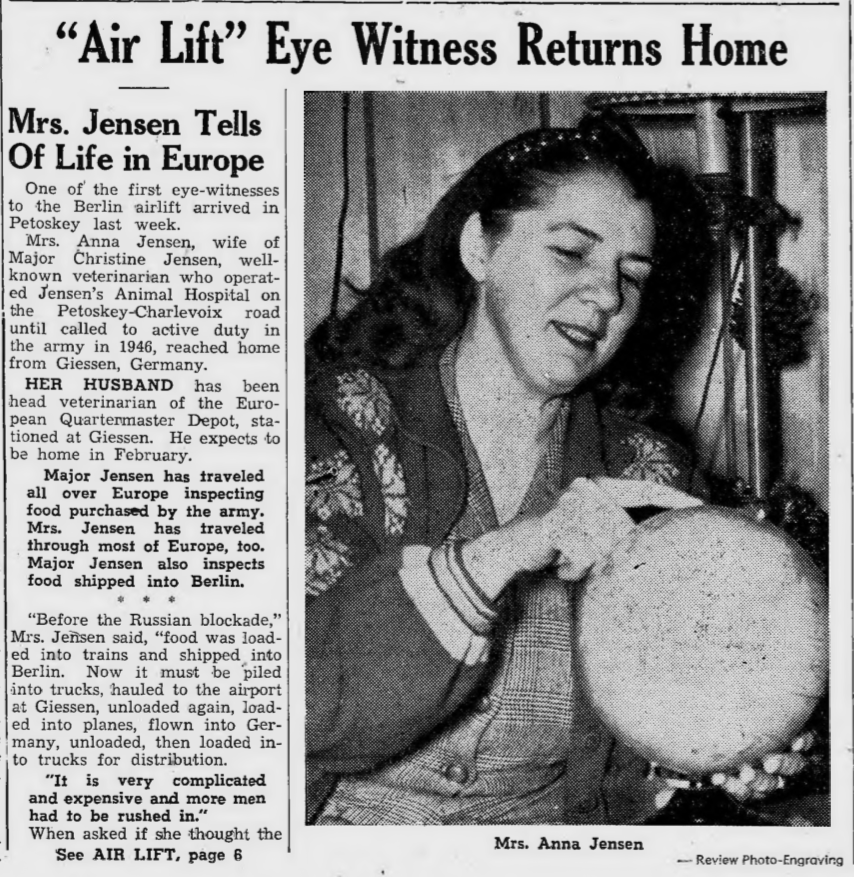