Please do not copy the photos on this site, many of which have been submitted by private individuals...
just come back and visit the site often to view the photos.
~ Petoskey Gains New Memorial To Civil War Veterans ~
24 June 2008 ~ Petoskey News Review Staff Writer Ryan Bentley 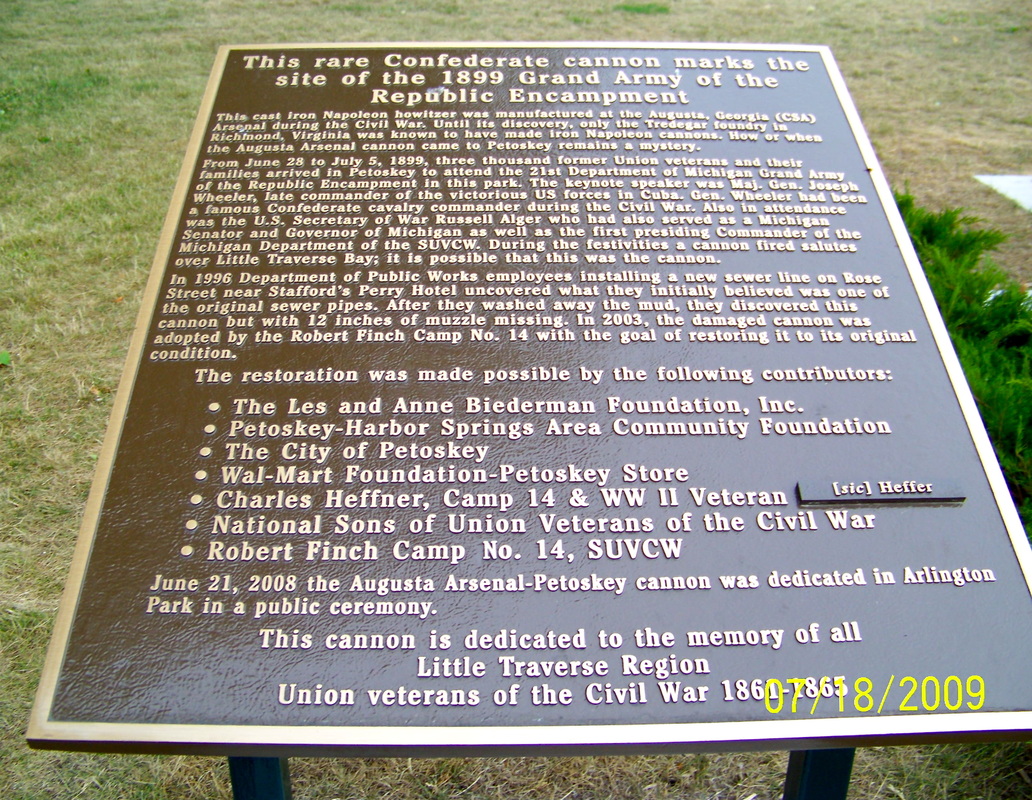 What connection might the cannon barrel have to the 1913 news article below?

"This cast iron Napoleon howitzer was manufactured at the Augusta, Georgia (CSA) Arsenal during the Civil War. Until its discovery, only the Tredegar foundry in Richmond, Virginia was known to have made iron Napoleon cannons. How or when the Augusta Arsenal cannon came to Petoskey remains a mystery.

From June 28 to July 5, 1899, three thousand former Union veterans and their families arrived in Petoskey to attend the 21st Department of Michigan Grand Army of the Republic Encampment in this park. The keynote speaker was Maj. Gen. Joseph Wheeler, late commander of the victorious US forces in Cuba. Gen. Wheeler had been a famous Confederate cavalry commander during the Civil War. Also in attendance was the U.S. Secretary of War Russell Alger who had also served as a Michigan Senator and Governor of Michigan as well as the first presiding Commander of the Michigan Department of the SUVCW [Sons of Union Veterans of the Civil War]. During the festivities a cannon fired salutes over Little Traverse Bay; it is possible that this was the cannon.

In 1996 Department of Public Works employees installing a new sewer line on Rose Street near Stafford's Perry Hotel uncovered what they initially believed was one of the original sewer pipes. After they washed away the mud, they discovered this cannon but with 12 inches of muzzle missing. In 2003, the damaged cannon was adopted by the Robert Finch Camp No. 14 with the goal of restoring it to its original condition."

The restoration was made possible by the following contributors:

June 21, 2008 the Augusta Arsenal-Petoskey cannon was dedicated in Arlington Park in a public ceremony.
This cannon is dedicated to the memory of all
Little Traverse Region
Union veterans of the Civil War 1861-1865
This small plaque is located on the cement directly under the cannon barrel. 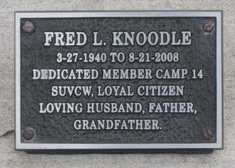 This small plaque is located on the cement directly under the cannon barrel.
Fred L. Knoodle

Fred L. Knoodle has been buried in the Lakeview Cemetery Harbor Springs MI.

963 Interments of the Lakeview Cemetery are listed on the internet. 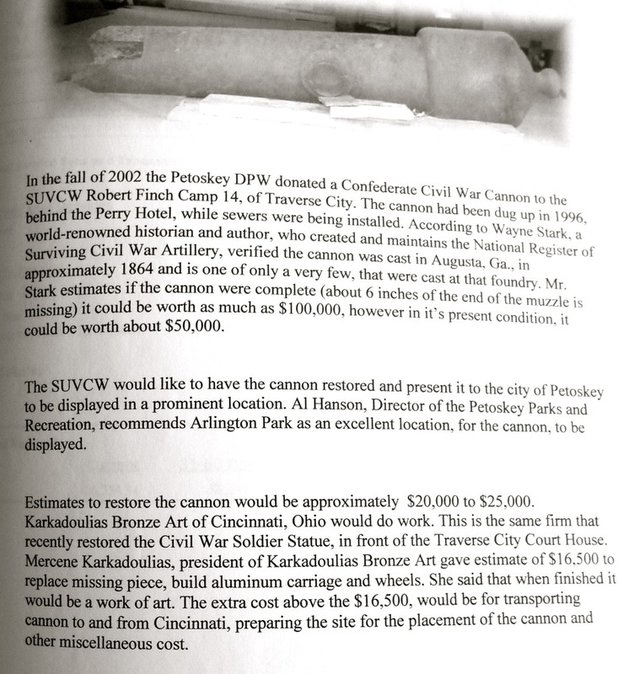 The letter to Al Hansen from Fred Knoodle was regarding the cannon barrel. 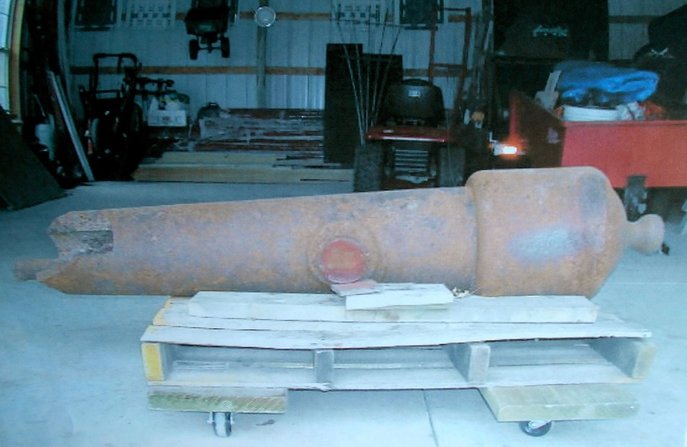 Trunnion on the Cannon's Broken Barrel 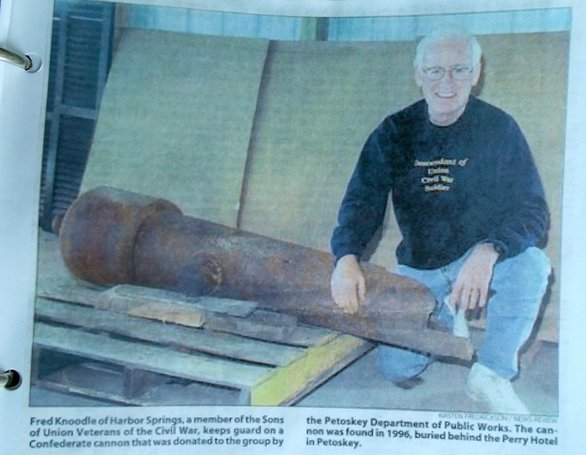 Undated Petoskey News Review Article
The undated article with the above photo stated:
"'I've corresponded to some Civil War experts and they say it's one of a kind,' said Fred Knoodle, a member of the organization who is storing the cannon in his barn in Harbor Springs. 'If you're interested in Civil War history at all, this will make a spark. It's really special.'
Knoodle said several markings on the cannon revealed that it was indeed a Confederate piece of artillery. And as Knoodle began to remove some of the rust on the 1000-pound cannon, he discovered that it was built at the Augusta Arsenal in Augusta, Ga.
'Augusta Arsenal produced artillery for the Army of Tennessee and units in the south and west,' Knoodle said he discoverd in his research. 'This type of cannon was capable of firing a projectile a distance of more than 1,000 yards.'
Another aspect that makes this unique is that it is now one of only 143 cannons in Michigan, most of which are on display at museums or in public parks.
The cannon also wasn't found in its entirely, and how the barrel of the cannon was damaged is unclear. Knoodle, who speculates that several inches are missing, said it could have been damaged in battle, been blown off during a post-war Fourth of July celebration or may have been damaged during some type of prank.
Even if no other details are discovered about the cannon, Knoodle said his organization is looking forward to restoring this piece of history.
'We want to restore it, but it's going to take some time,' he said, adding that the group would like to keep the cannon in Petoskey, where it was found.
'We may never find out what happened to it. There's probably no one still alive from when this was brought up here,' he said. 'It would have been a shame if this would have been scrapped, because it's a piece of history.' Anyone with information about how this Confederate Civil War cannon found its way to Petoskey or how it ended up buried along Rose Street, can contact...." 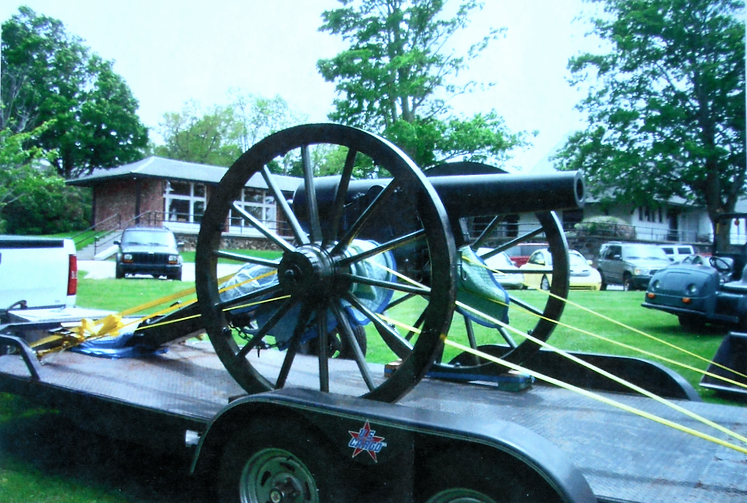 Preparation for Placement of Cannon in Arlington Park for Dedication Ceremony
Al Hansen, Director of Petoskey, Michigan, Parks and Recreation, wrote on 8 November 2016: "Members of the Department of Michigan Sons of Union Veterans of the Civil War, the Robert Finch Camp 14 researched the cannon and found that it was an Iron Napoleon Howitzer field artillery piece that had been cast at  the Government Foundry and Machine Works in Augusta, Georgia and was utilized by The Confederate States of America. Until its discovery the Tredegar Foundry in Richmond Virginia was wildly believed to have been the South's only resource for such cannon. The cannon has been completely restored and has been placed on a replica #2 field artillery gun carriage. The cannon is on display at Arlington Park.
It is not known how the cannon got to Petoskey, however, it is known that the Petoskey Community was honored by being selected to serve as host for the Twenty-first annual Department of the Michigan Grand Army of the Republic Encampment program held at Arlington Park in 1899. In attendance was United States Army Major General Joseph 'Fighting Joe' Wheeler, who had served with distinction as a Confederate General during the Civil War. It is believed that this cannon was brought to Petoskey as part of this gathering of Civil War Veterans."

Article Below: Camp Rose located on the hill near the Arlington... 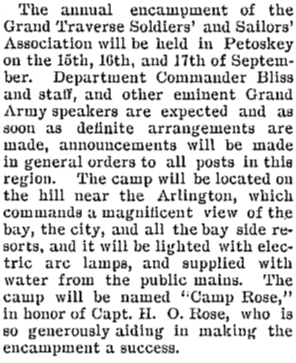 25 June 1899 ~ The Petoskey Record
The extensive article below, which followed under the broadcasting headline above, is presented here in three sections to be read in columns from one section to the next. It describes the exciting event of the Grand Army of the Republic Department Encampment held in Petoskey at the site of the Arlington Park. 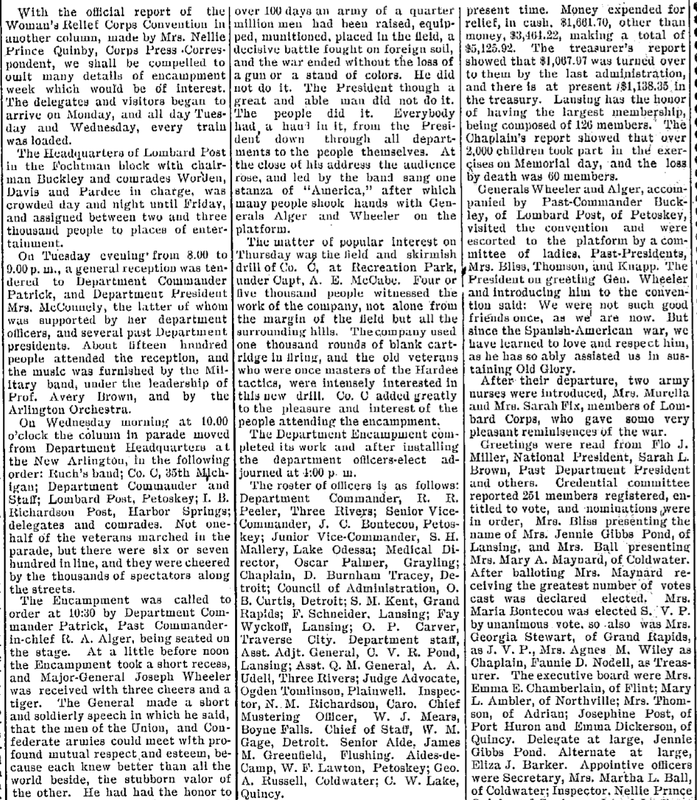 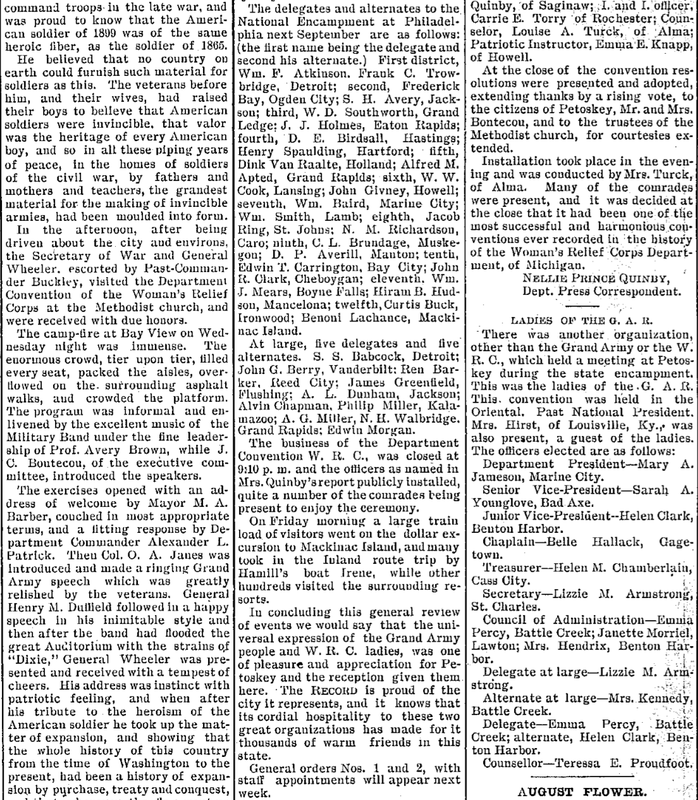 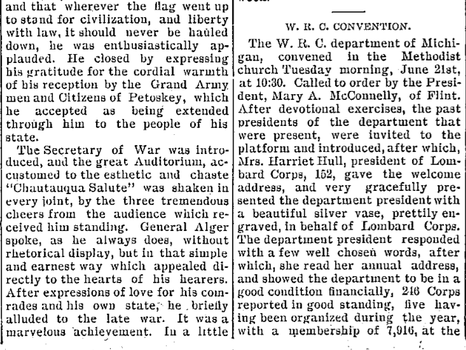 28 June 1899 ~ The Petoskey Record
The 1899 article below included follow-up accolades regarding the above Grand Army of the Republic event held in Arlington Park where the Historical Marker and Napolean Howitzer Confederate Cannon exists since 2009.

28 June 1899 ~ The Petoskey Record
Most good happening or events like the
Grand Army of the Republic Department Encampment held in Petoskey
do have "side stories" like the Bay View pickpockets noted in the article below left , even robbing Col. Lusk, Or
The accolades for the Welcome Arch built on Howard Street by Mr. C.C. Hamill.

Photo Below: Skip Bryant, Commander of Robert Finch Camp No. 14,
Traverse City Department of Michigan, Sons of Union Veterans of the Civil War was a guest and speaker, at the Emmet County Genealogy Society at the 4 November 2014 Potluck. 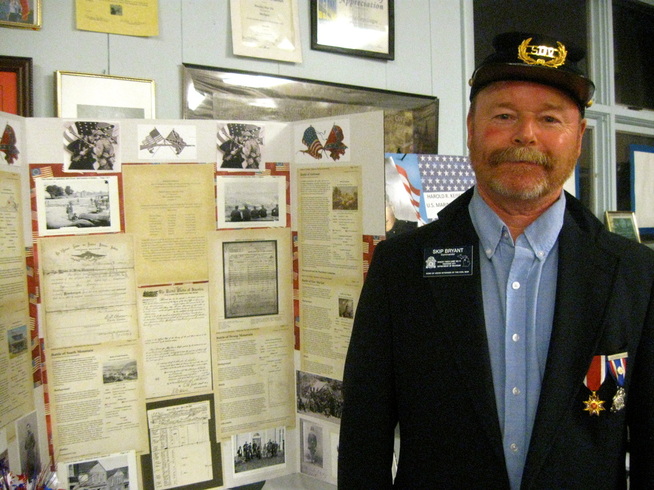 The Traverse City Record Eagle had a series of articles about the
Civil War in relation to Northern Michigan.
Arlington Park
Cannons
Memorials
MEMORIALS and MARKERS
Pennsylvania Park