Please do not copy the photos on this site, many of which have been submitted by private individuals...
just come back and visit the site often to view the photos.
Bruce Catton ~ Life and Career
Bruce Catton was a noted American Patriot who captured history as a journalist and author. His books about the American Civil War are noteworthy, including his 1954 Pulitzer Prizewinner A Stillness at Appomattox. Thus it is fitting that a monument to this great author who was born in Petoskey MI 9 October 1899 has this lasting memorial, resting in the front of the Carnegie Library in Petoskey MI. Although Bruce Catton spent most of his life in Benzonia MI, he passed away 28 August 1978 in his summer home in Frankfort MI. 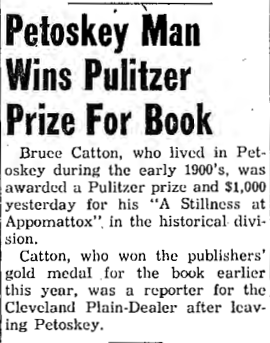 4 May 1954 ~ Petoskey Evening Newsx
The 27 September 1965 Petoskey News Review reported within a "Bruce Catton Committee Thanks Many Who Helped" article:
"Earl Young of Charlevoix, who know more about boulders, we think, than any man alive. Earl worked many hours, besides making several trips to Petoskey. This granite glacial boulder came from Earl's property at North Point, Charlevoix. Earl did not charge us anything for the boulder.
Steve Jackamowicz, for taking time out of his regular schedule to work on the stone.
Bare Construction Company, for their work on the stone, aside from their own heavy schedule...
Stub Swanson of Swanson Contractors of Charlevoix who moved the stone to Petoskey. He and several of his men came over to Petoskey and worked until 10:30 PM to set this stone that carries the plaque...
The above plaque photos were taken by Karla Howard Buckmaster. 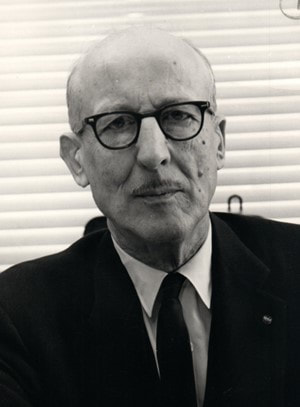 17 September 1966 ~ Petoskey News Review
Photo Below: Stan Kellogg is also known for his huge ice sculptures which
he created at the Petoskey Winter Sports Park.
The sculptures included a throne for the Winter Sports Queens as seen in the photos below. 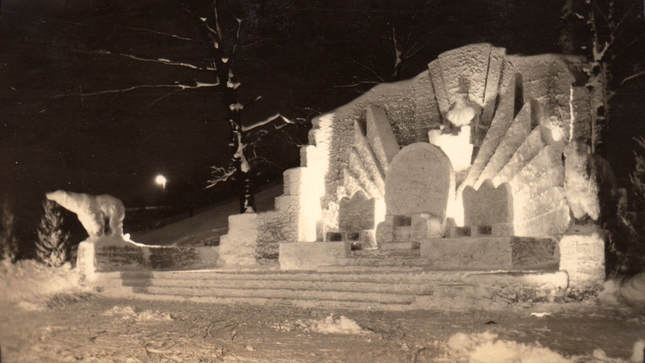 1928? Winter Sports Ice Throne Sculpture ~ Submitted by Geoff Guillaume from the collection of his grandfather Harold Guillaume
Ice Throne Sculpture Description ~ From an Undated Newspaper Clipping
(Ice Thrones Shown in Photos Above and Below)
"Stanley Price Kellogg, a young man of twenty-three years, was a native son, who showed unusual talent in art, especially sculpturing. He was asked to design the throne of ice.
This was a challenge for even a professional artist, for ice was one of the most difficult of all materials to create a likeness from. Not so for Stanley Kellogg. Working night and day he made a small model of an ice throne that would surpass anything like it before.
The dimensions alone were astronomical. It would be 125-feet long. 80-feet high-with varied level terraces leading to the Queen's throne 80 feet back and up from her audience. It would call for 700 tons of natural lake ice sawed in two-foot blocks from Little Traverse Bay, but most difficult, it would feature a huge statue of the Queen of Winter-double life size-overlooking the skating rink at Winter Sport Park.
Kellogg met the challenge, even freezing his hands as he chipped the figure from clear blue ice,-and when the throne was flooded with colored lights on Coronation night, it spotlighted his unusual talent to the Art World.
His creation of the throne was short lived, within a month the masterpiece became water from the melting sun, but it gave this self taught Petoskey artist nation-wide publicity.
Lorado Taft, the famous sculptor form Chicago invited Kellogg to study under him and Stanley became as assistant in his studio." 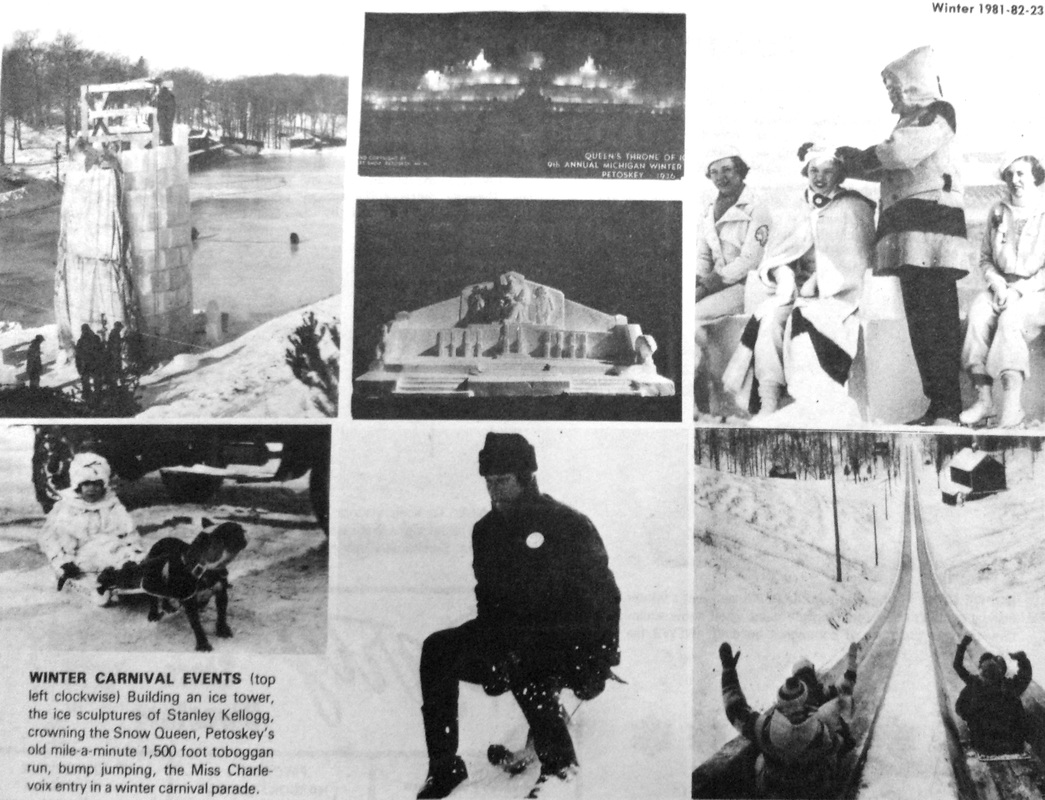 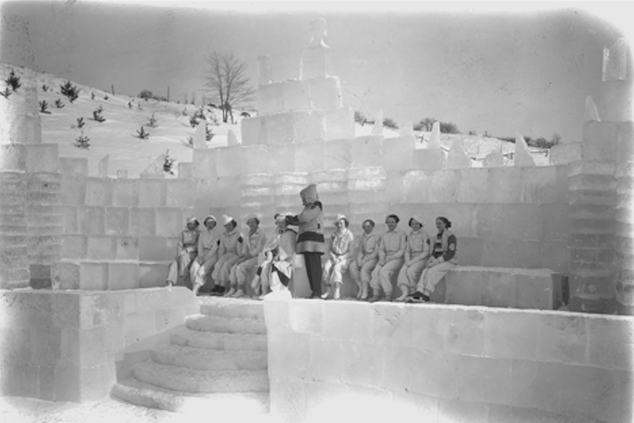 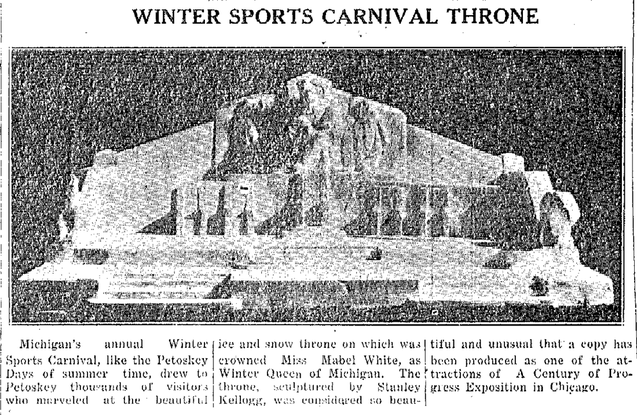 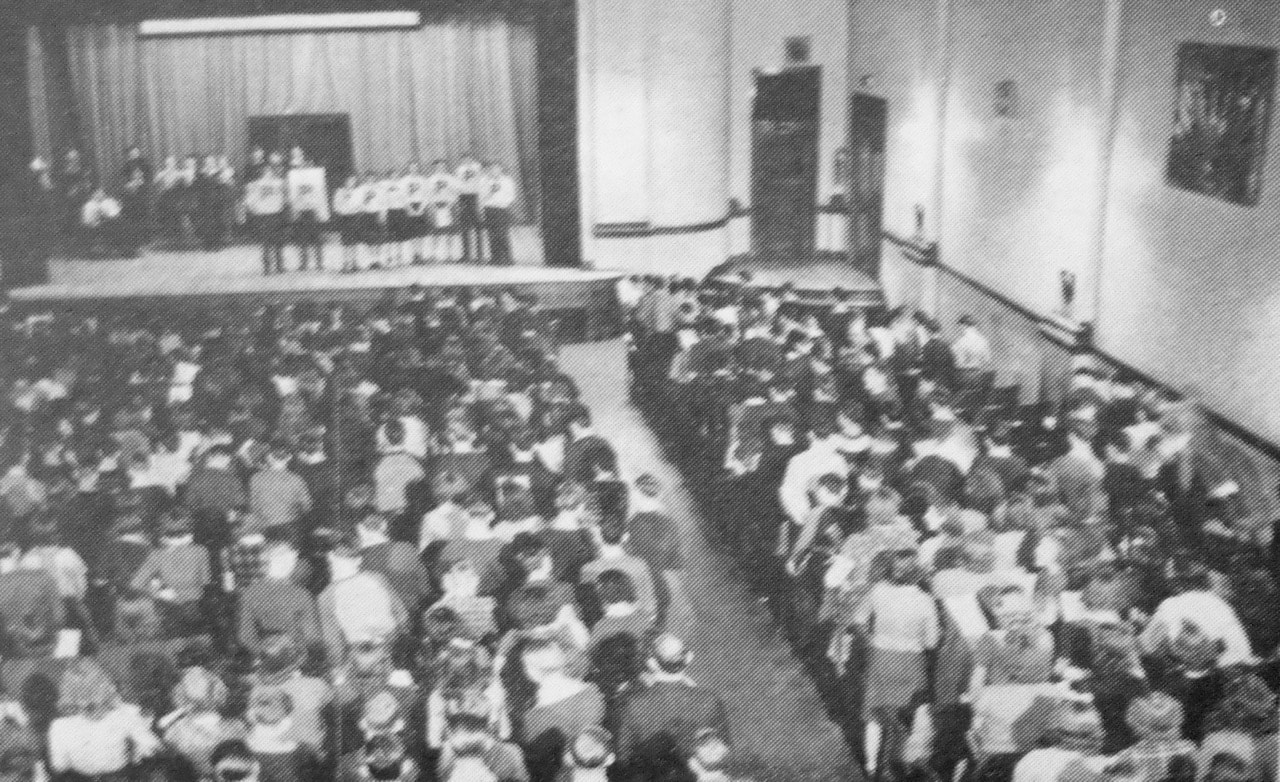 Stanley Kellogg was extremely community-minded as noted in the text and photos below. He had created a scale model railroad setup, and shared its vision through a window display in Stan Sussman's Petoskey store in 1949. Does anyone know where this train setup is now? It seems to have disappeared.
Stanley Kellogg's skill as a sculptor shone forth as illustrated in the 1950 photo and article below of a 30-inch statue of a Boy Scout Bugler. Kellogg's talent was obvious by the time he created the relief plaque of historian Bruce Catton.
Article Below: The Missing "Bugler Boy" was still being sought in 1972... 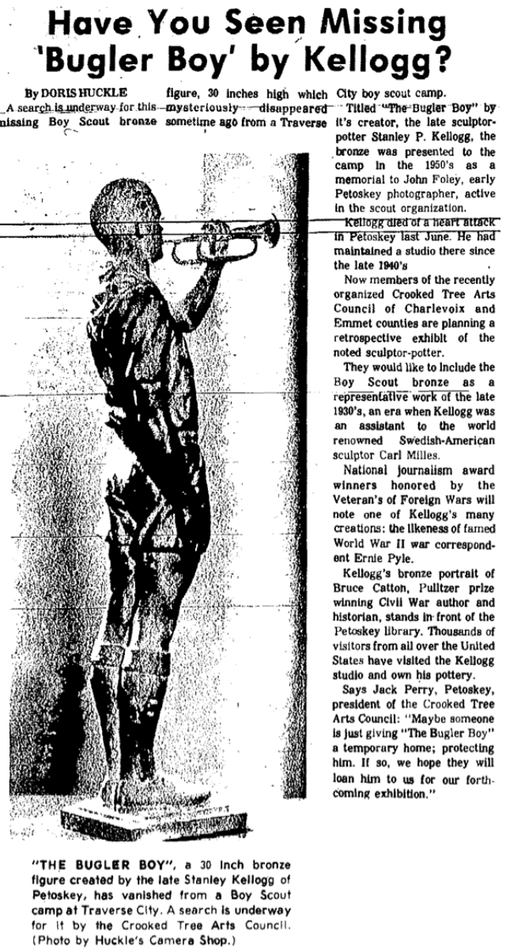 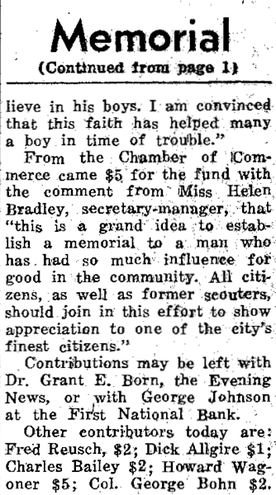 11 February 1950 ~ Petoskey Evening News ~ 3
By the time of the publishing of the 16 February 1950 Petoskey Evening News, the Foley Memorial Award Fund had reached its goal. "The speed in which the money was contributed voluntarily was an expression of the community's appreciation of the 40 years Mr. Foley has given to the scout movement."
Mr. Foley had stated in the paper the day before:
"I have been intensely interested in this Boy Scout trophy ever since it was made. I photographed it from every angle and marveled at its perfect figure. I consider it a masterpiece and a perfect reproduction from life of a fine well built Scout.
"I have always been interested in having it cast in bronze, not because of any honor to myself, but because as a masterpiece by Stanley Kellogg, our local sculptor, who through his generosity, gave it to be used as a a Scout trophy..
"It has given years of service, and as it will go back in Scouting in bronze, may it always be an inspiration to Scouts for years to come to press on in service as it is amplified in the Scout oath."

A family member of Stanley Kellogg has noted that yes, the plaster piece was cast into bronze, and then placed at the Camp Grelick (Boy Scout Camp) near Traverse City. Unfortunately, in later years it was stolen and never replaced. Stanley Kellogg's son has the original plaster sculpture.
Article Below: A brief biography of Stanley P. Kellogg in the 1951 Chicago Tribune article.
Stanley Kellogg served on the Board of Education in 1951-1952 at the time when Petoskey MI Lincoln Elementary School was erected. It was at that same period of time that the Central PTA commissioned Stanley to create a vase for the Lincoln PTA, with hand paintings of the original 1896 Lincoln School building, as well as a painting of the newly erected 1952 Lincoln Elementary School building as seen in the slideshow of photos below. The vase is still intact in the main office of the Lincoln Elementary School. 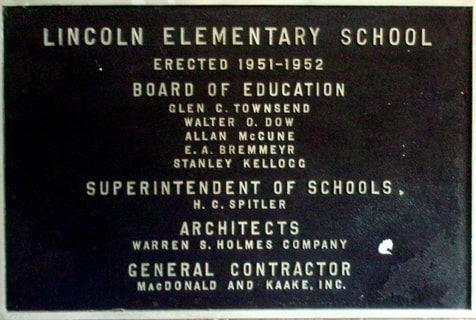 During August 2015 Stanley Kellogg's son-in-law Dick Strader, a member of the National Storytelling Network, told the story of Kellogg's life in first person. Dick Strader gave his presentation, in conjunction with a display at the Charlevoix Circle of Arts at 109 Clinton Street in Charlevoix MI. The display included the various subject matter of Stanley Kellogg as shown in the slideshow photos below which were submitted by Dick Strader.

Reported in the Petoskey District Library Annual Report 2012
Additional information about Stanley Kellogg may be accessed
on two more web pages by this same web master by clicking
HERE for Art & Authors
HERE for People
Wikipedia explained the parentage of Charles Bruce Catton: "Charles Bruce Catton was born in Petoskey, Michigan, to George R. and Adela M. (Patten) Catton, and raised in Benzonia, Michigan. His father was a Congregationalist minister, who accepted a teaching position in Benzonia Academy and later became the academy's headmaster." 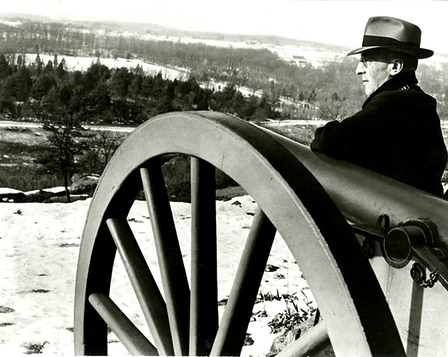 Bruce Catton ~ Philadelphia Inquirer
The 20 August 1956 Life magazine had a wonderful article (with many photos) on page 19 written by Petoskey's own Pulitzer-Prize author Bruce Catton titled "Muffled Roll for Grand Army ~ The Death of the Last Union Soldier and of an Era". 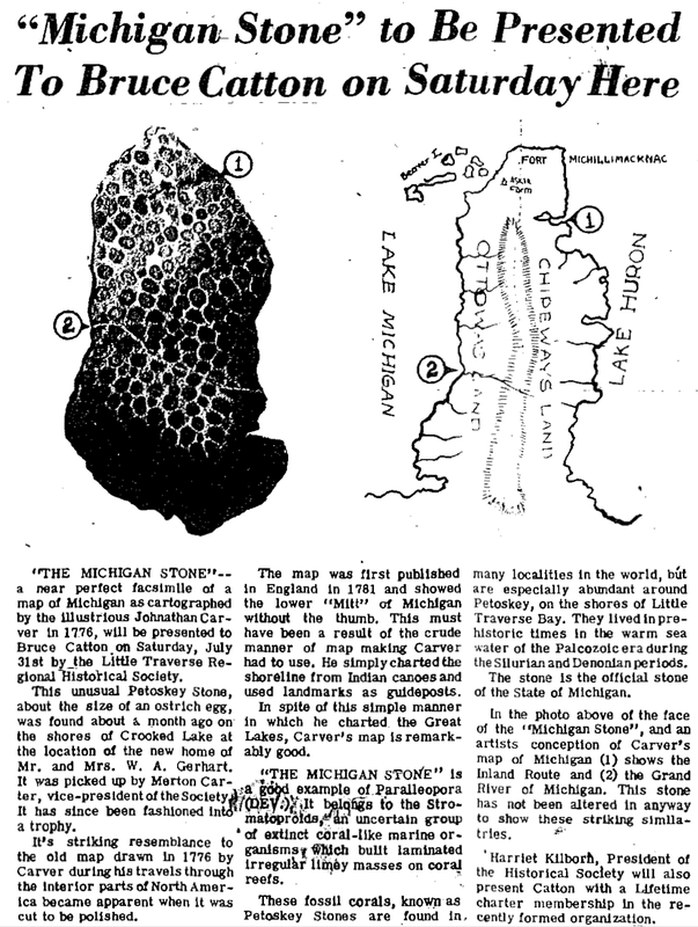 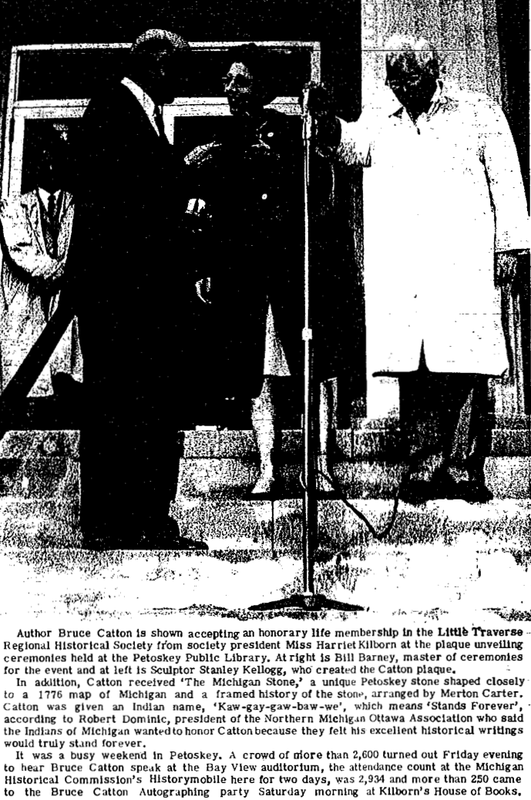 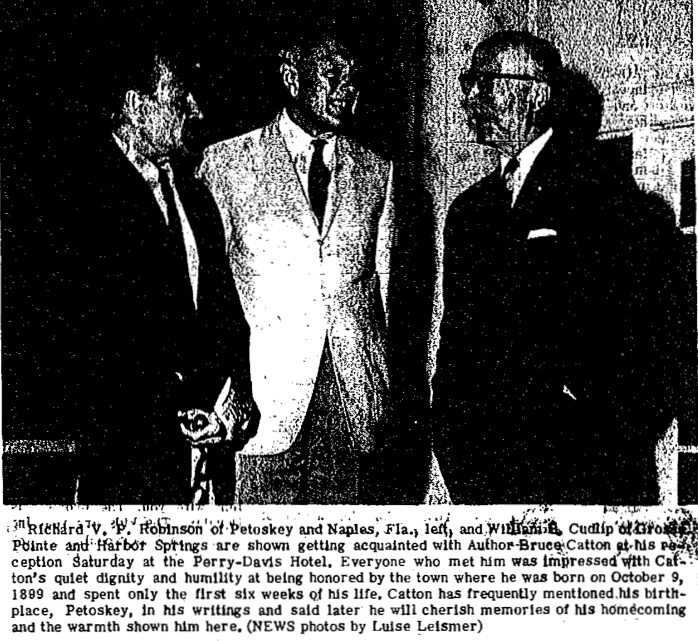 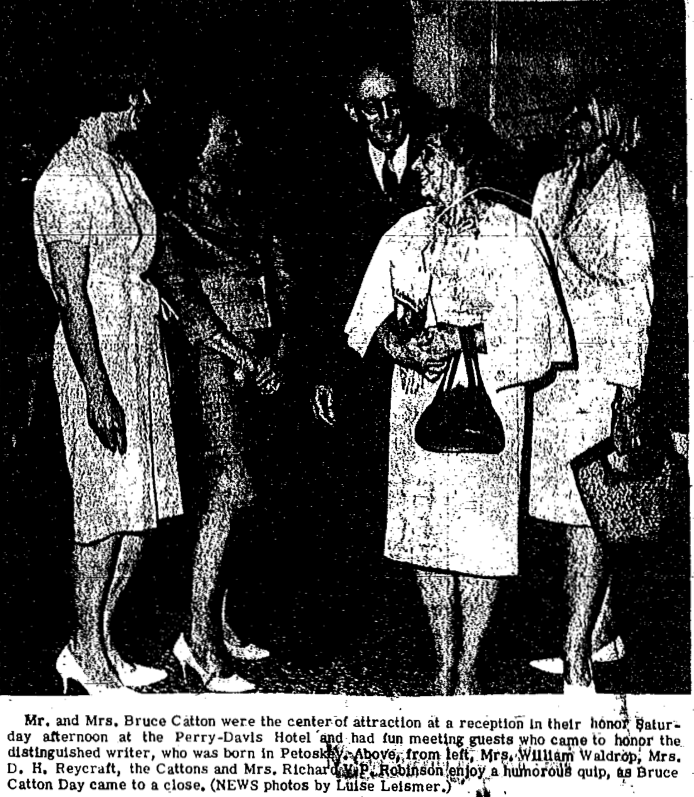 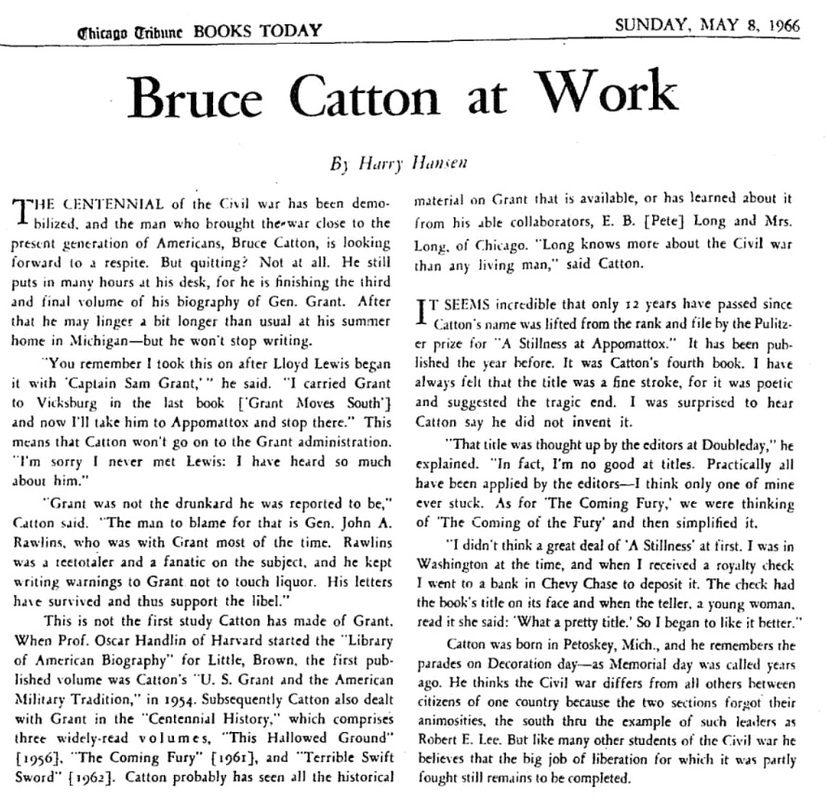 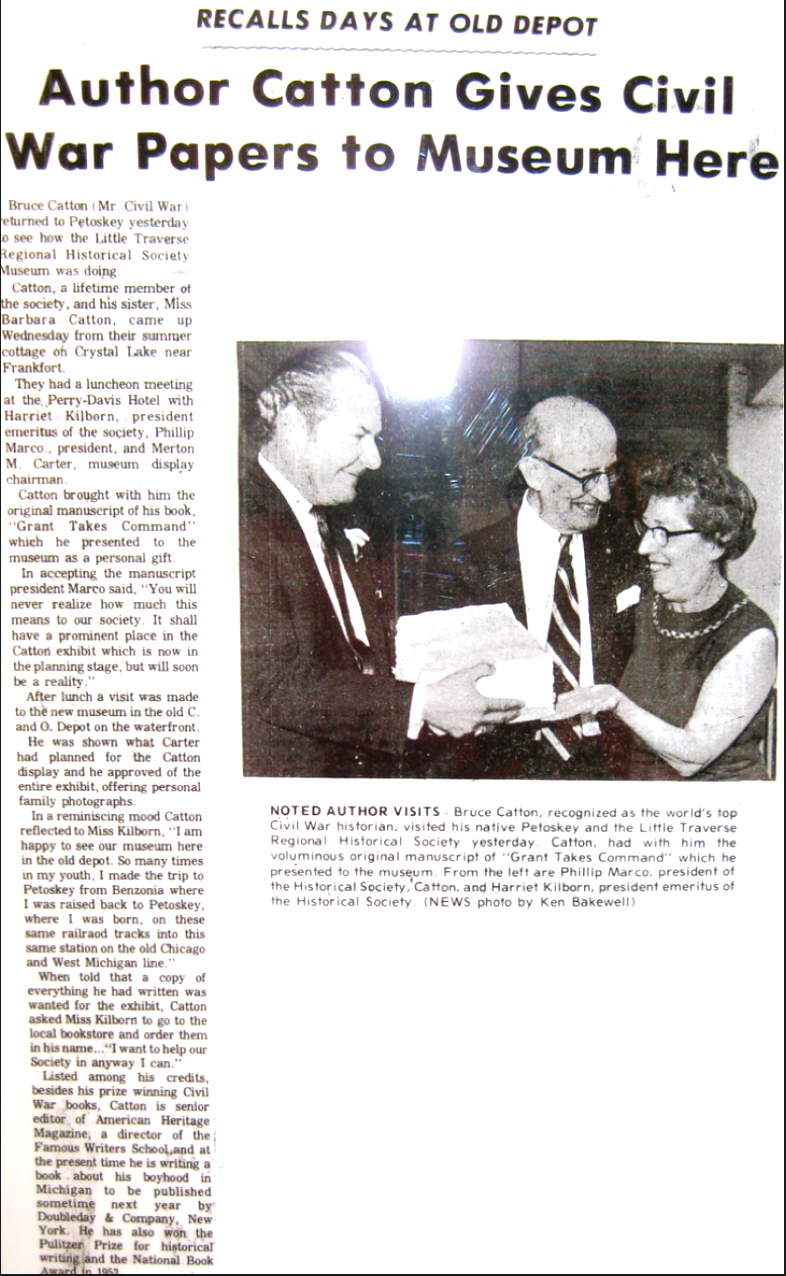 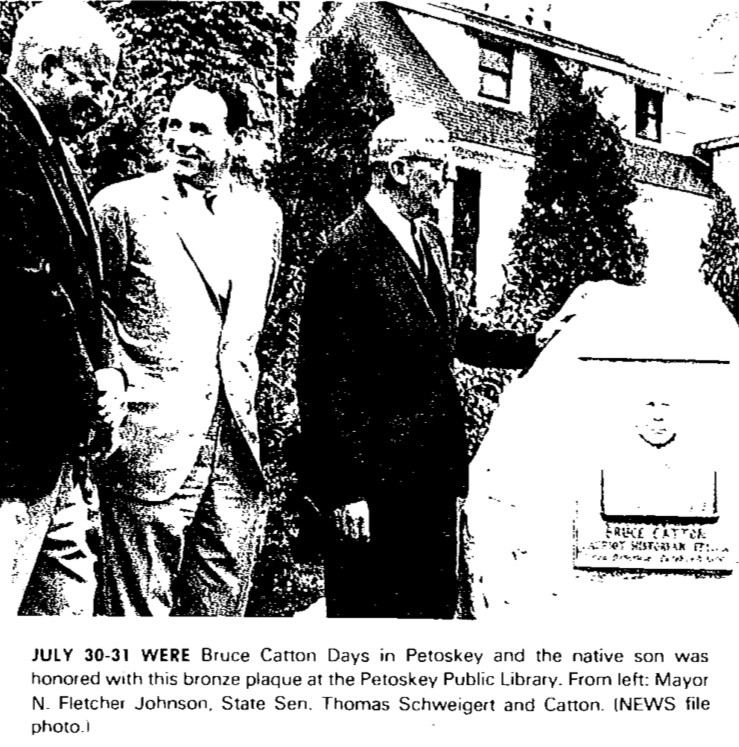 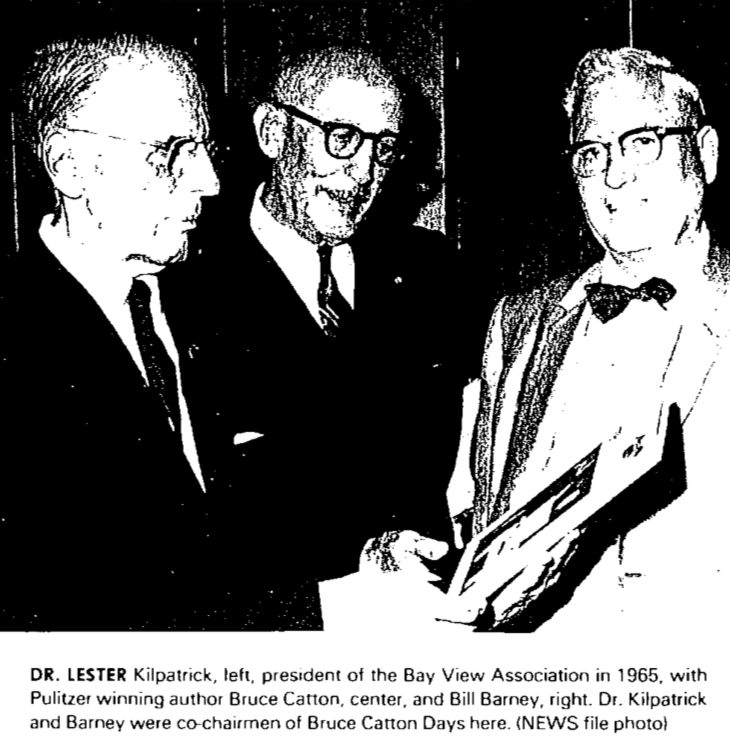 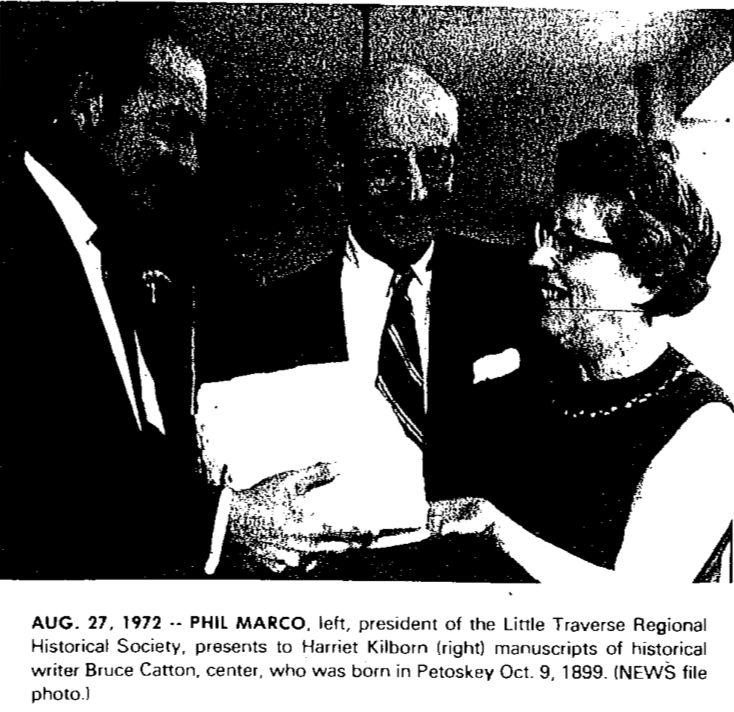 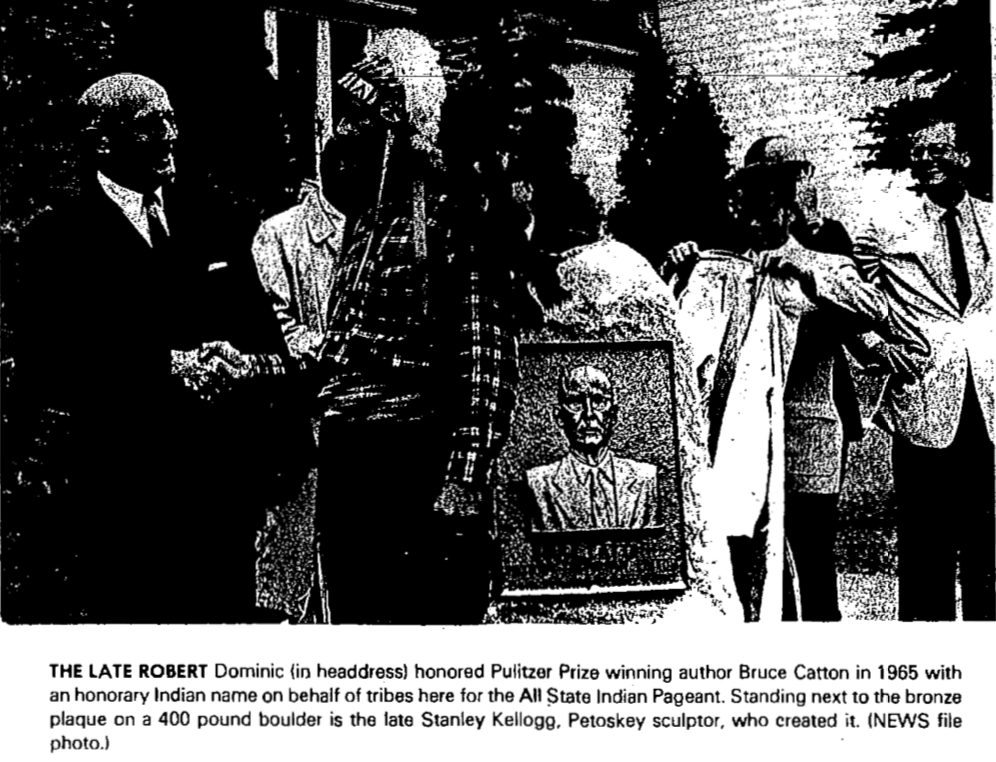 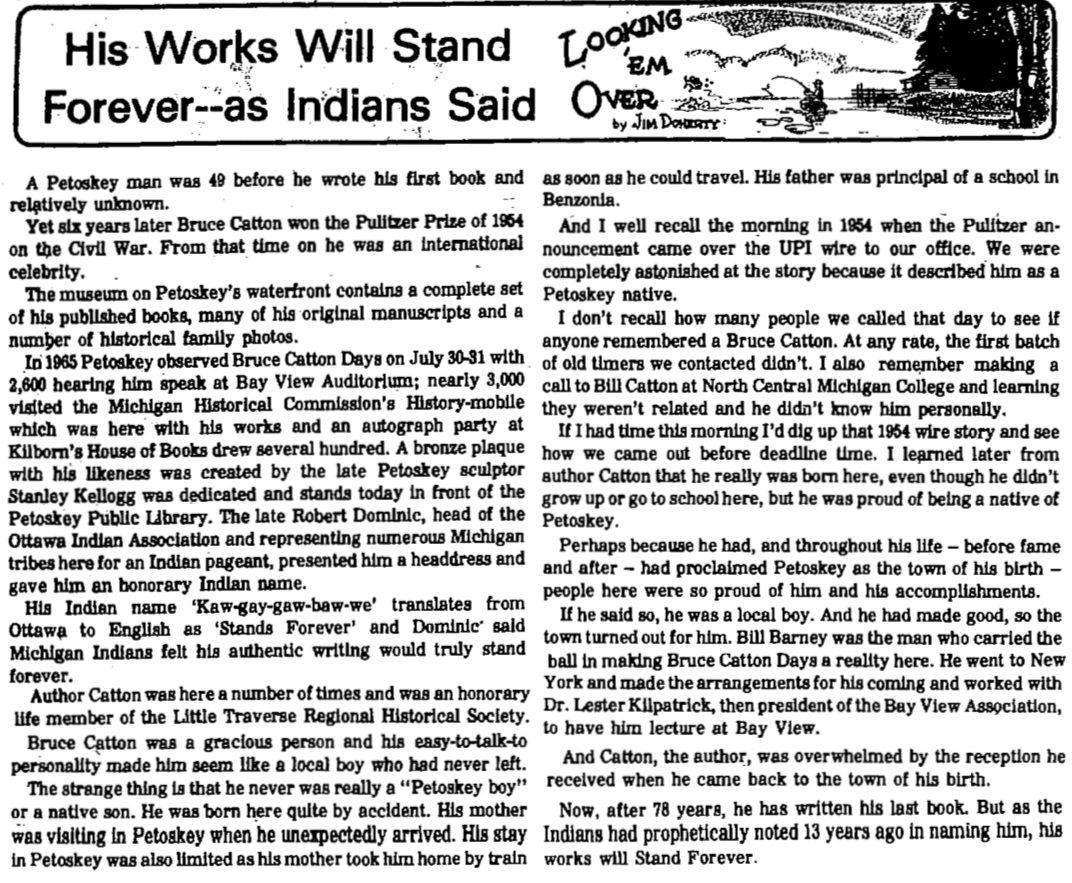 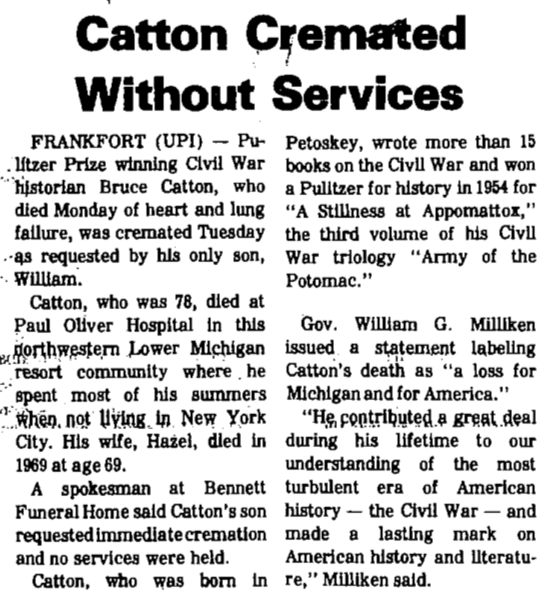 1 November 1999 ~ Petoskey News Review
An interesting blog about the life and writings of Bruce Catton may be accessed by clicking HERE.
View other site categories from the drop down menu above.
TOP