Please do not copy the photos on this site, many of which have been submitted by private individuals...
just come back and visit the site often to view the photos.
"Clicking" on some color highlighted words may access additional information.
Most posted items will enlarge by "clicking" on them.
Harry Truman was the only American President to serve in combat in WWI.

Article Below: Alexander Campbell of Boyne City Holds World's Record as a gunner in the American Navy. 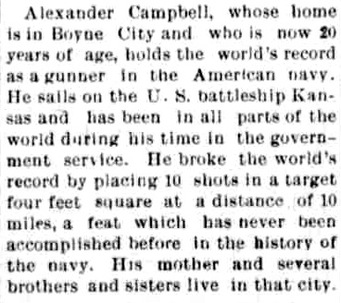 2 July 1910 ~ Charlevoix County Herald (East Jordan newspaper)
The photos below were taken by Karla Howard Buckmaster.
The vest and tie were located in the
Boyne City MI Historical Museum which was located inside the City Hall.
The admission was free. For more information call 231-582-6597.
​
The Boyne City History Museum, however, is presently closed
while it is in the design phase for a new museum space.
Boyne City MI Historical Museum 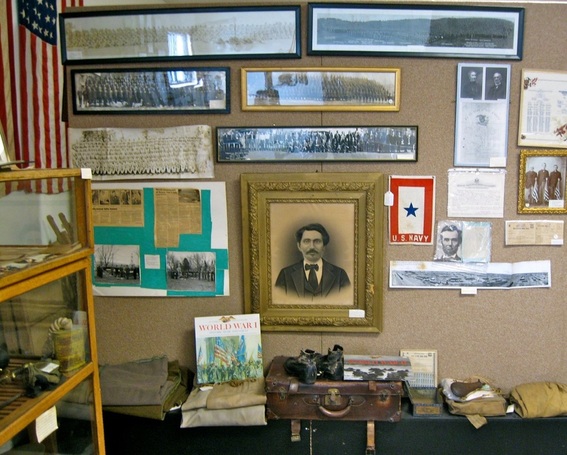 The photos below are close-up photos of the long framed panarama above the large photo in the center of the above photo. The glass made for many reflections, and blurriness in the photos, but perhaps the men can be seen well enough to identify, and to realize a trip to the Boyne City Museum would be of value, once the museum is again opened.

Title on the long photo described above
The six photos below are close-up photos of the long framed panarama above the large photo in the center of the above photo. The glass made for many reflections, and blurriness in the photos, but perhaps the men can be seen well enough to identify, and to realize a trip to the Boyne City Museum would be of value.

The 23 August 1918 Charlevoix County Herald in the article directly below must be a listing of the men who are shown in the six photos below the article. Perhaps this newspaper article will help with identification of the men in the photos which did not have the men identified. At least from the news article the total names in the photos are listed.
A copy of the same photo as above hangs in 2015 in the hallway entry to the Charlevoix County Building in Charlevoix. The photos below are of the same photo, so similar to some of the above photos, but may be of different quality, due to reflections in the glass. View the slideshow below which may be stopped for in-depth viewing by clicking on PLAY in the upper left corner.

Take Underwear Suitable for the Season 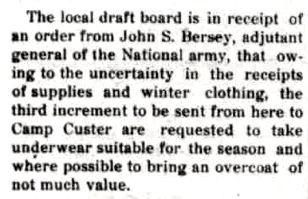 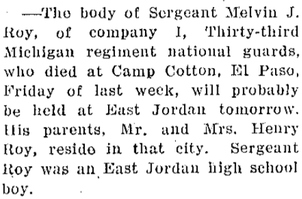 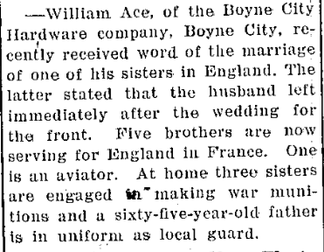 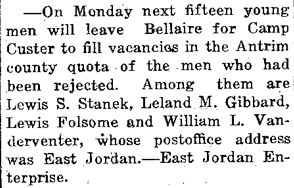 16 January 1918 ~ Petoskey Evening News
Leland M. Gibbard died 10 October 1918, only months after he was drafted.
He died in Morbihan (Brittany) France.
Leland Gibbard died from diabetes mellitus according to his burial card (attached documents). A study has revealed that at least 20 soldiers who had been stationed in Camp Custer, with all leaving at the same time (30th and 31th July 1918 from New York), died in September, October, and November 1918 from broncho pneumonia, lobar pneumonia; probably the Spanish Flu which prevailed at that time. 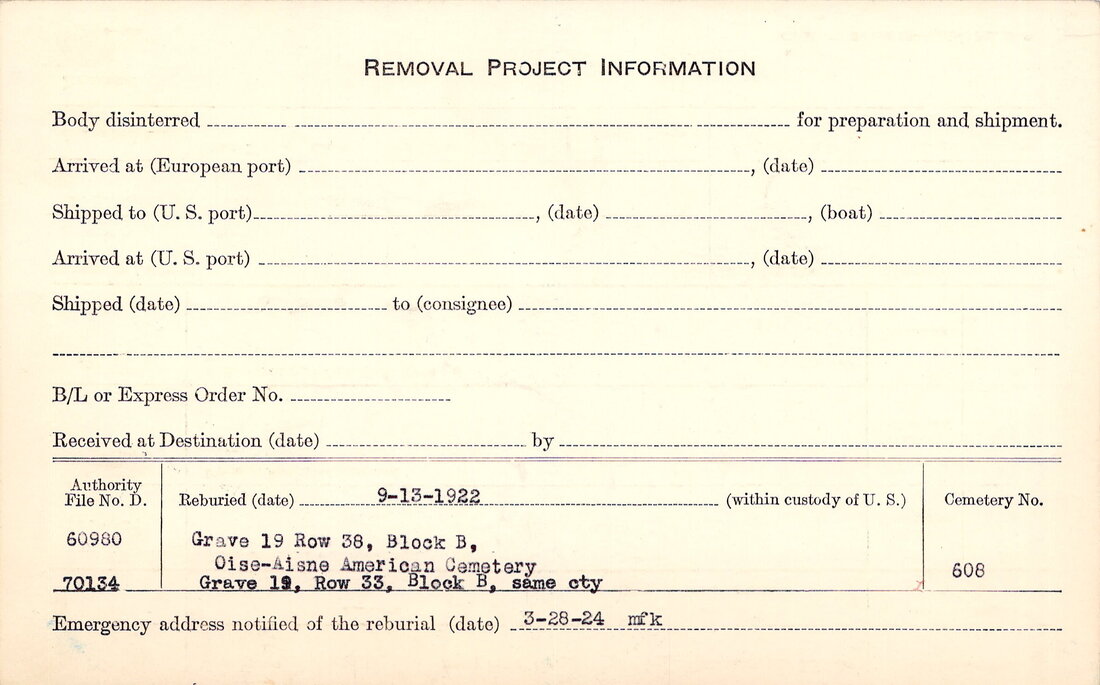 Leland Max Gibbard was born December 14, 1895, on the farm where his parents Mr. and Mrs. Charles Gibbard now reside. He died in France October 10, as the result of Diabetes, after being in the hospital one day. He was called to Camp Custer on the thirtieth day of last January, and was sent to France during the month of August. Besides a loving father and mother, he leaves three brothers, one of whom is at Camp Custer, three sisters, and a host of friends to mourn his demise. Memorial services were conducted in his honor at the Pleasant Valley school house, Sunday, November 17, at 2 o'clock, at which time Rev. Exner of Bellaire, delivered a very touching and appropriate address. 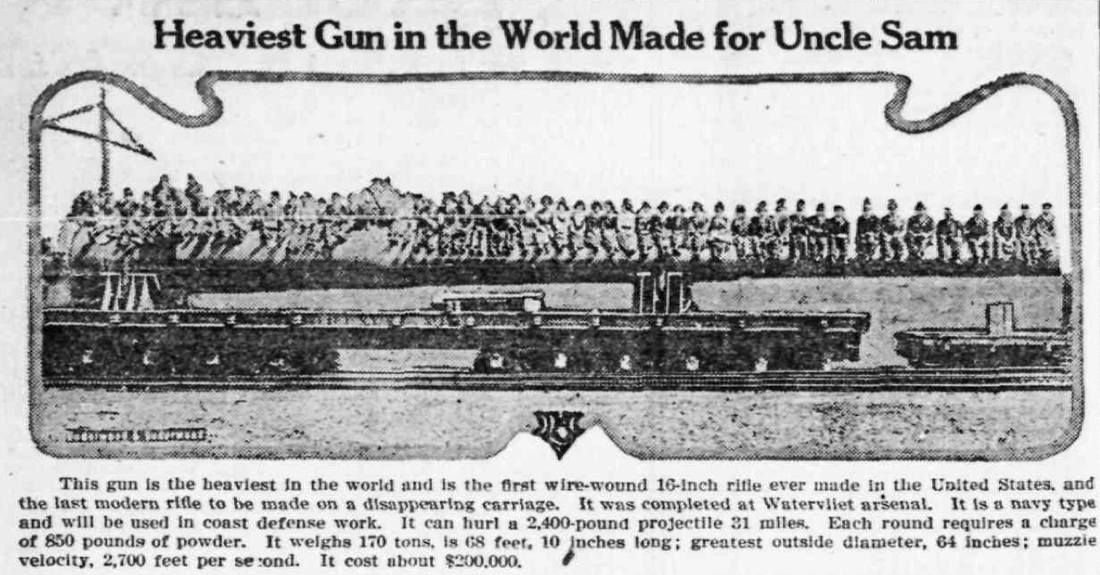 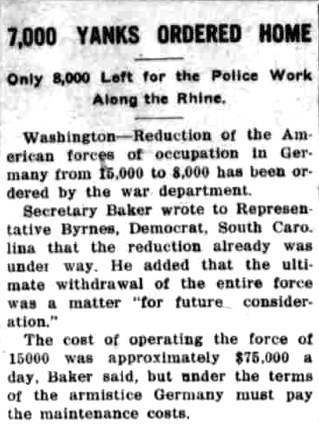 Obituary Below: Corporal Sedgman died after being wounded in the Mense Argonne Battle. 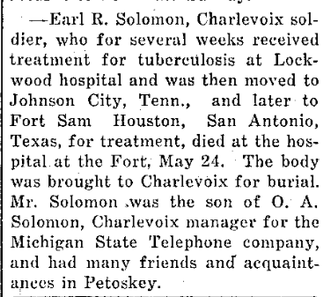 1 June 1922 ~ Petoskey Evening News
Obituary Below: Otto Herington who served in both WWI and WWII
died in Dearborn in a Veteran's Hospital. 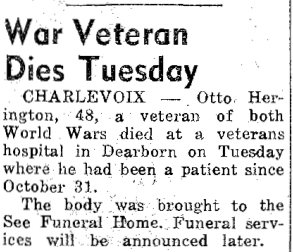