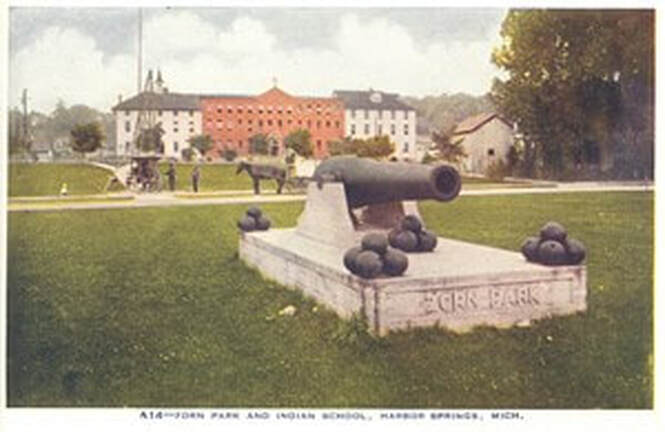 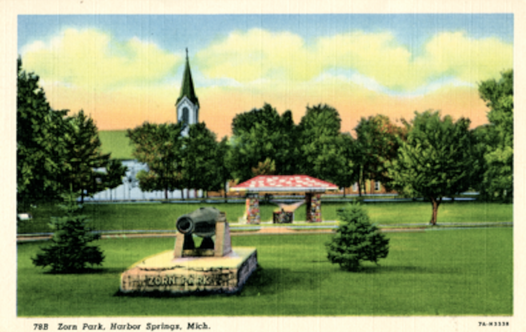 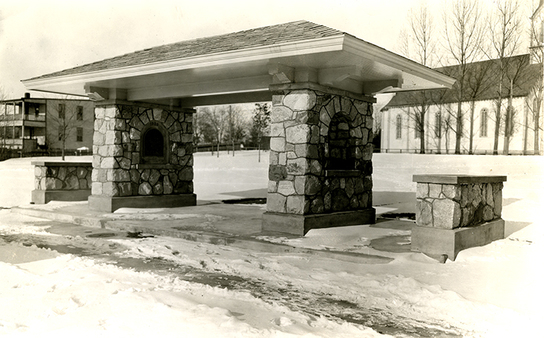 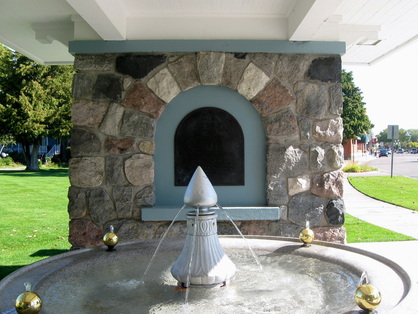 From the two 1951 articles below it seems that the WWII memorial was dedicated on Memorial Day 1951.
Above photos were of WWI on the left, and WWII on the right. 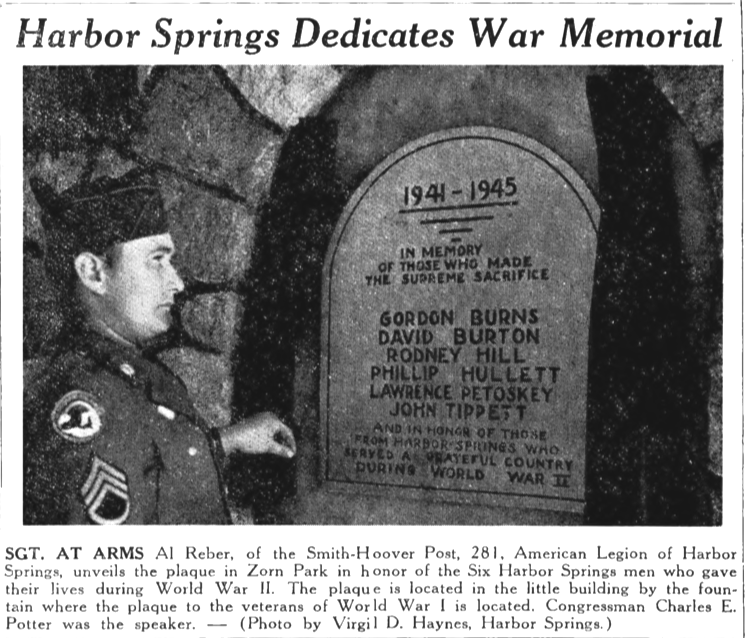 28 May 1951 ~ Petoskey Evening News
Article Below: The cannon and balls arrived in Harbor Springs 15 December 1909.

A wonderful, and through description, exists on-line for the...
~ Harbor Springs Civil War Cannon ~ 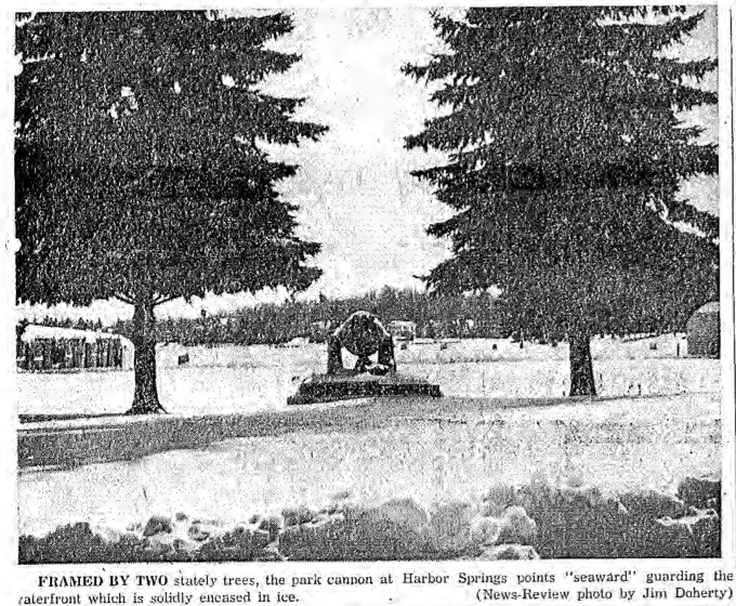 17 February 1960 ~ Petoskey News Review
The cannon located in Zorn Park in Harbor Springs MI is a IX Dahlgren Shell Gun Cannon. This cannon has similar markings to the IX Dahlgren Cannon located across Little Traverse Bay in Petoskey's Pennsylvania Park. The cannon originally had, as a part of its display in Zorn Park, 20 cannon balls placed around it; four cannon balls at each corner, and another four in front directly under the barrel. Over the years the cannon balls have disappeared. Does anyone have any knowledge of the whereabouts of any of the cannon balls?
Photo Below 31 October 2018: Have the missing cannon balls been replaced
by rock cairns placed under the Zorn Park cannon? 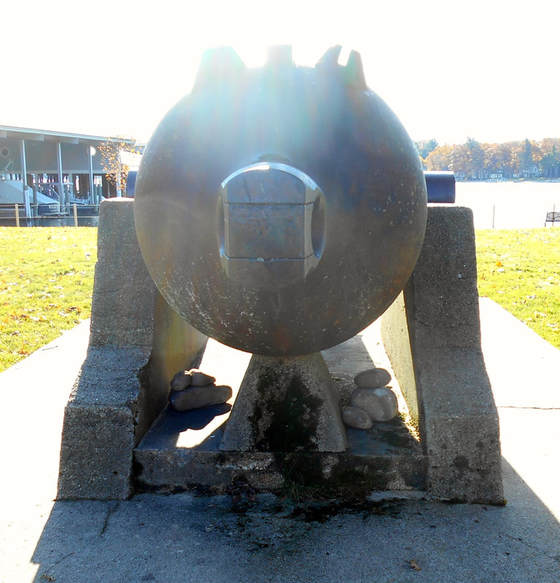 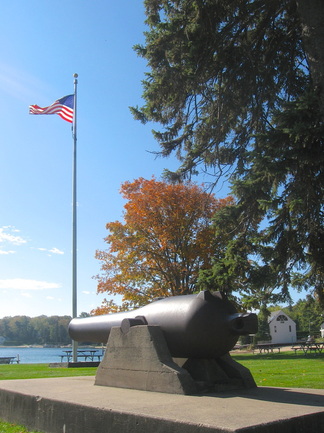 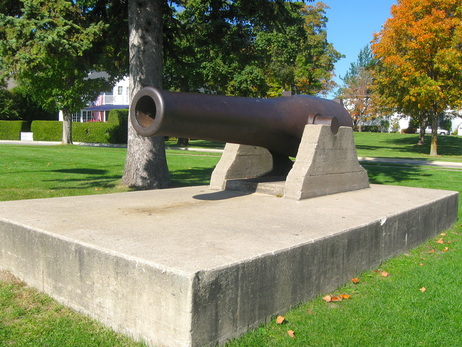 Markings on the 9" Cannon

~ Zorn Park Plaque for the Cannon ~
2017
The 7 September 2017 Petoskey News Review's Jillian Fellows reported: The Harbor Springs Area Historical Society members plan to install a plaque on the cement structure of the IX Dahlgren Shell Gun Cannon's base. David Lyle, a trustee for the society, spoke about the cannon saying that "It was installed by veterans back in 1909 and 1910 in Harbor Springs and we want to honor them." The photo of the cannon included with the article plainly showed at least two cannon balls placed on the cement structure close to the barrel of the cannon.
~ Zorn Park Plaque for the Cannon ~
2018

28 May 2018 ~ Memorial Day
Photos Above and Below: The cannon can be seen closer to the water as viewed through the opening of the fountain memorial... beautiful setting. 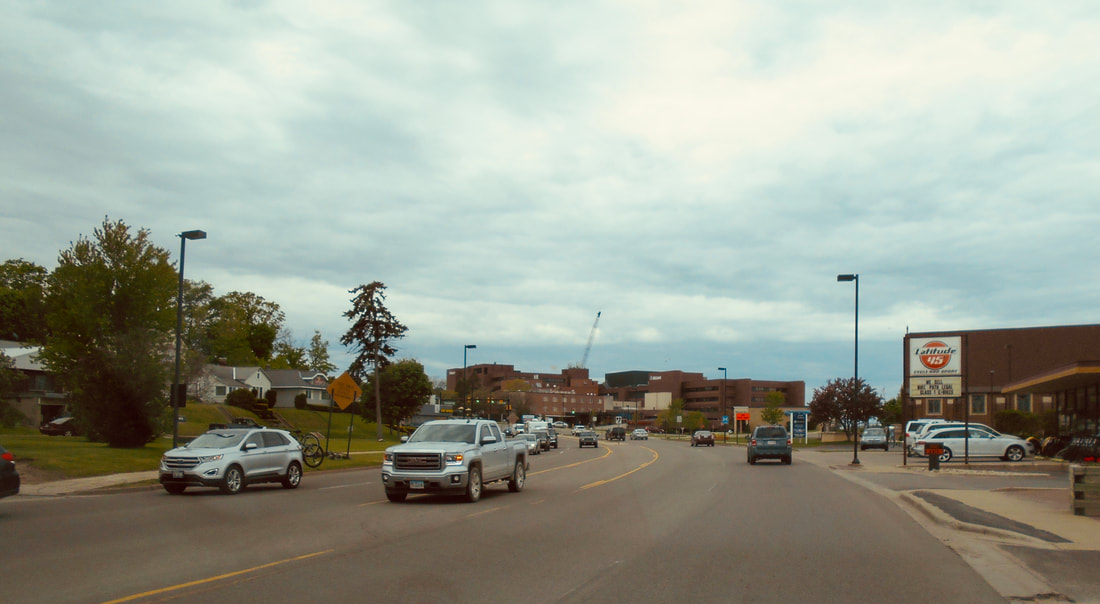 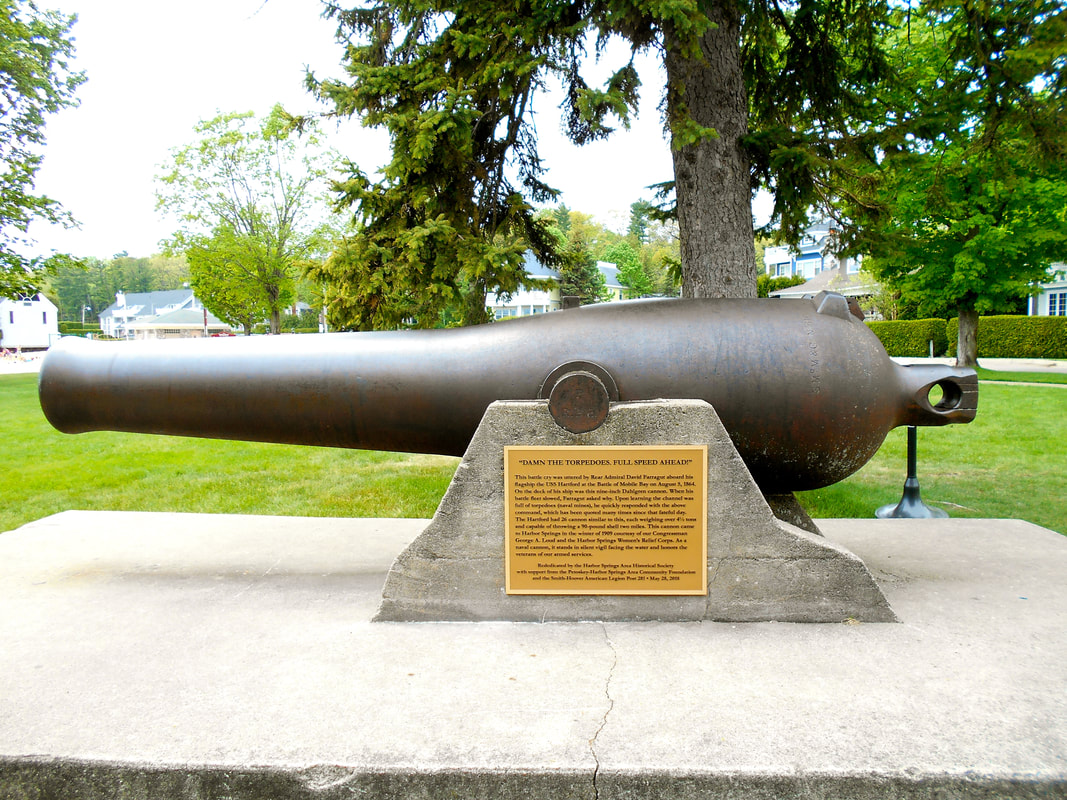 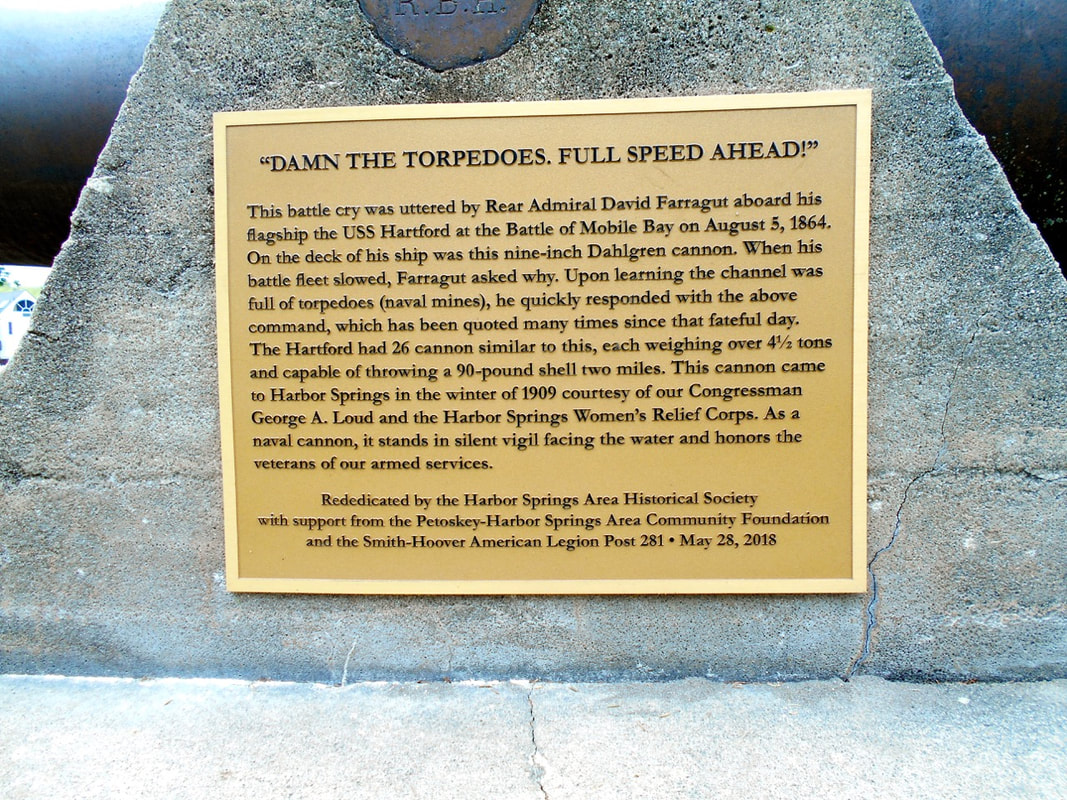 28 May 2018 ~ Memorial Day Cannon Plaque Dedication
It is interesting to note that the 24 May 2018 Petoskey News Review article with a Harbor Springs byline stated the following: "The Dahlgren cannon saw service in the Union Navy during the Civil War aboard the USS Powhatan." The above photo of the plaque attached to the same cannon, states that the cannon was on the USS Hartford at the Battle of Mobile Bay on August 5, 1864.

Does anyone know an explanation for this cannon reportedly having been on two different ships? [See answer below.]
26 September 2018: It has been learned that the plaque in the photo above is inaccurate. A researcher has found documentation in Washington DC that this particular #610 Dahlgren cannon truly had been on the Powhatan, rather than on the USS Hartford. Another plaque has been purchased and is now on display. Below: A new photo of the new plaque was taken 31 October 2018! 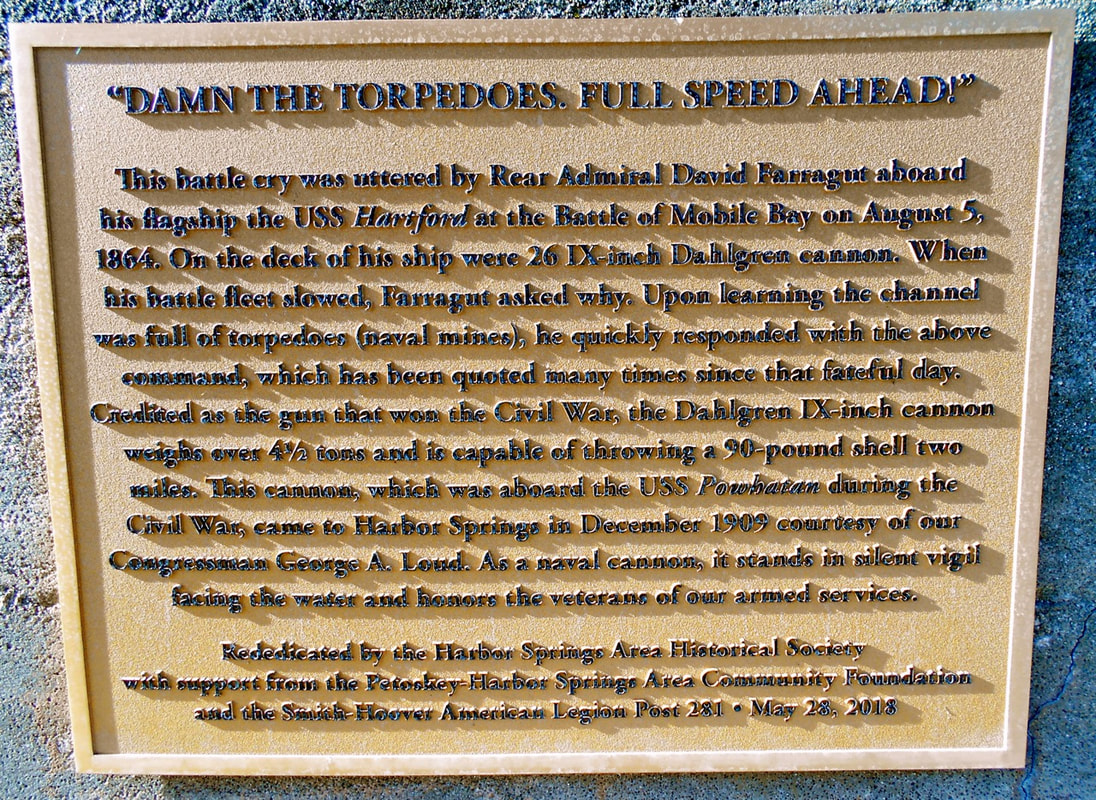 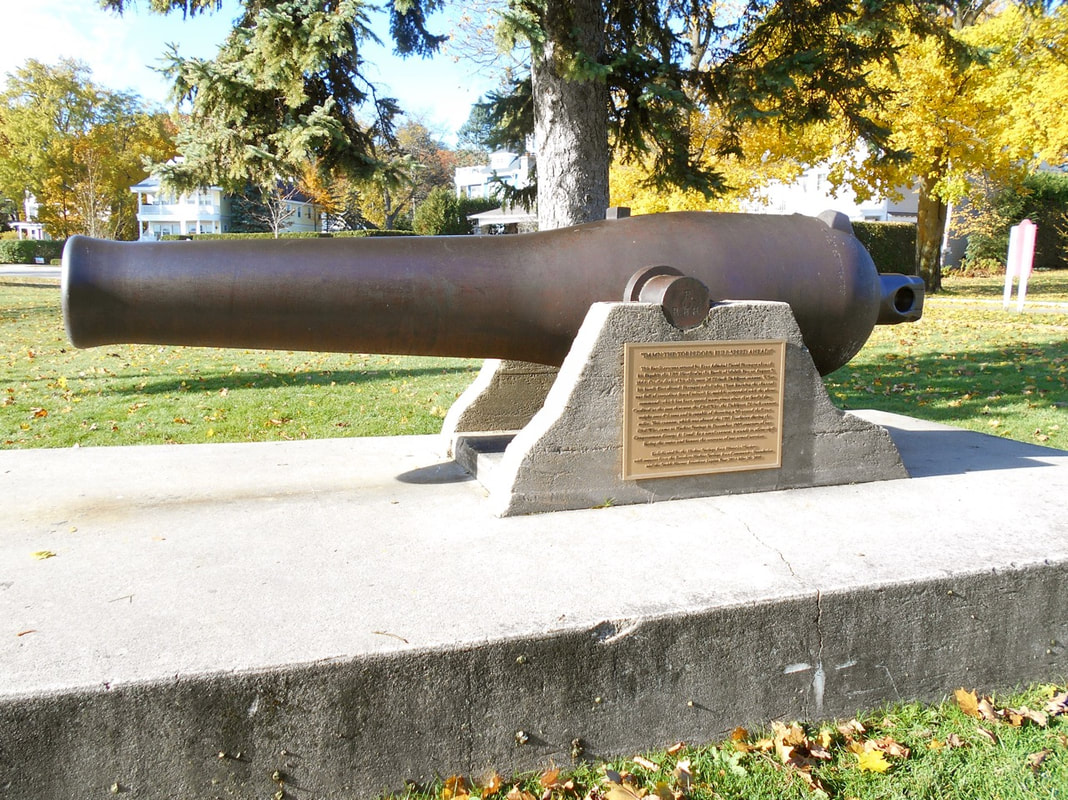 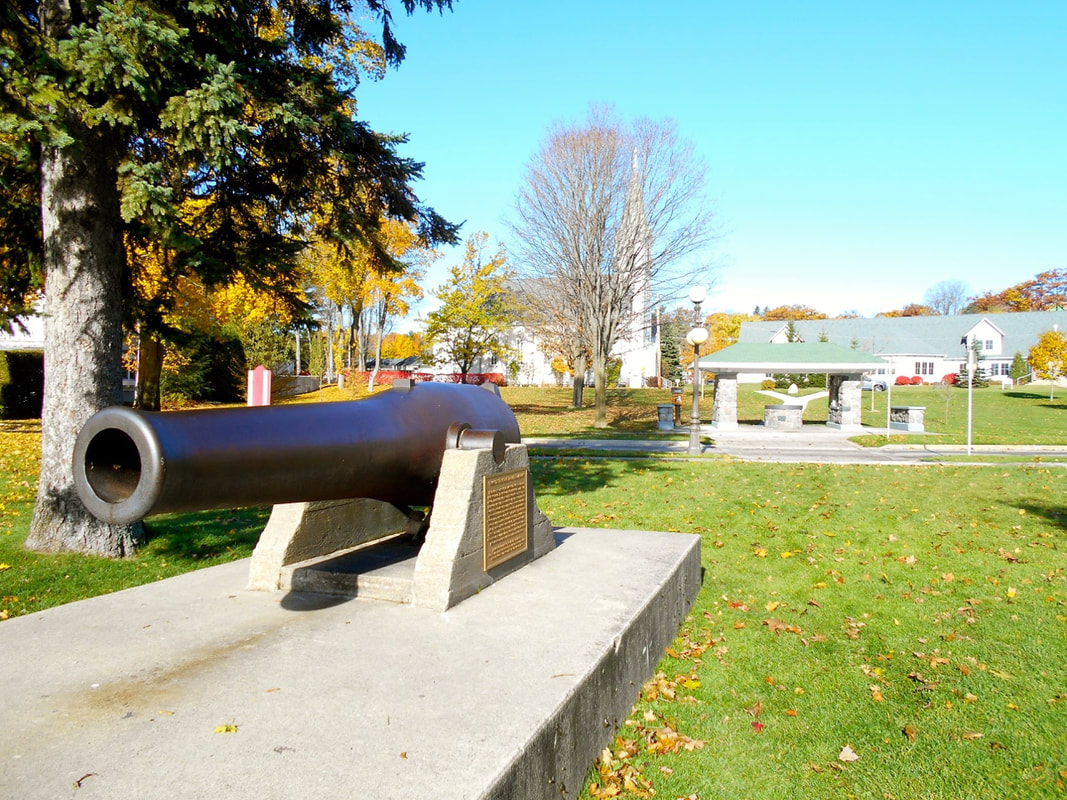 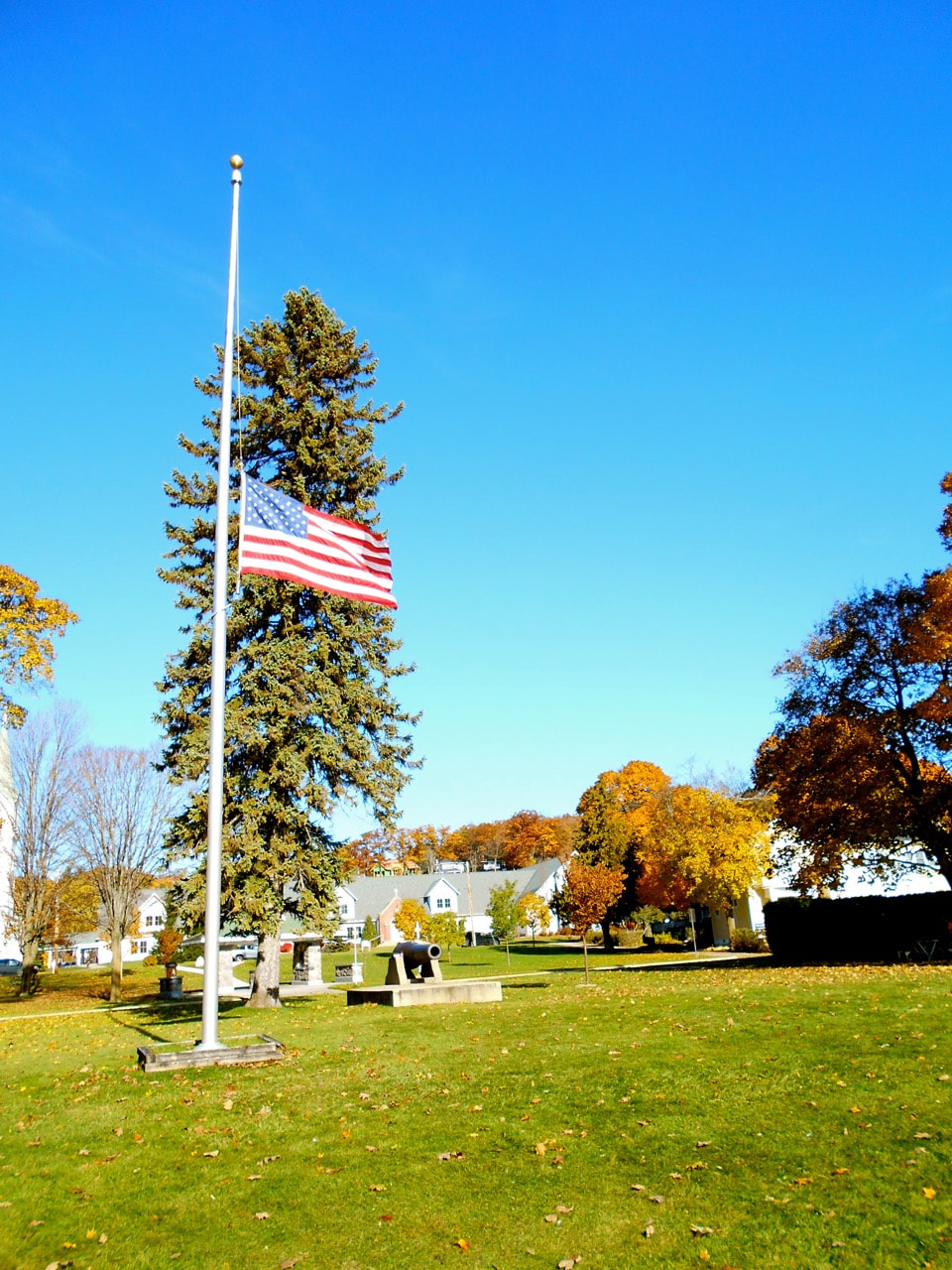 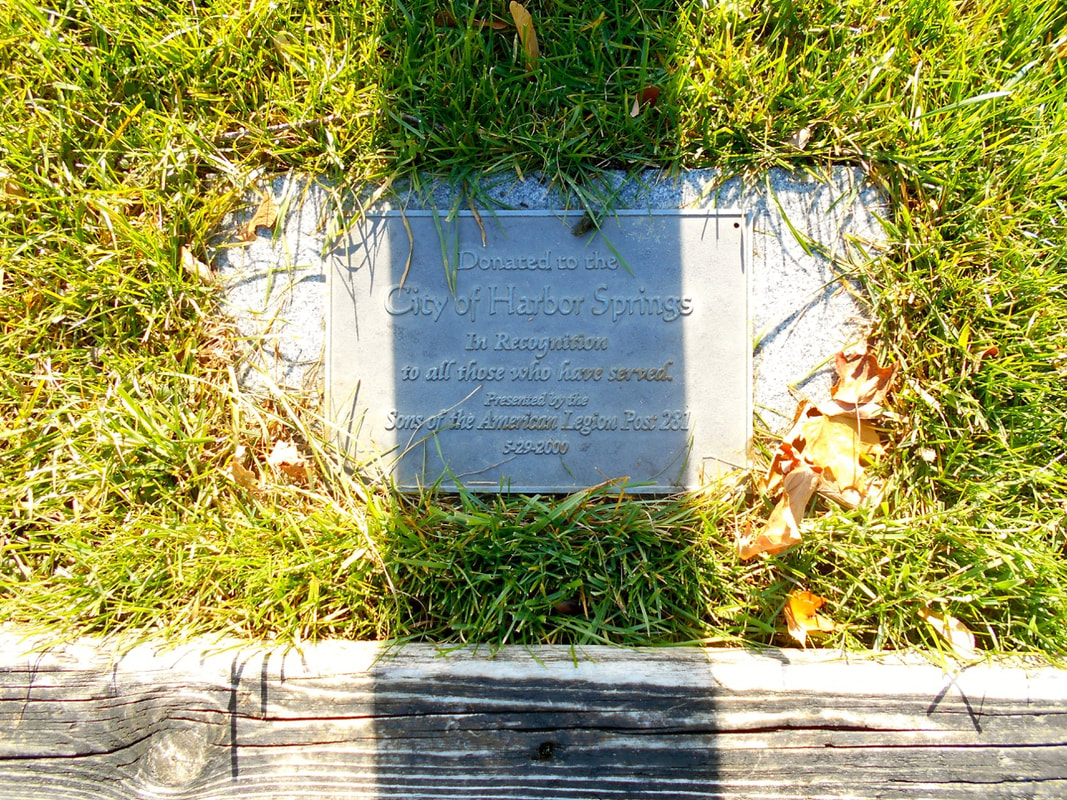 31 October 2018 ~ The dedication plaque is in the ground at the foot of the Zorn Park memorial flag which stands proudly near the cannon...
~ Namesake for Zorn Park ~ 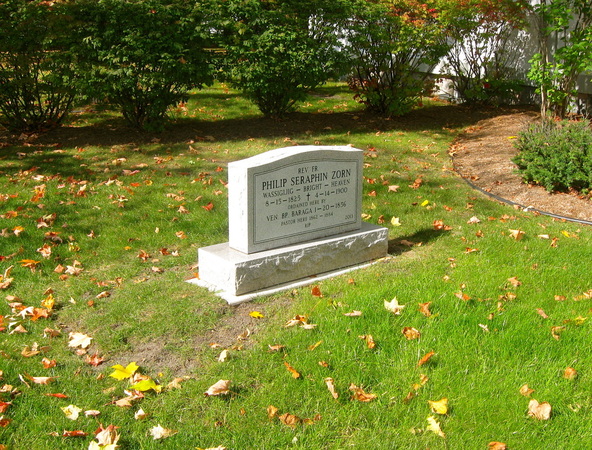 ~ 1 October 2013 ~
The memorial for Reverend Philip Seraphin Zorn rests next to the Holy Childhood of Jesus Church in Harbor Springs MI. Although nearby Zorn Park was named for Reverend Zorn, his remains were only recently, in 2013, returned to his last parish where he labored for so many years.