D.A.R.
The PE-TO-SE-GA CHAPTER
OF THE
DAUGHTERS OF THE AMERICAN REVOLUTION
PETOSKEY, MICHIGAN
1910

G.A.R.
Lombard Post No. 170
Grand Army of the Republic for the State of Michigan
Chartered 11 August 1883 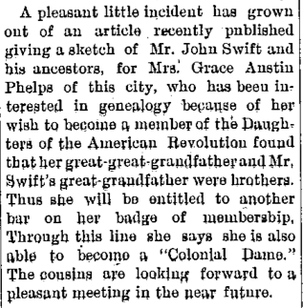 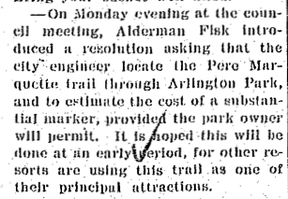 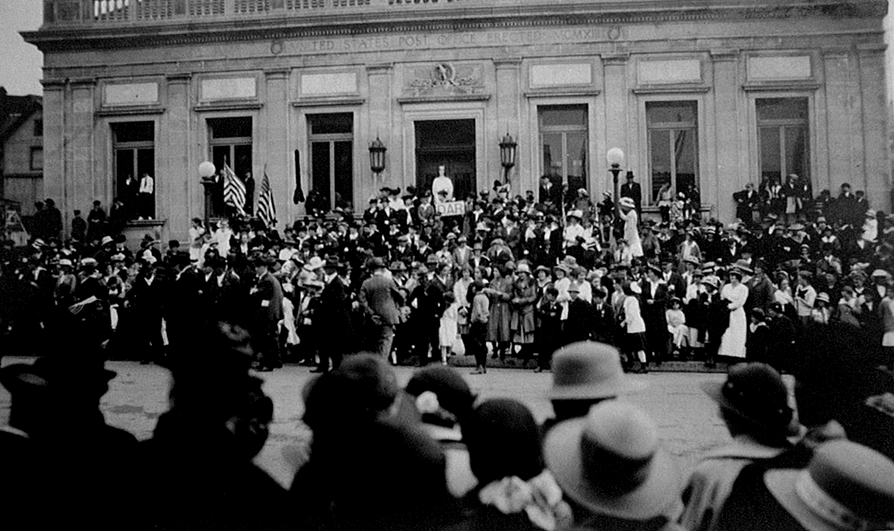 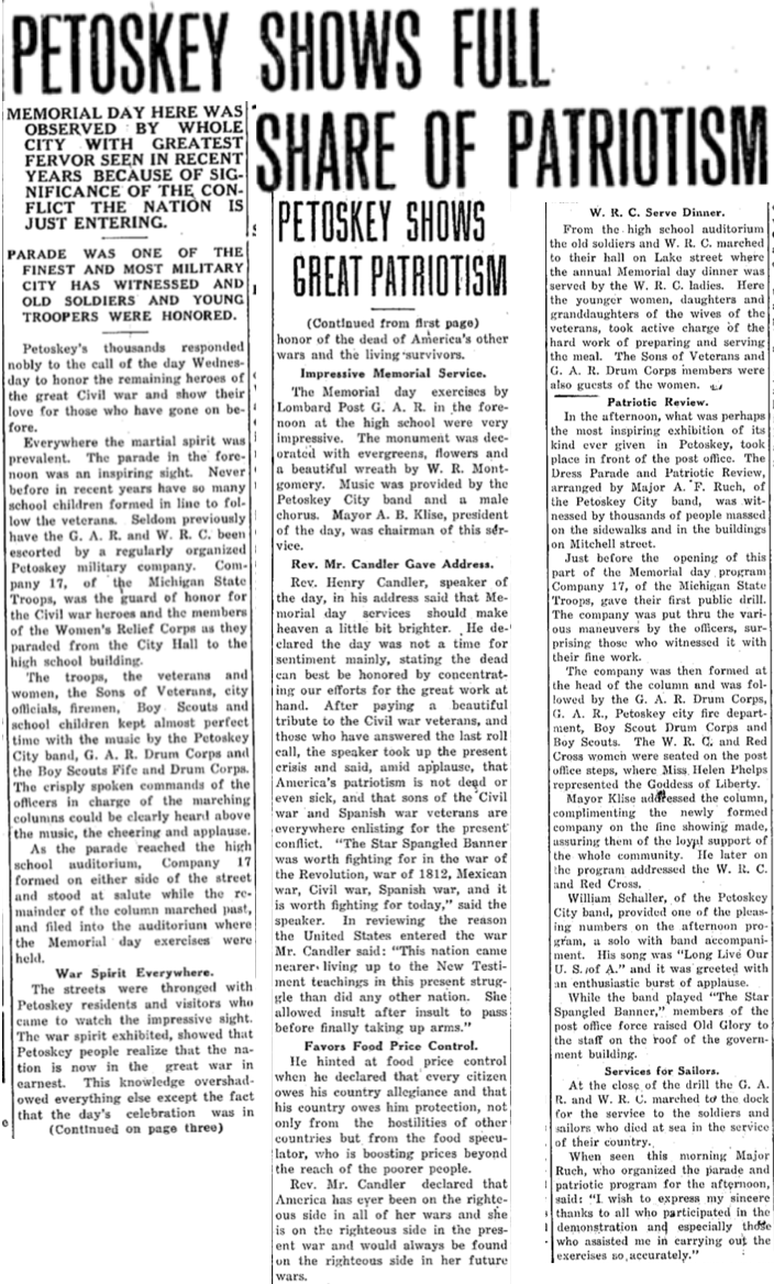 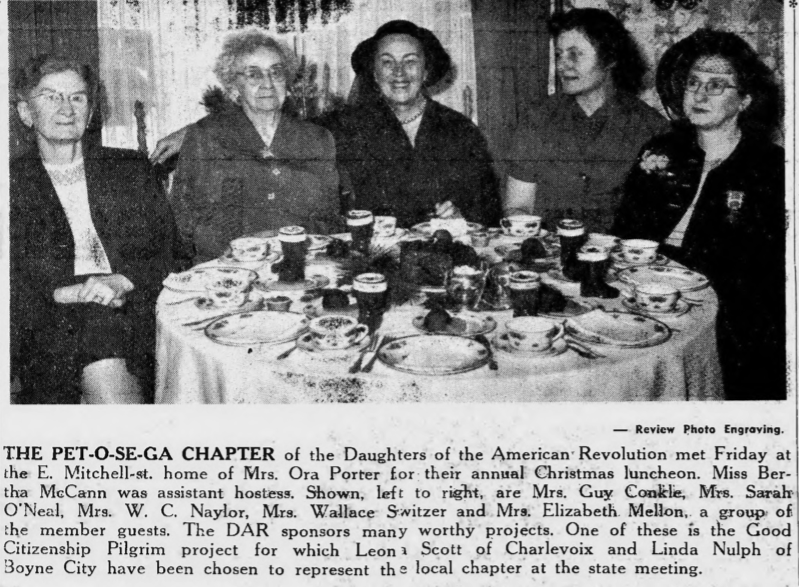 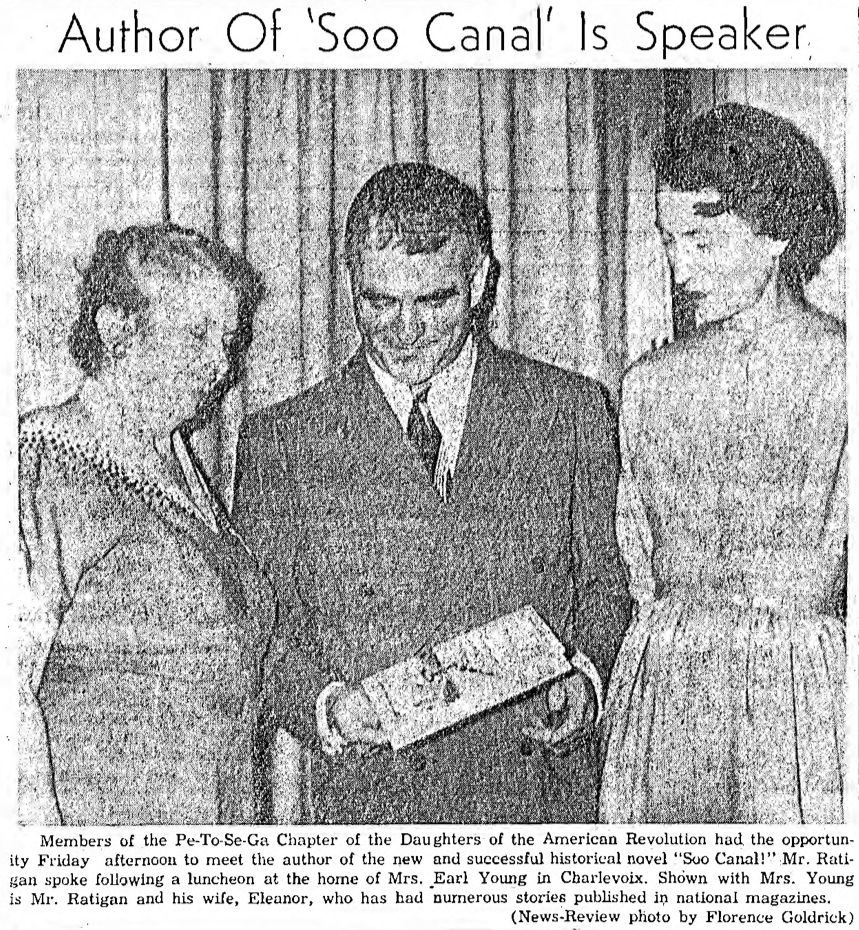 The obituary of Asa W. Aldrich who served in the Civil War stated: He was present at the first meeting of comrades called for the purpose of organizing a G.A.R. post in Petoskey July 4 1883, and at it s first election he was elected senior vice commander. The post here was then known as Petoskey Post, No. 170 G.A.R. 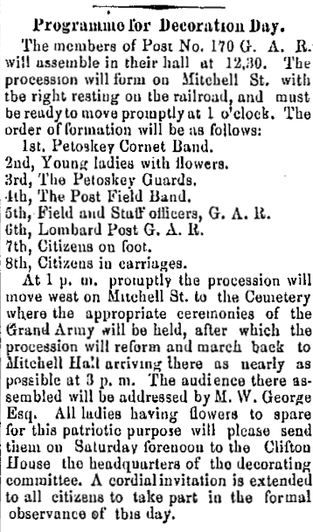 20 April 1963 ~ Petoskey News Review
TOP
Marquette Avenue
(As written on pages 159/160 in The Traverse Region, Historical and Descriptive,
With Illustrations of Scenery and Portraits and Biographical Sketches ~ 1875)
"In the early days of the village [Petoskey] a sign-board was erected over the old trail running through the railroad park [later Pennsylvania Park], and where the Arlington Hotel now stands. Upon the board was an inscription as follows: 'Marquette Avenue. Original trail between Detroit, Grand Traverse and Mackinac, traveled by hundreds of Indians, and over 100 years ago by Father Marquette, the famous missionary and explorer.' The trail was distinctly visible for some distance, and there are numerous persons through this section of the country who have traveled the trail, and in many places its course is marked by a narrow, deep depression caused by the passage of hundreds and thousands of feet. It is hardly probable, however, that the feet of Marquette ever pressed this trail. The romantic interest of tradition is heightened by supposing that such was the case, at the same time such an admission would conflict with more reliable history. Many of these traditions, like relics from the Holy Land, have to be continually manufactured to supply the demand. If Marquette had traveled all the devious ways that tradition has led him, and been buried in the numberless graves over which admiring posterity has wept, he would have needed to possess the quality of ubiquity both in life and death."
Photo Below: Just behind the tennis courts were the railroad tracks from Petoskey heading north to Bay View. Above and beside the tracks was the main road Arlington Avenue going in front of Marie Rowe's home (with the turret). That home was the FIRST Petoskey hospital of the Dr.s George and John Reycraft. Beside the Rowe home was/is Grand Avenue leading up on to the bluff, now with many homes. In the bottom left corner of the photo is the rock used to mark the Marquette Trail, with the plaque on the other side which was erected by THE PE-TO-SE-GA CHAPTER DAUGHTERS OF THE AMERICAN REVOLUTION PETOSKEY, MICHIGAN. More photos are below of the memorial rock and plaque. 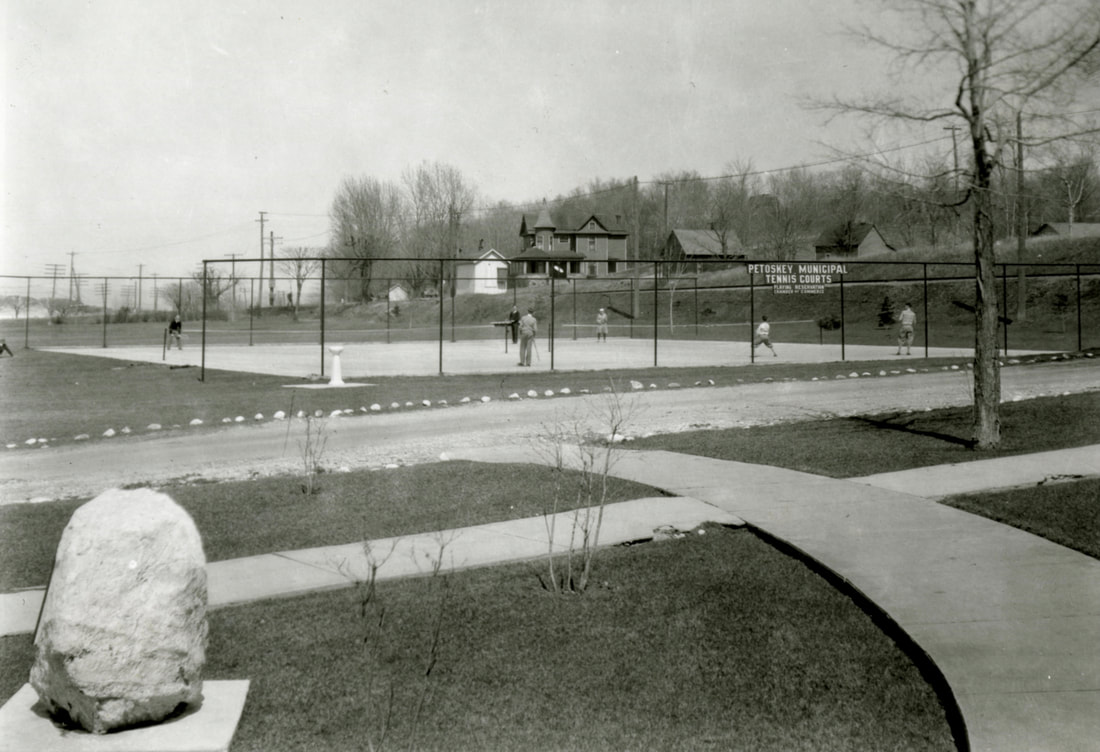 25 May 1912 ~ Petoskey Evening News
Article and Four Photos Below: The boulder at the grave of Old Chief Pe-to-se-ga (Ignatius Petoskey), the chapter name of the DAR in Petoskey, mentioned in the article below, is located at Greenwood Cemetery... not the Old Indian Trail boulder erected by the Petosega Chapter of the DAR, in the photos above located in Arlington Park. John Foley was a noted Petoskey photographer.

6 June 1912 Article Below: "Following the exercises at the monument another interesting part of the program was given when a large boulder, weighing nearly six tons, was dedicated by Pe-to-se-ga, Daughters of the American Revolution, at the grave of Ignatius Pe-to-se-ga, the Indian chief after whom the city of Petoskey is named." 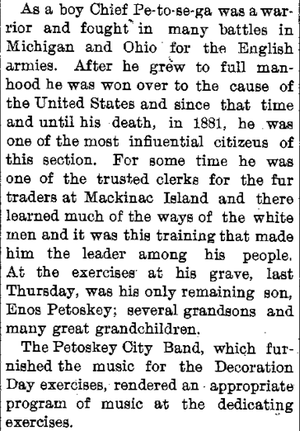 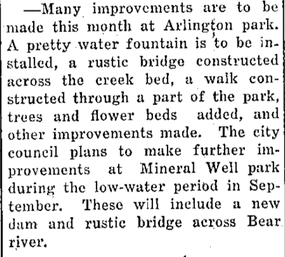 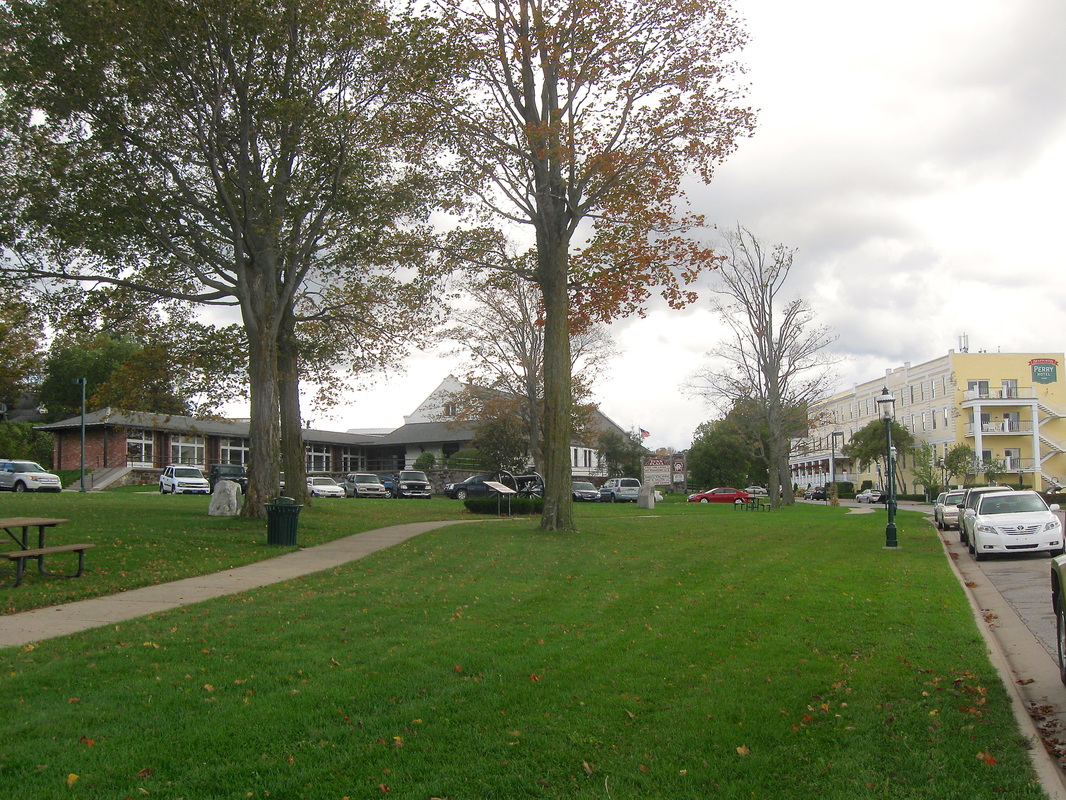 7 October 2013 ~ 1915 ~ The plaque on the boulder erected by THE PE-TO-SE-GA CHAPTER DAUGHTERS OF THE AMERICAN REVOLUTION PETOSKEY, MICHIGAN rests to the right of the Civil War Cannon in Arlington Park, closer to Stafford's Perry Hotel. 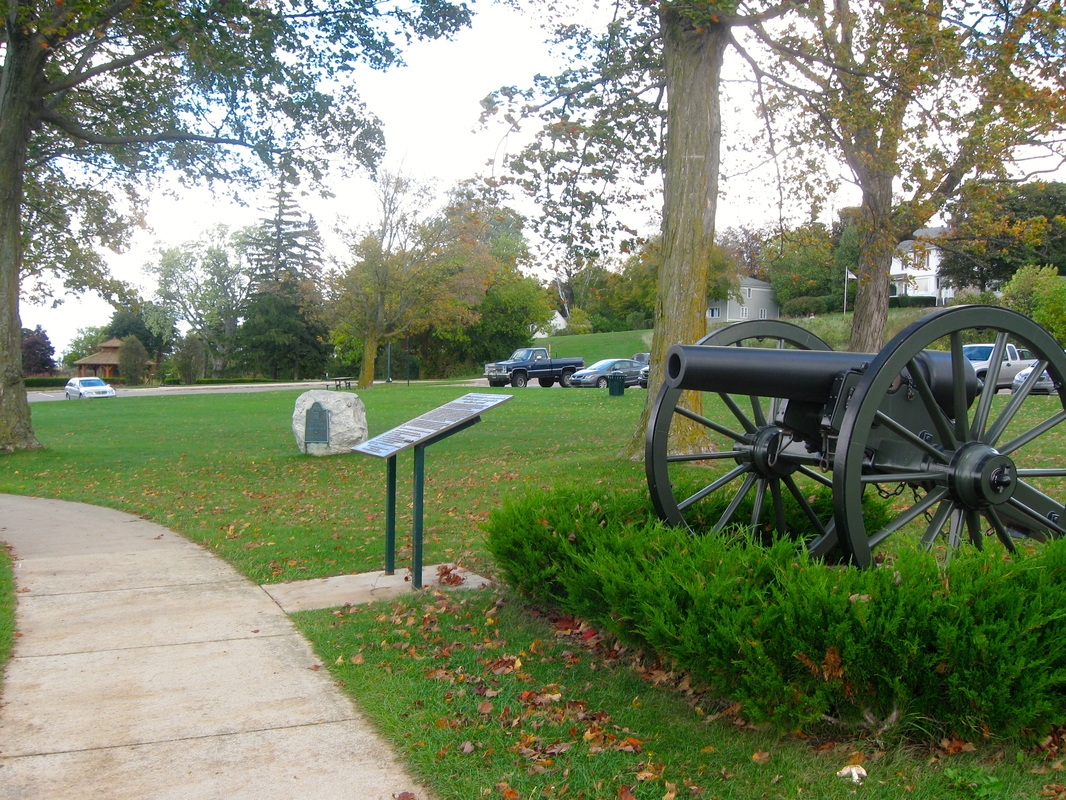 7 October 2013 ~ The Lombard Post No. 170 Memorial rests to the left of the Civil War Cannon in Arlington Park.

Is this the Lombard Post Memorial in the bottom left corner??
Contact the webmaster with your answer to the above question please. 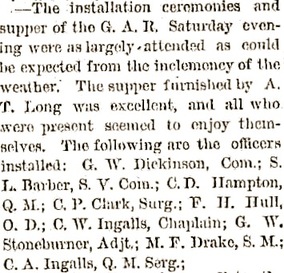 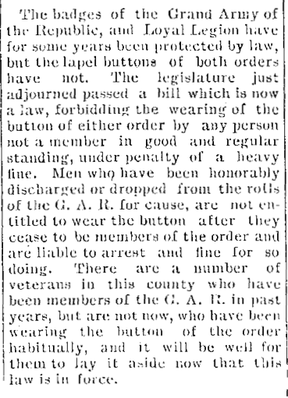 12 June 1901 ~ The Petoskey Record
Karla Howard Buckmaster took the photos of the Lombard Post No. 170 Memorial
Arlington Park Petoskey MI 5 November 2012
The Grand Army of the Republic, founded 6 April 1866, was an organization with members who served in the Union Army during the Civil War, for social and political purposes.  When the last member of the GAR died in 1956, the Grand Army of the Republic was disbanded. The Lombard Post No. 170 of Petoskey MI was a vital post of the GAR with a memorial placed in Arlington Park Petoskey MI to commemorate the GAR.

In 1881 The Grand Army of the Republic formed the Sons of Union Veterans of the United States of America [SUVCW] to go forward and represent the GAR. 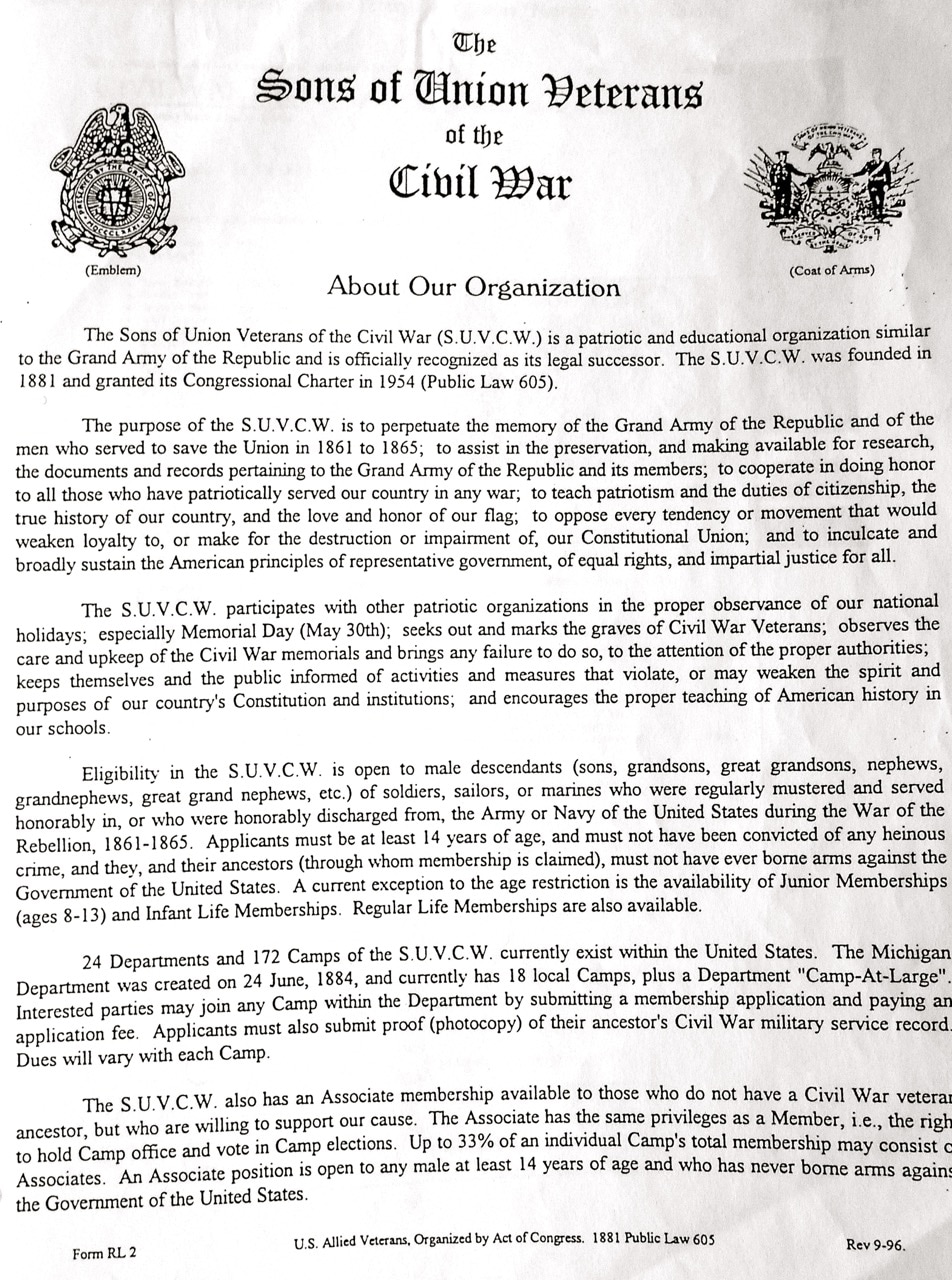 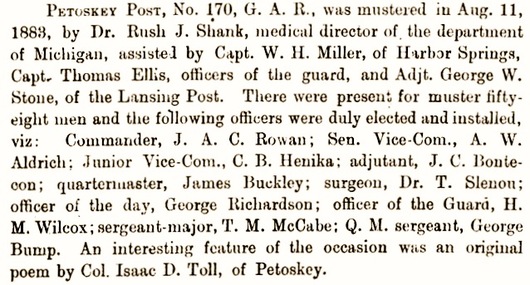 1884 ~ The Traverse Region
Col. Isaac D. Toll who was mentioned in the 1884 item above,
was later made the namesake of a section of Greenwood Cemetery Petoskey MI. 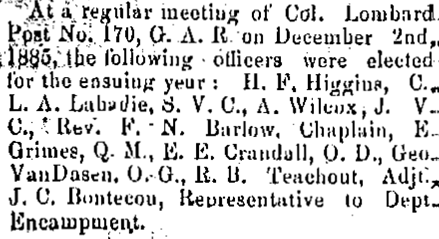 9 December 1885 ~ Petoskey City Record
Article Below: J.B. Ellsworth was a member of the G.A.R. Post which was to attend his funeral. 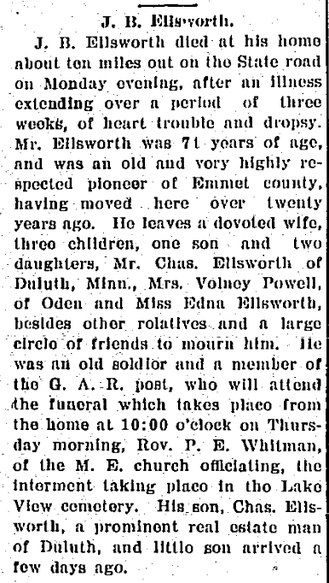 Brief History of The Grand Army of the Republic

Sons of Union Veterans of the United States of America [SUVCW]
The Robert Finch Camp NO. 14 SUVCW website describes how their camp requested the City of Petoskey to move the 1927 G.A.R. bronze plaque on a stone to a spot near the cannon their camp had funded to be restored... before the dedication on 21 June 2008. 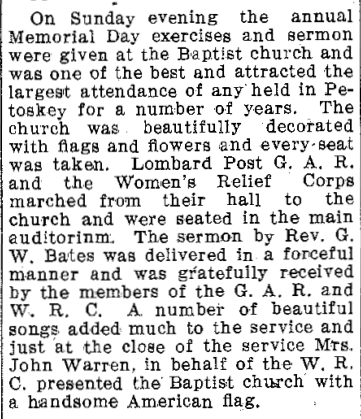 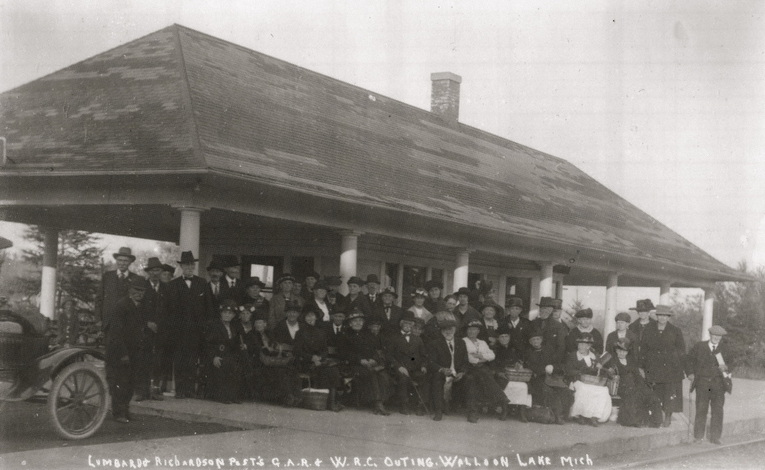 Newspaper Picture Submitted By Eddie May
Accompanying text stated: "Members of the Grand Old Army Lambard [sic~Lombard] and Richardson Post enjoyed an outing on Walloon Lake about 1914-15. The building was the new railroad depot which was located near Clarion just past the intersection of the Junction of US 131 and M-75 to the right of corner by railroad tracks."

1917 ~ Nelson Bennett a member of Lombard Post, No. 170
and was with Custer's brigade, Co. A, Seventh Mchigan cavalry.
The two photo copies below, the entire photo and a close-up, are of the same photo. The photo was shared by a friend who owns the precious original photo which is quite large. These photos cannot be enlarged, at the request of the owner. The memorial plaque and huge rock are no longer positioned on a platform as in the photo, although from the background in the photo, it appears that the rock/plaque memorial has always rested in Arlington Park. The date on the plaque above is 1927, so the photo below would have been taken after 1927.

The owner of this photo does not have a listing of the people in the photo so if anyone can help with identities of people, please e-mail me:
HowardBushTree@Chartermi.net
Names of some of the GAR Members in the photos above and below: Edwin A. Dunton, V.A. Baker, F.J. Smith, Allen J. Ramsby, Silas Wright, Melvin Burch, and S.S. Puckett. 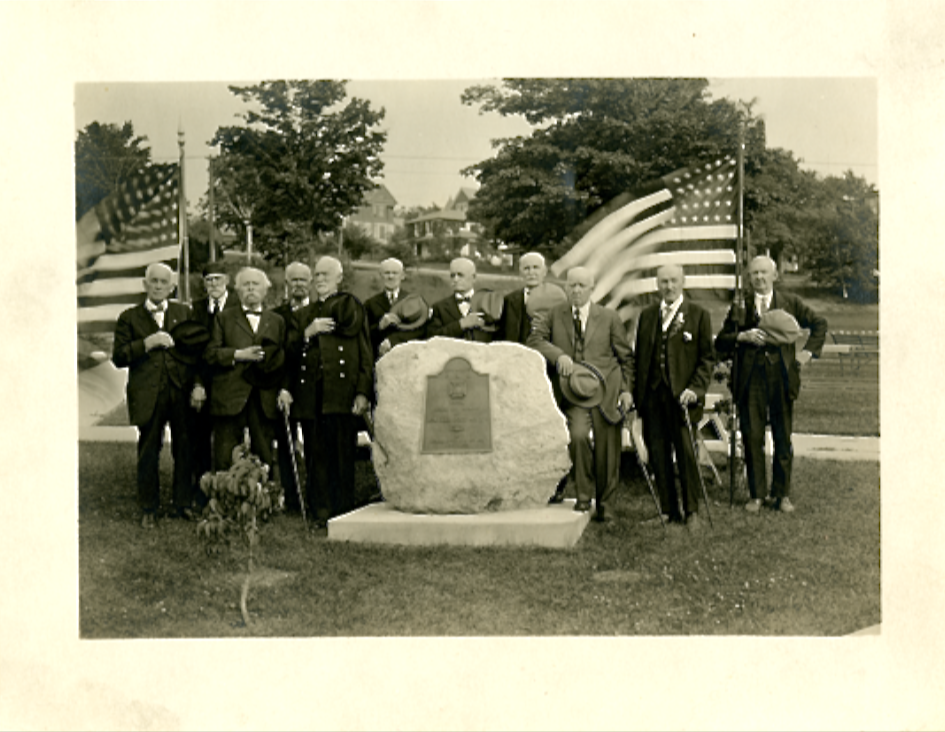 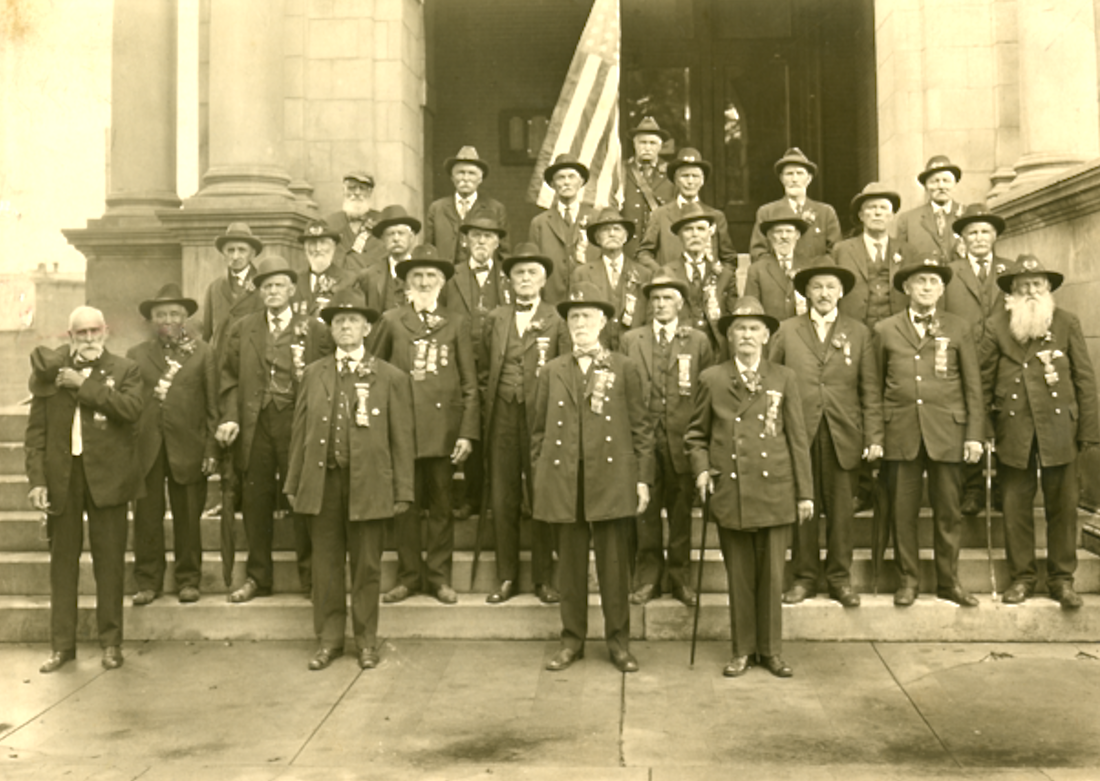 Memorial Day 1921 ~ GAR on the Steps of the Emmet County Court House Petoskey MI
The photo above was taken by John Foley. The following information of possible identifications seems likely because of the description from the GAR-Photographs website... but this is not positive.
Title: GAR - Photographs
Descriptive info: G.. A.. R.. Lombard Post 170, Petoskey, Michigan.. Lombard Post 170, Grand Army of the Republic. Photograph taken by John Foley in front of court house at Petoskey, Michigan, Memorial Day 1921, Information from Fred L.. Knoodle, Robert Finch Camp 14, SUVCW, Traverse City Michigan.

See another photo (1913) of the Lombard Post 170
Posing by the Cannon in Pennsylvania Park on this website. 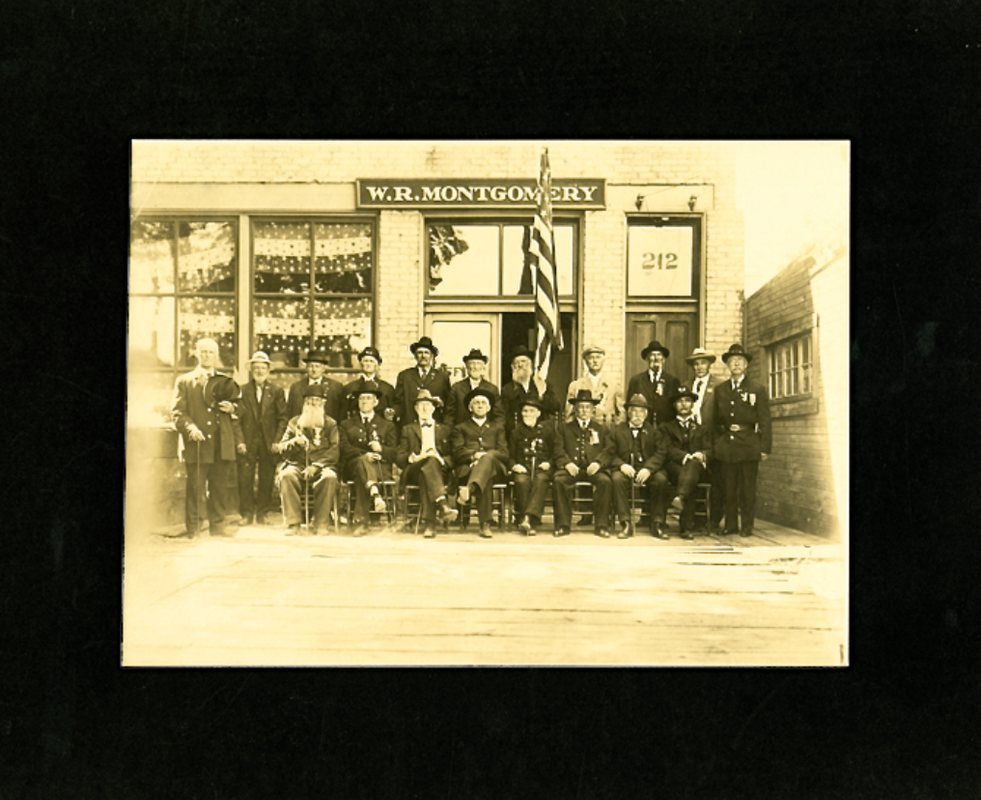 Photos Below: Theodore A. Penland was the
LAST Commander In-Chief of the Grand Army of the Republic
~ 1948-1949 ~
The 12 September 1949 Life magazine showed a photo on page 53 of Theodore Penland, one lone member, watching a concert given by the US Marine Band during the encampment for the G.A.R.. The small article stated: "Eighty-three years ago 188 young men gathered in Indianapolis, Ind. to hold the first encampment of the Grand Army of the Republic and set about organizing the 1,890,000 union veterans of the Civil War. Last week the G.A.R. was back in Indianapolis. This time there were six members, representing 17 living members. Some were nearly blind or deaf. Only one could walk more than a few steps. They were trundled about like precious China figurines. Finally the six men voted to make this the last encampment and a motorcade carried them slowly through the city to the tune of 'Mine eyes have seen the glory...."

The 20 August 1956 Life magazine had a wonderful article (with many photos) on page 19 written by Petoskey's own Pulitzer-Prize author Bruce Catton titled "Muffled Roll for Grand Army ~ The Death of the Last Union Soldier and of an Era". 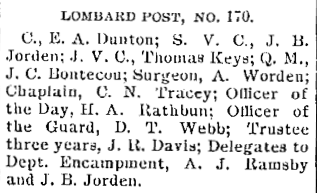 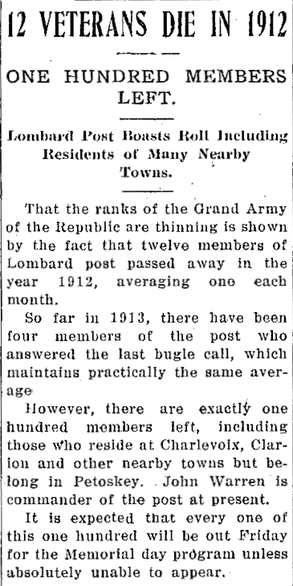 Journal of the Annual Encampment 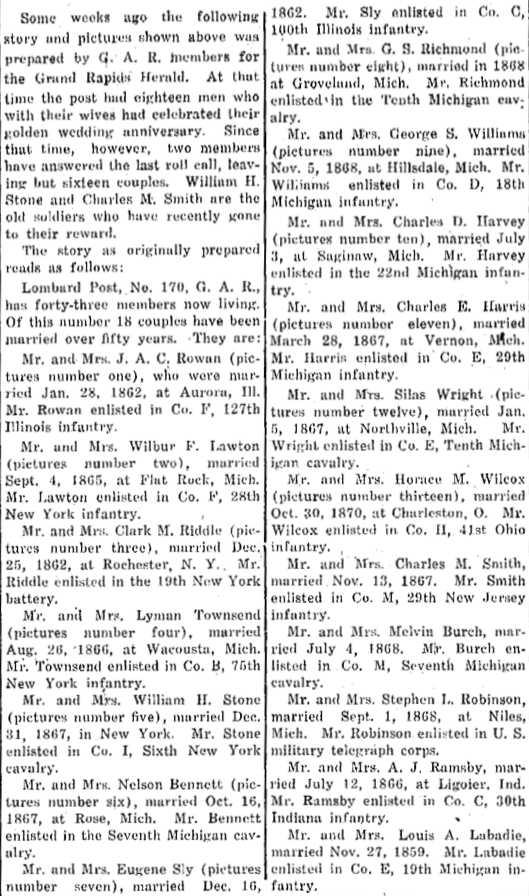 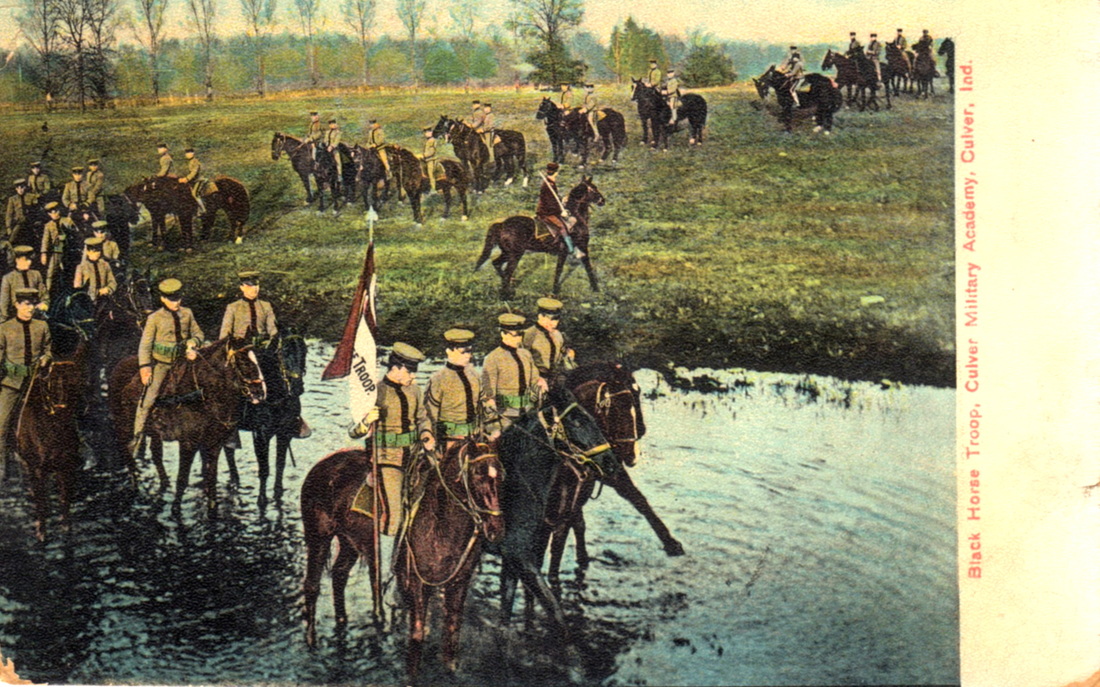 Black Horse Troop, Culver Military Academy, Culver, Ind.
Bible presented to the Lombard Post 170 in Petoskey Michigan
~ January of 1915 ~
In 2015, Joseph "Joe" Murphy discovered the old Bible (in the photos below) among the effects of his grandfather and namesake, Joseph Murphy who passed away in 1942. Joe's ancestors had fought in the American Revolution for the Irish Brigade of the French Army and decided to stay in Michigan after the Revolution. Joe's father was John T. Murphy, the Probate and Juvenile Judge for Emmet County as was his father before him. Joe believes that at some point the Bible came into the possession of his grandfather. Upon research about the name of Mrs. (Anna) Derk DeRuiter on the dedication page of the Bible, it has been learned that her husband Derk had passed away in 1913 at only 68 years old from Addison's Disease. Anna's 1933 obituary told that she had "for many years been a member of Lombard Relief Corps of Petoskey. Her husband was a Civil war veteran." He enlisted in the Union army at the beginning of the Civil war, when he was only seventeen years of age, and continued to serve throughout the struggle.

The Petoskey Record of 6 June 1906 printed a portion of an address given by Derk DeRuiter on Memorial Day. The Speech can be accessed through the Greenwood Cemetery "Newspaper Research" section of the cemetery's website.

Derk DeRuiter had served the city of Petoskey in 1908 as the mayor, and had already served as an alderman from the second ward. It is interesting to note that this precious keepsake of the Lombard Post is still in existence in Petoskey Michigan. 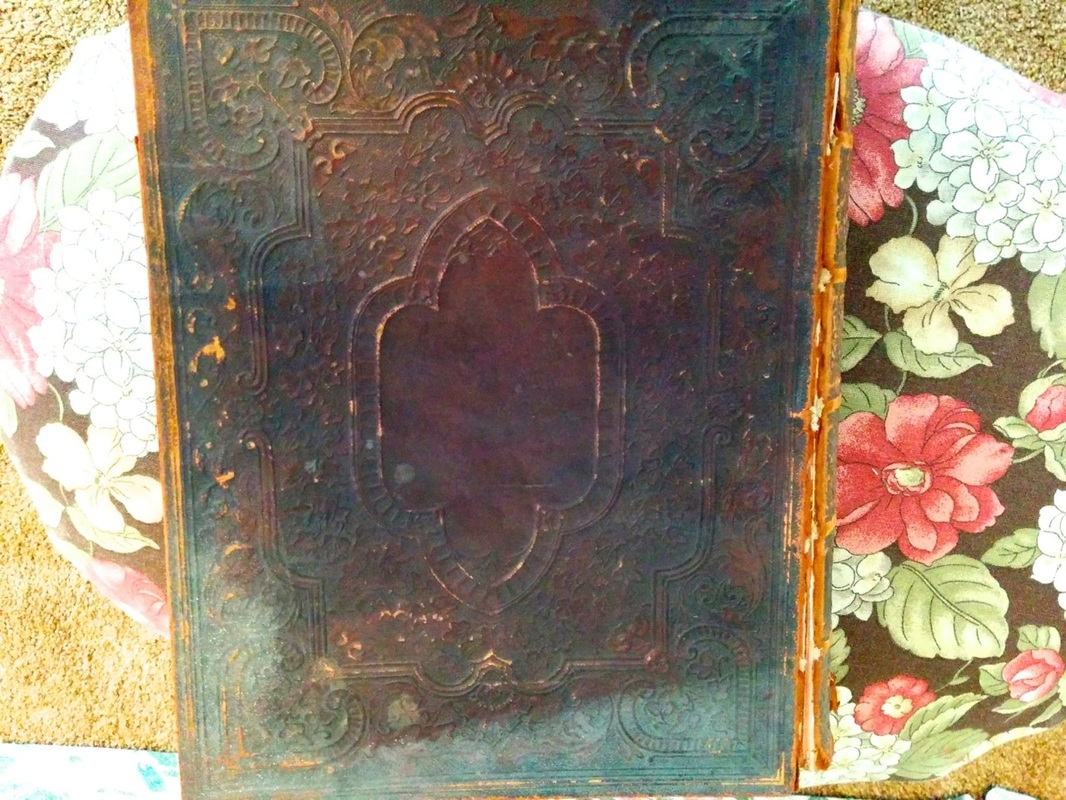 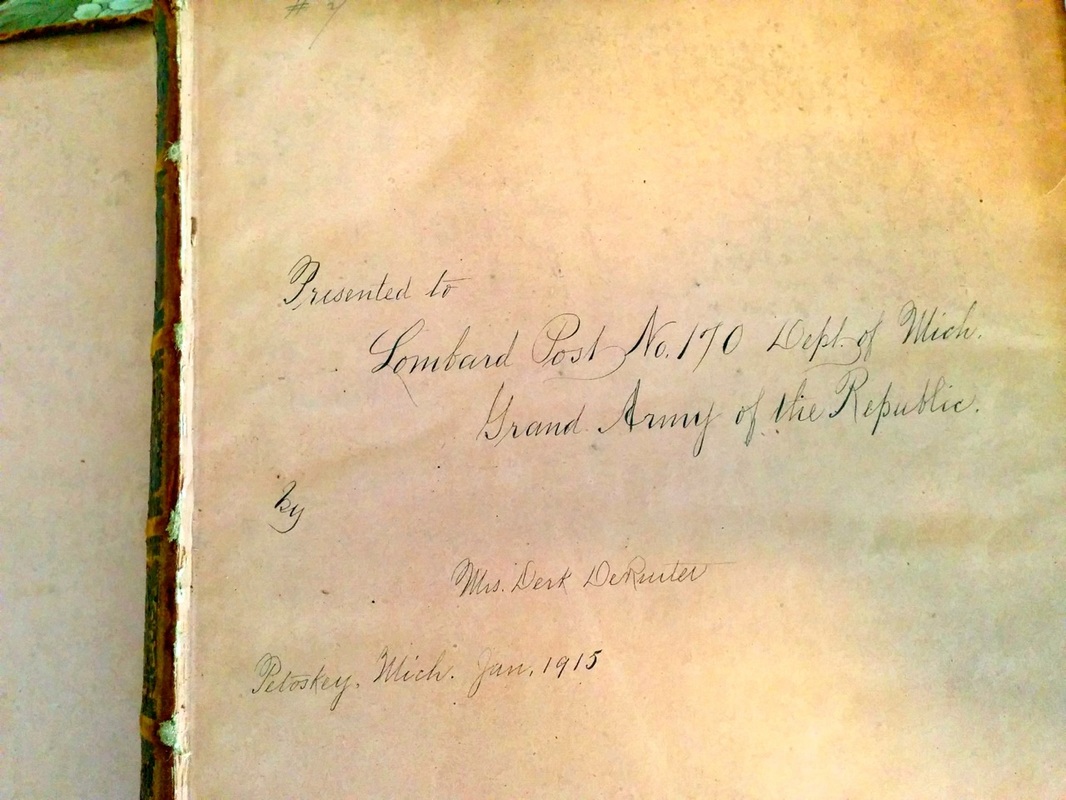 23 February 1933 ~ Petoskey Evening News
Lombard Post No. 170 G.A.R. Petoskey Michigan
(Photos Below Taken 3 November 2015)
Louis Watson "Bucky" Hankey has in his possession the ribbon of the Lombard Post No. 170
which had belonged to his great-grandfather Christopher Hankey
who had served in the Civil War, having fought in thirteen significant battles. 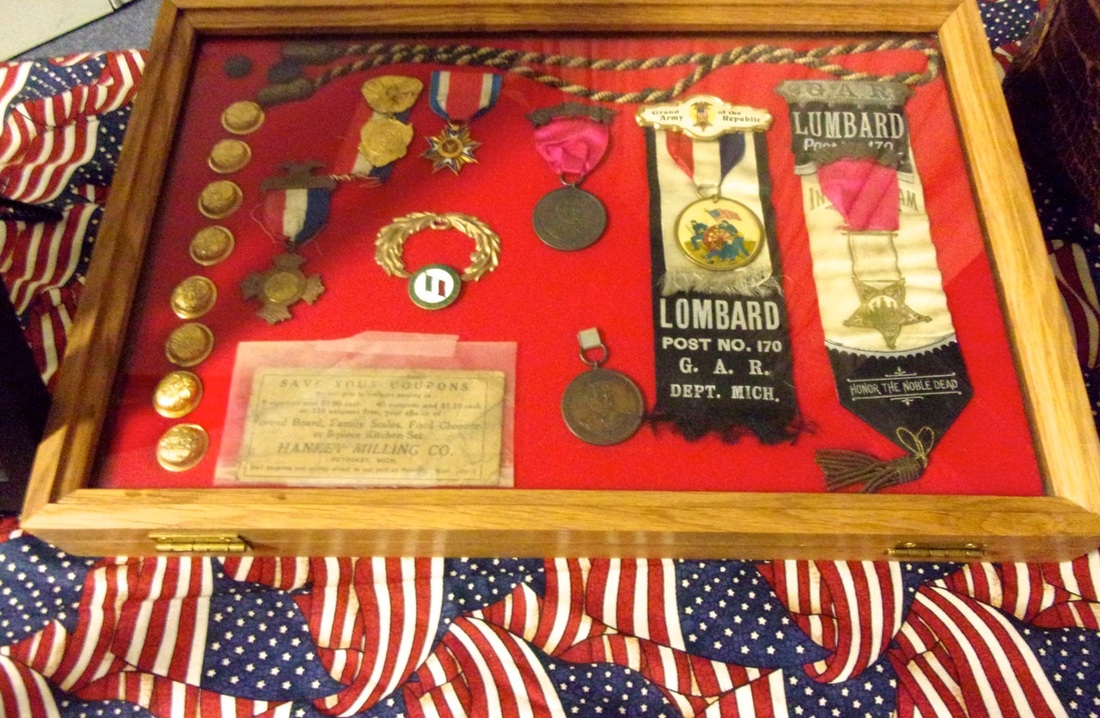