As of 22 December 2014 Greenwood Cemetery site stated 1414 veterans are buried there. 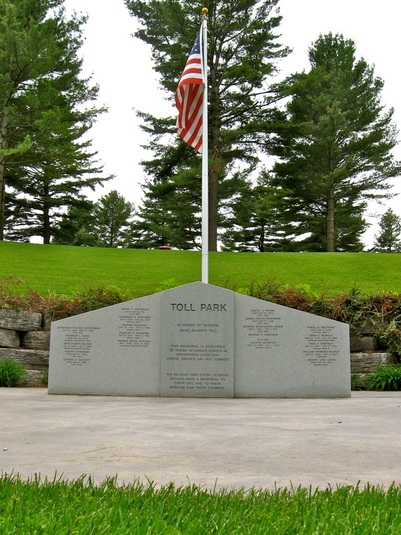 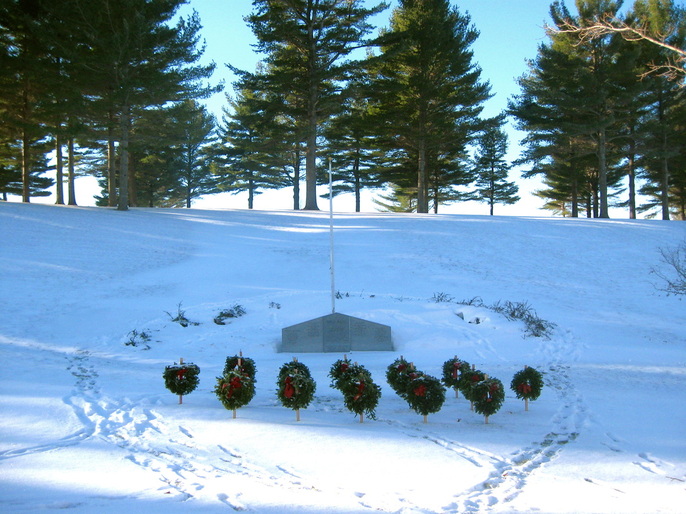 20 December 2014
TOLL PARK
Toll Park is designated for veterans of WWII who were killed overseas, and their bodies were not returned to the United States... and to veterans buried in Greenwod Cemetery whose graves are not marked.
~~~~~~~~~~~~~~~~~~~~~~~~~~ 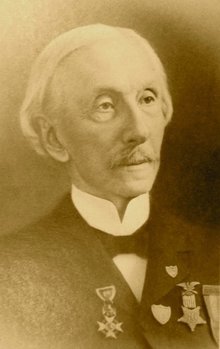 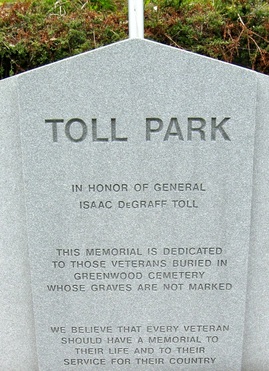 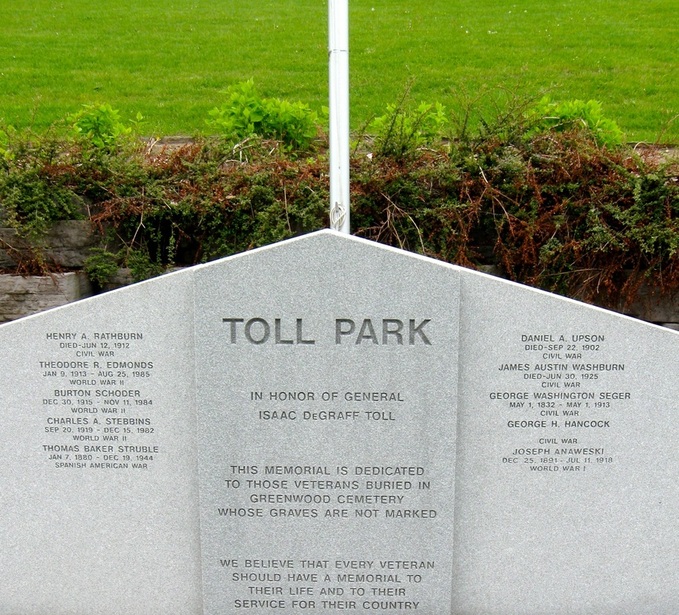 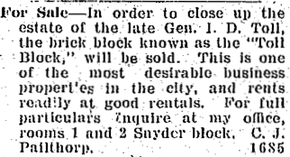 30 July 1910 ~ Petoskey Evening News
Col. I.D. Toll purchased the FIRST ticket sold in Petoksey for the C.&W.M. railroad.
The railroad station was just being constructed in 1892.
In 2017 the same building is used as the Petoskey Historical Museum.
The 1893 article below recalled when the National Rifles of 1861
were called to protect the capitol, including Colonel Isaac D. Toll of Petoskey, MIchigan. 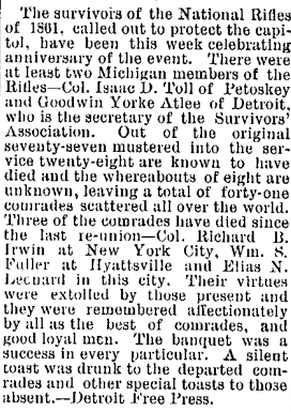 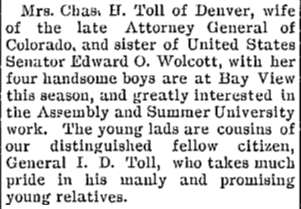 This Soldier's Monument,
the subject of the 25 December 1889 The Petoskey Record article below,
was never constructed, but sounded as if it would have been an impressive structure. 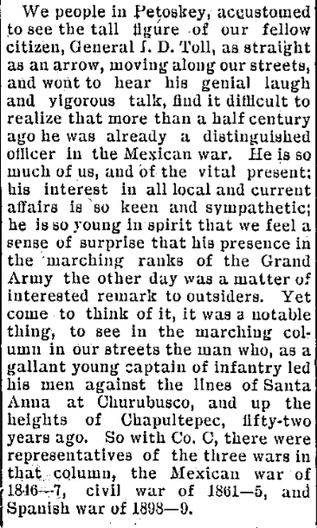 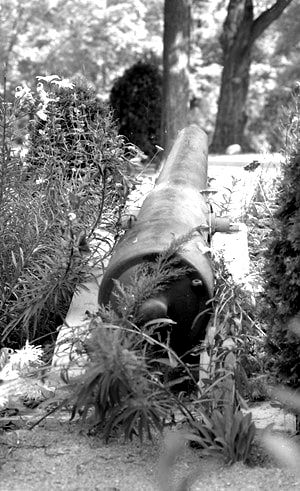 Greenwood Photo Archive Collection from Petoskey Newspaper (The Graphic ~ 27 August 1992)
Cannon Park honors the veterans of the Civil War. The Greenwood Cemetery site tells: "The United States Government gave the cannon to the Lombard Post #170 of the G.A.R. (Grand Army of the Republic) on November 10, 1897 and the Lombard Post in turn donated it to the Cemetery.  The cannon is a 30-pounder Parrott Rifle.  These cannons were donated across the country to serve as 'silent sentinals' in tribute to the memory of all who served and sacrificed during the American Civil War." 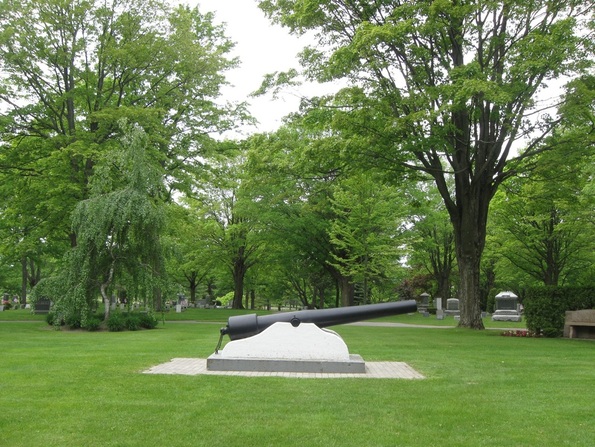 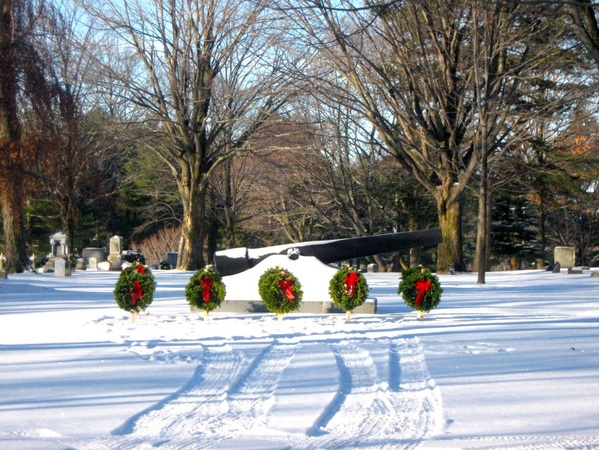 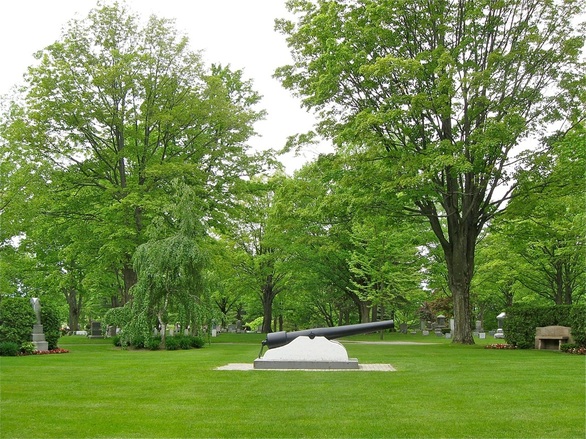 If someone were to design a tour of Petoskey's Civil War cannons, after seeing the Dahlgren in Pennsylvania Park and the Napoleon in the county building, an ideal place to complete the tour would be in hilly Greenwood Cemetery above Petoskey.
In the center of a beautifully landscaped garden is another Civil War cannon - the 30 pound Parrott Rifle cast in 1862 and weighing 4,200 pounds.
These large Parrotts were cast of iron and were not always strong enough to withstand the pressures of firing. The Parrott was fired with some risk of the gun exploding or 'letting go.'
Now it is surrounded by abundant flowers on a raised garden. Nearby is a tall, graceful marble cenotaph which is engraved 'Sacred to the memory of our fallen heroes 1861-1865.'
In the surrounding cemetery are many graves of men who served in the Civil War, some marked with metal stars bearing the letters 'GAR' for Grand Army of the Republic and dated 1861-1865. One small marble stone nearby reads '4th Mich. Cav.' 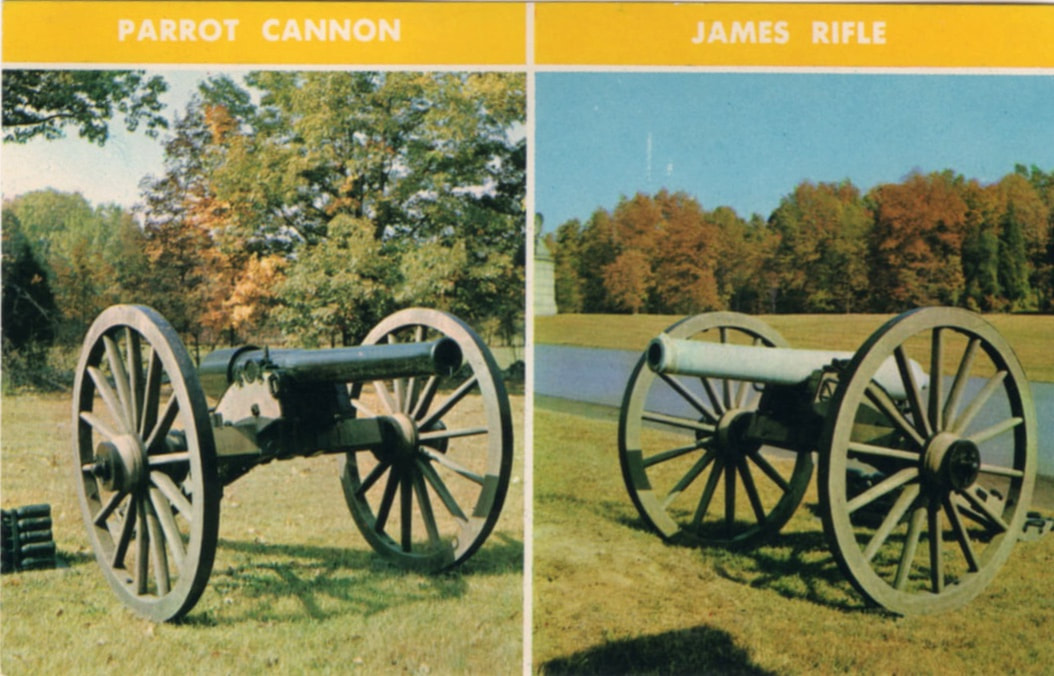 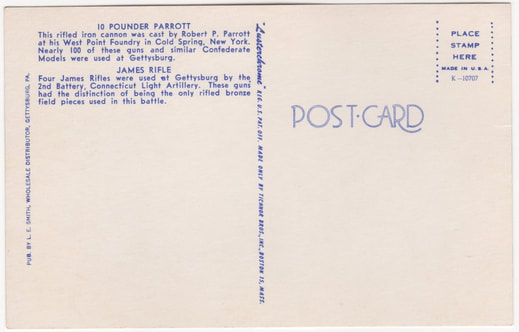 Back of scanned postcard in personal collection above...

The memorial in the photo below, dedicated in 1889, sitting to the left of the above cannon, is engraved:
SACRED
TO THE
MEMORY OF
OUR FALLEN
HEROES
1861 - 1865. 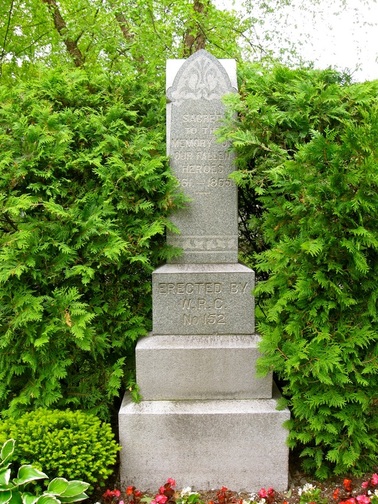 8 June 2013
The memorial in the photo above was erected by the W.R.C. (Women's Relief Corps) No. 152.
The W.R.C. is an auxiliary to the Grand Army of the Republic, Inc.
The Petoskey Record's 5 June 1889 article below stated: "First in order came the unveiling of a handsome monument dedicated to 'The Unknown Dead,' by the Women's Relief Corps. Capt Bradley Lawton and Lieut. Amos Henika of the Sons of Veterans removed the veil, and Mrs. L.M. Rowan made a most appropriate and feeling dedicatory address, Chaplain Litchfield responding for the Post. The oration by a comrade of the Post: the impressive service for the dead according to the ritual of the Grand Army, Commander Gilman Whitten, Officer of the day J.B. Gage and Chaplain A.C. Litchfield participating; the firing of a soldier's salute by a squad of eight men from Litchfield Camp S. of  V. and the decorating of graves with flowers followed in due order, after which the procession re-formed and the great crowds melted away."
5 June 1889 ~ The Petoskey Record

Told of the  impressive orations which were delivered
the day of the dedication of the memorial
To the Memory of Our Fallen Heroes. 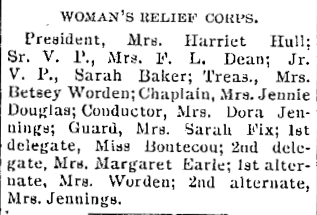 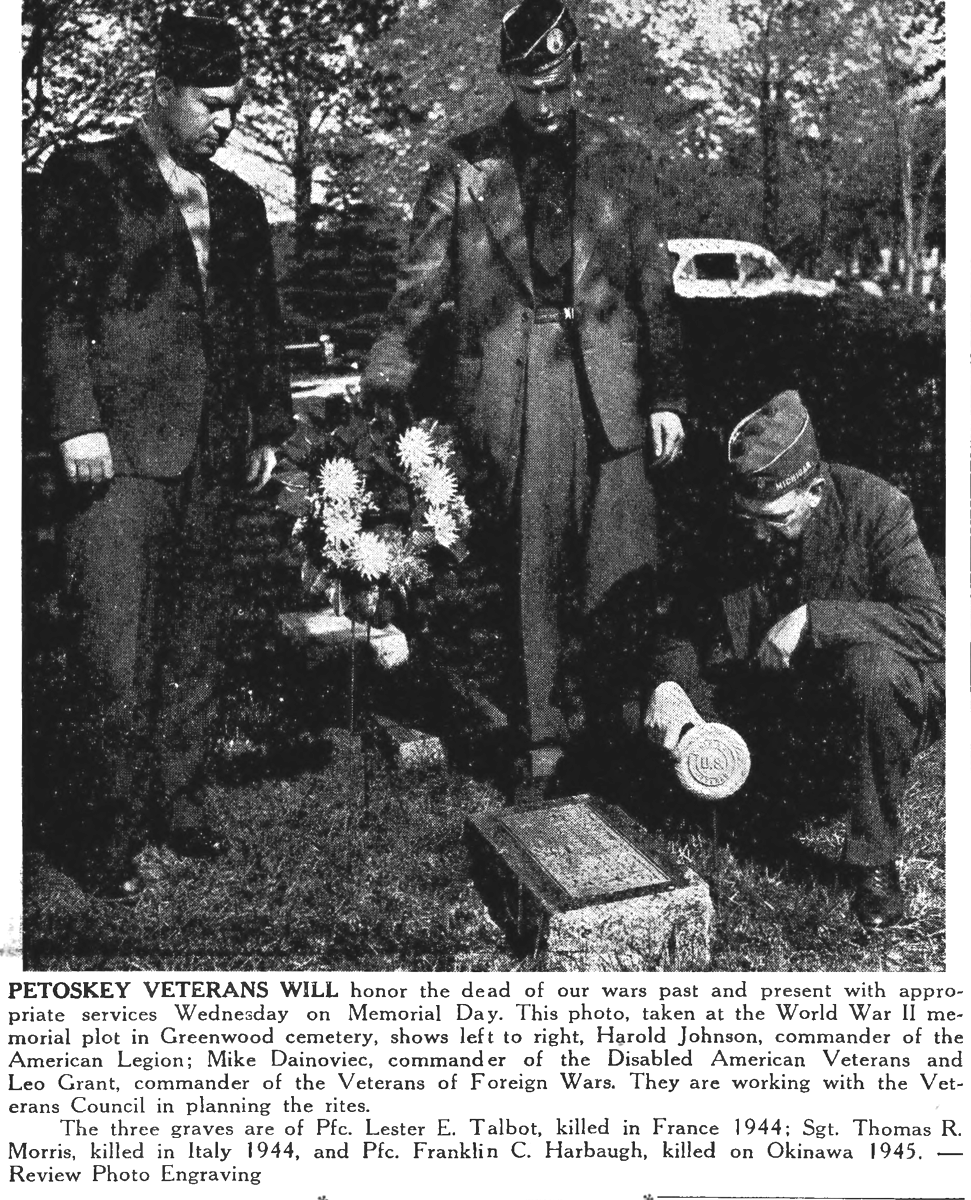 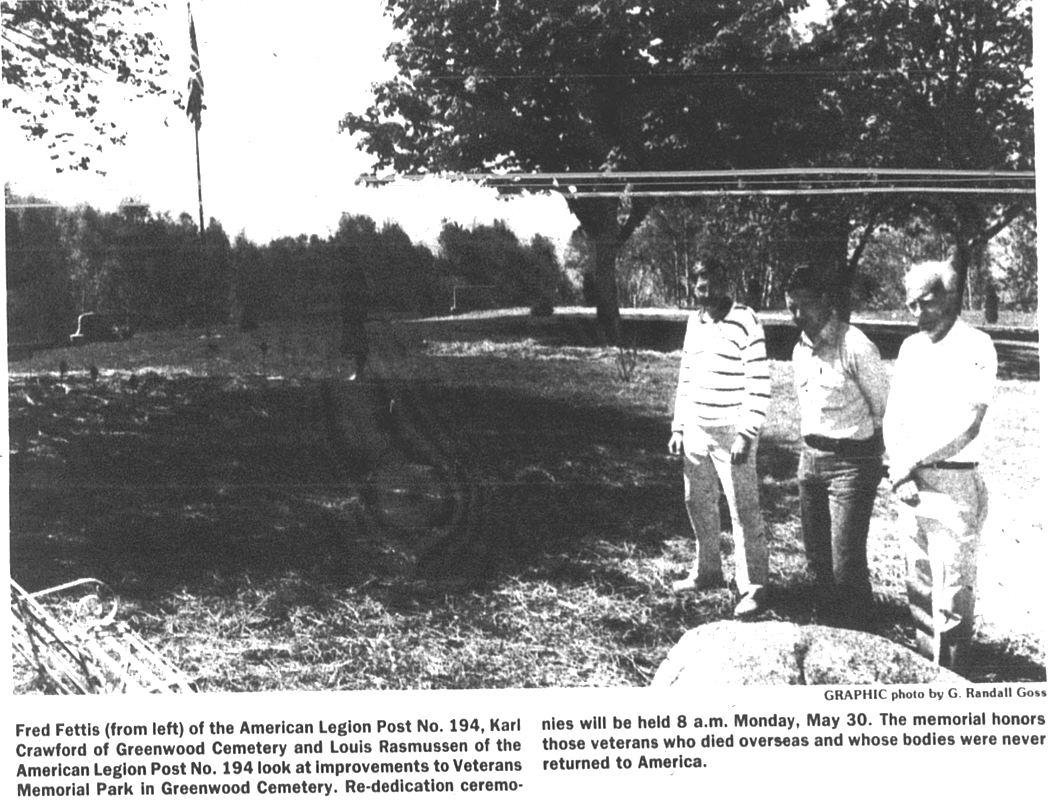 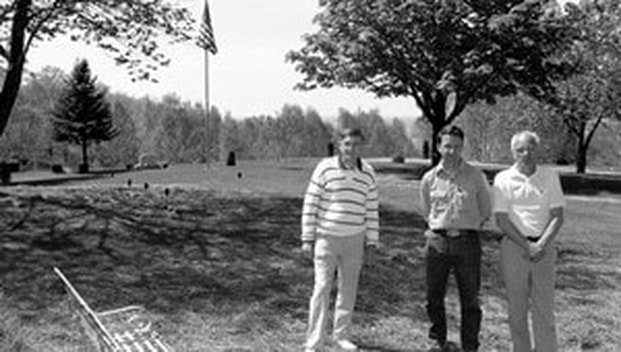 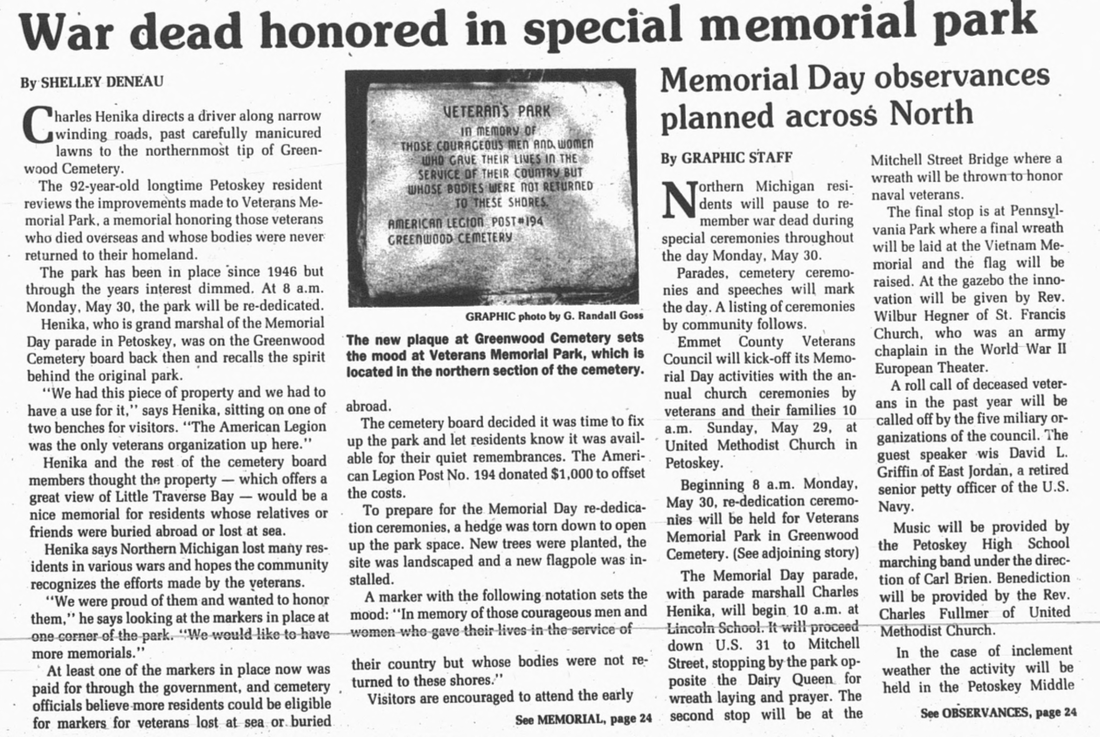 26 May 1988 ~ Emmet County Graphic (two articles above are continued below)
The Greenwood Cemetery website tells the breakdown of veterans (by war)
who are buried in the cemetery.
Greenwood Cemetery