Please do not copy the photos on this site, many of which have been submitted by private individuals...
just come back and visit the site often to view the photos.
"Clicking" on some color highlighted words may access additional information.
Most posted items will enlarge by "clicking" on them.
Obituary Below: James Gibson died in 1884 and was buried in the Charlevoix County, Clarion, Michigan, Cemetery. James was born in Ireland in 1790, and enlisted in the "Royal Scots" in 1807 when it was commanded by the Duke of Kent, Queen Vistoria's father. James served through the Peninsular campaign, and was wounded the very last day of the Battle of Waterloo, a faithful soldier. He said the Regiment never fired a gun without him. James came to America in 1832 and had lived with his granddaughter Mrs. A.A. Foot at Clarion since 1882. 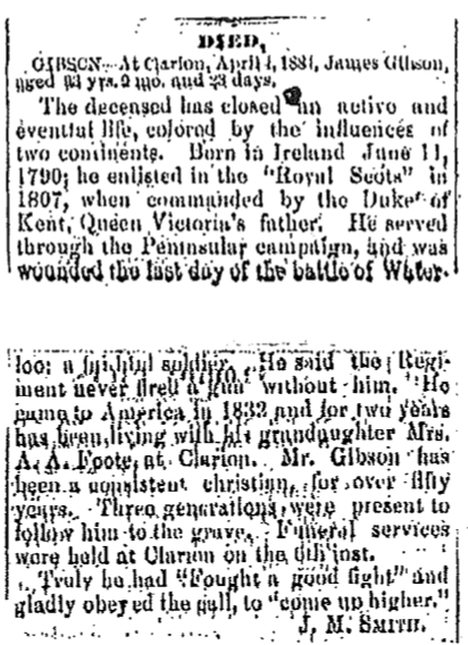 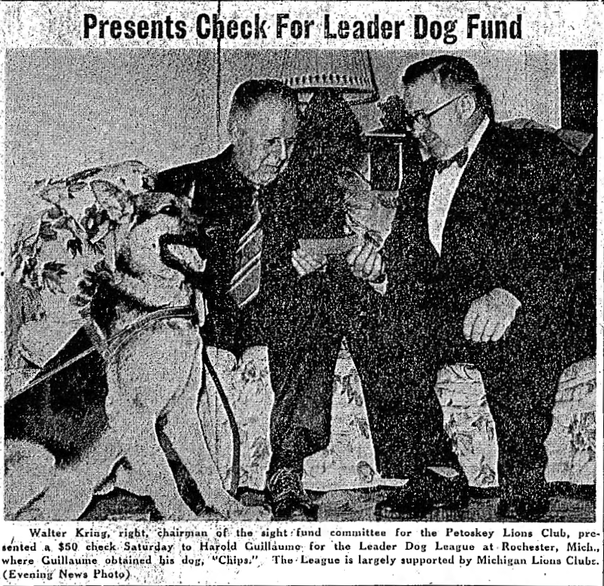 7 April 1952 ~ Petoskey Evening News
Obituary Below: Very impressive that Harold Guillaume was noted as
"the FIRST married man in Emmet County to enlist during World War I.
He served with the United States Army Air Corps." 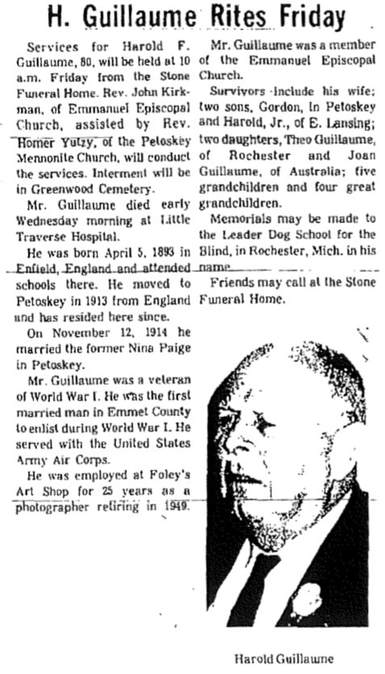 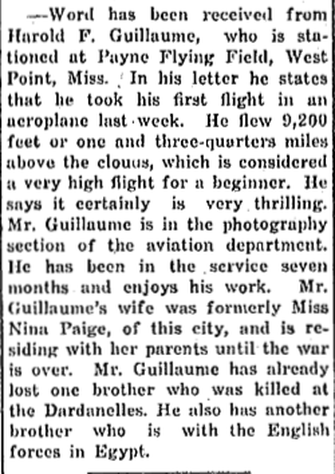 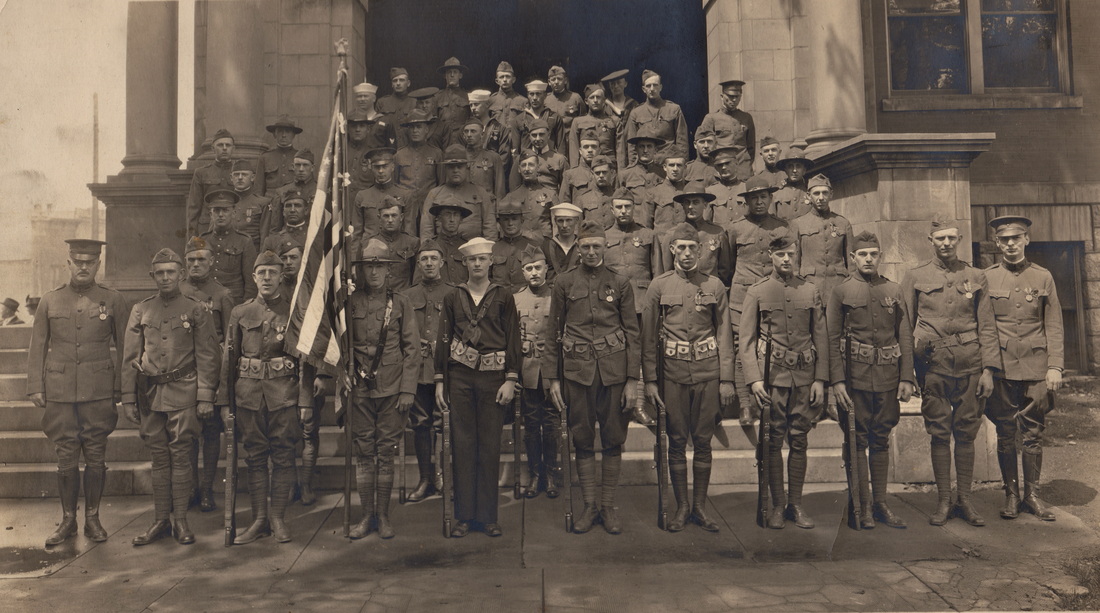 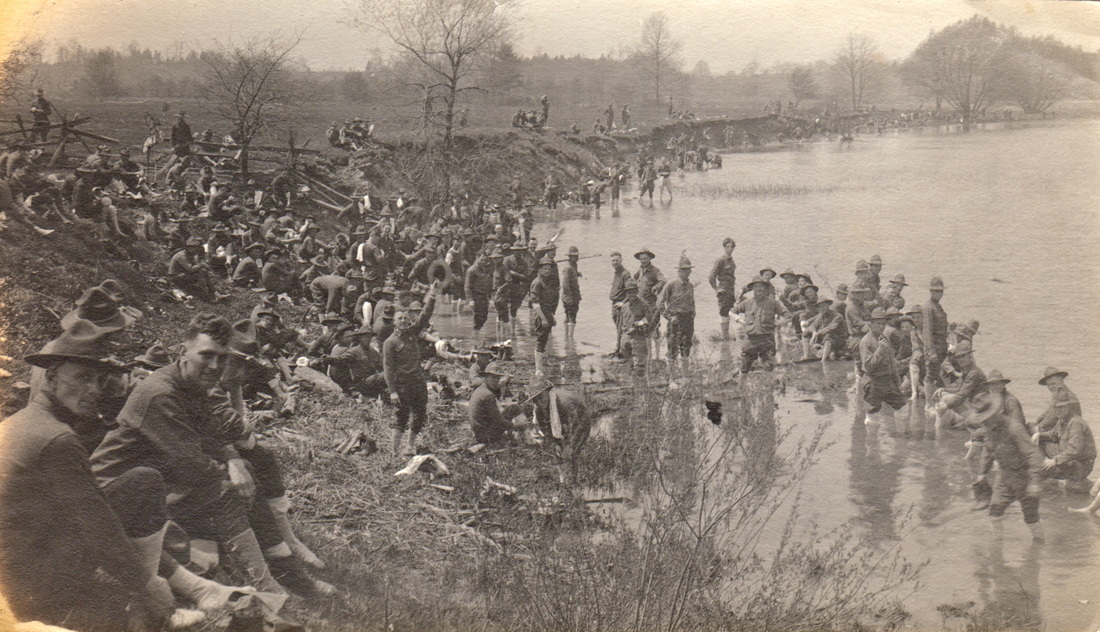 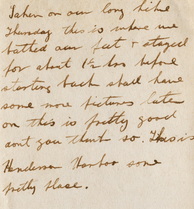 Photo at left is of the back of the above photo of the military men sitting near a water site... Henderson Harbor as mentioned in the text at left as follows: "Taken on our long hike Thursday this is where we bathed our feet & stayed for about 1 1/2 hrs before starting back shall have some more pictures later on this is pretty good don't you think so. This is Henderson Harbor some pretty place."


Handwritten on the back of the photo below which appears to have been taken in the same area as the photo above: "Taken last week can you pick me out it started to rain like the dickens after this picture was taken this is about 3 miles out from Post" 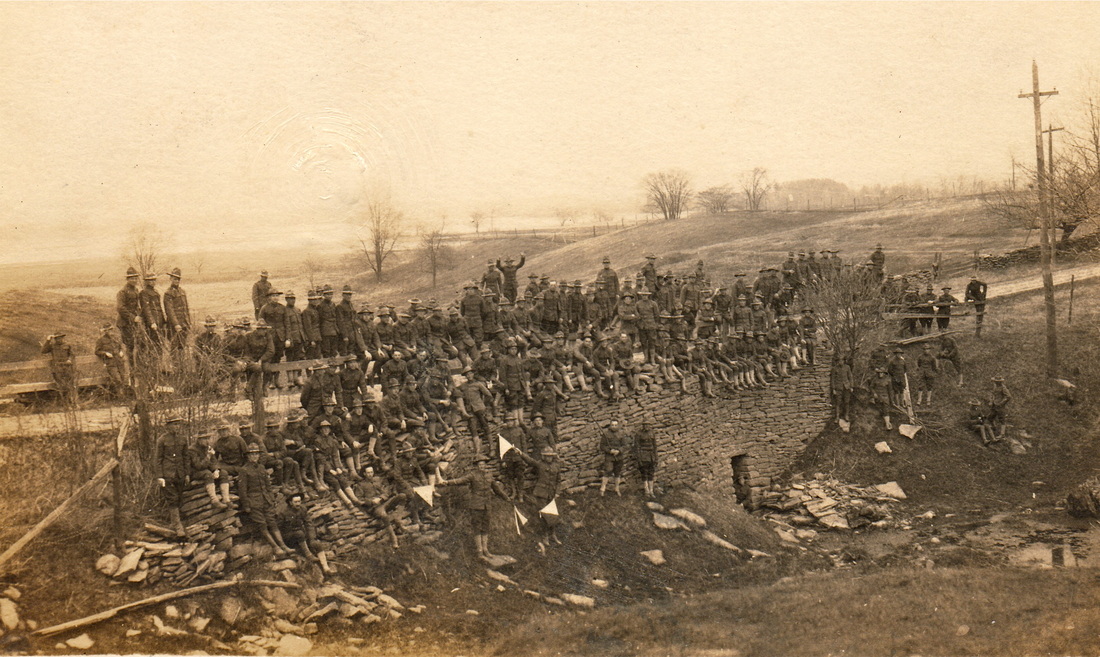 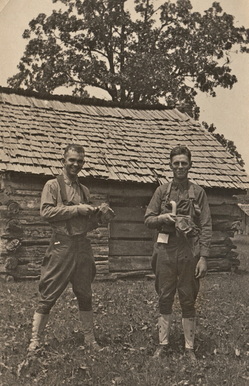 Both men appear to be holding a mask... 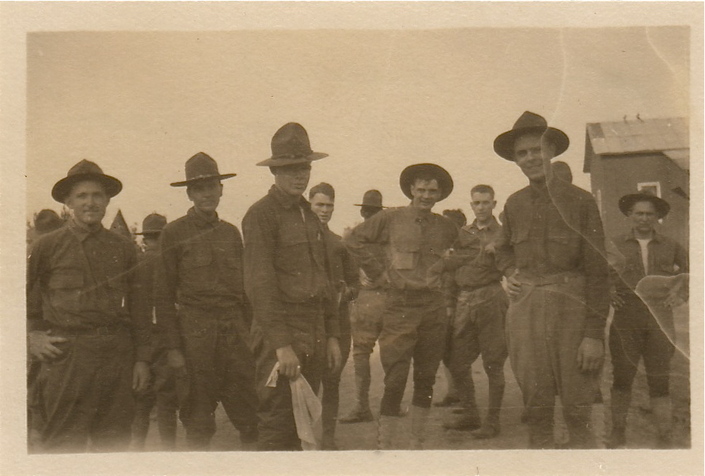 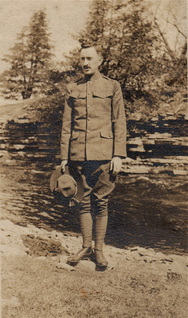 This gentleman looks to be the same as in the photo below right, sitting on the far right... and the Kitchen Police photo farther below he appears to be sitting on the far right again. Harold Guillaume is sitting on the center of the cannon in each of the two photos below.
Handwritten on the back of the photo below: "Our squad on K [Kitchen] Police all there except yours truly & I had to take it. The 2 standing up are the cooks. Left to right La Cour   J Noel   Ray Moore   J Projaske   R Poulsen    George Night
Middle our acting Corporal Le Roy Nelson  some picture" 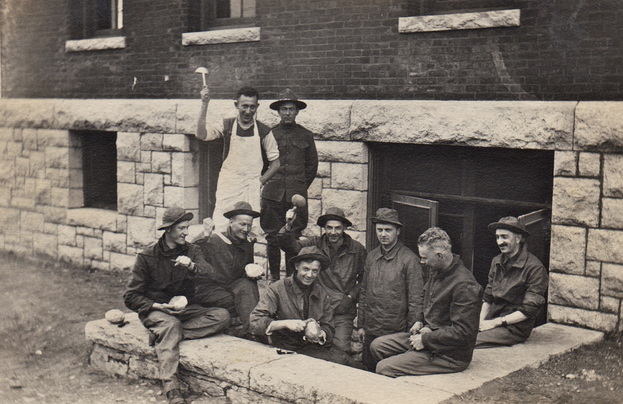 Two photos above are of some sort of military events which have drawn observers... 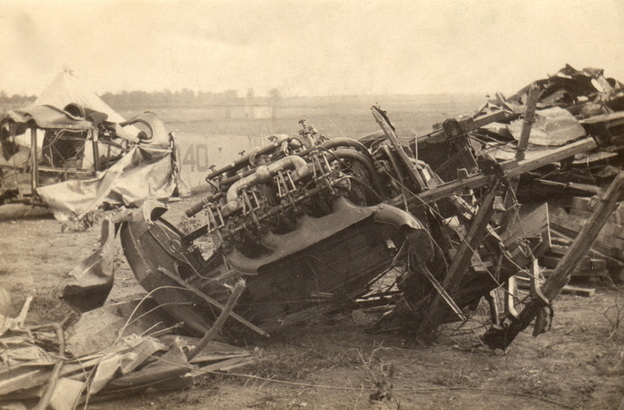 Written on back: "WWI German" 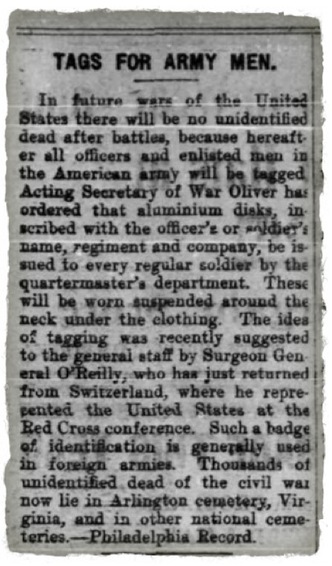 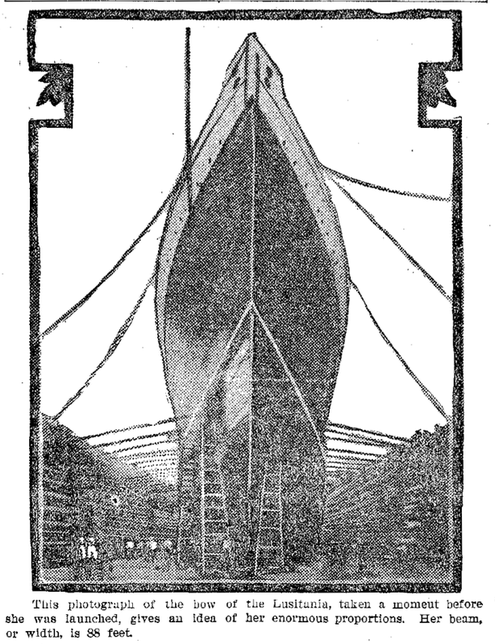 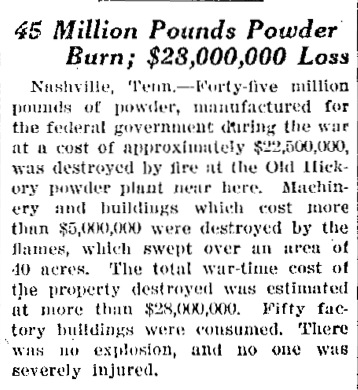 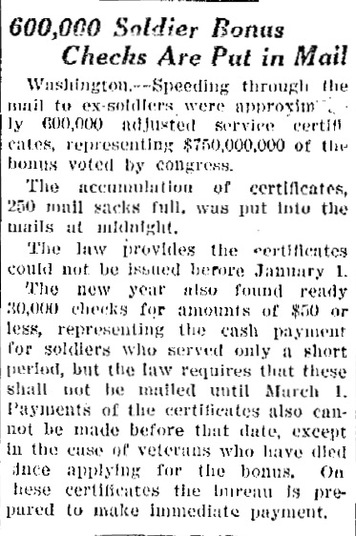 8 January 1925 ~ The Levering Local newspaper
The three photo postcards below have no writings or clues of the locations where the photos were taken.
Does anyone recognize the locations, or any of the WWI soldiers? 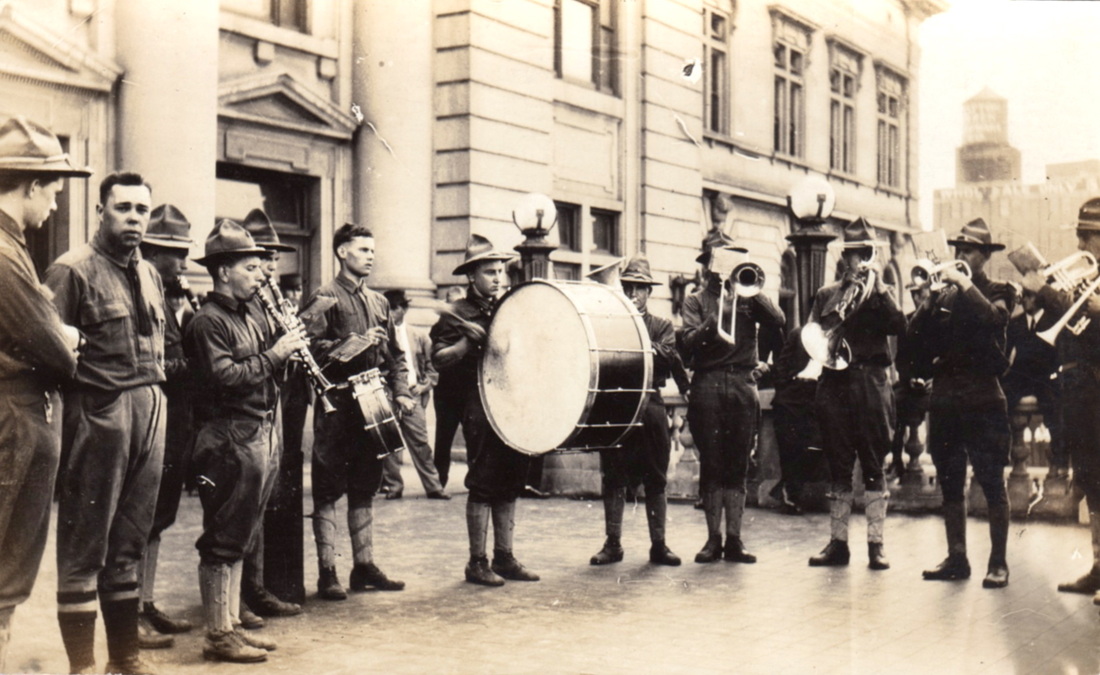 Two 1916 articles below: J. Will Callahan, a Bay View summer resident of Petoskey, wrote a new song, "The Story of Old Glory, the Flag We Love." The song is "intensely patriotic."
~ Talk of WWI Monument for FIRST American Killed in the World War ~ 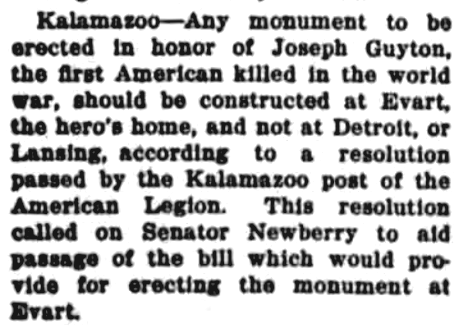 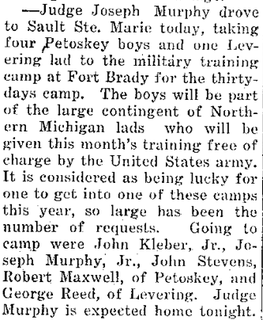 5 July 1932 ~ Petoskey Evening News
George M. Cohan wrote the best war song...
​"Over There" about WWI...
the marching song of a million Yanks.