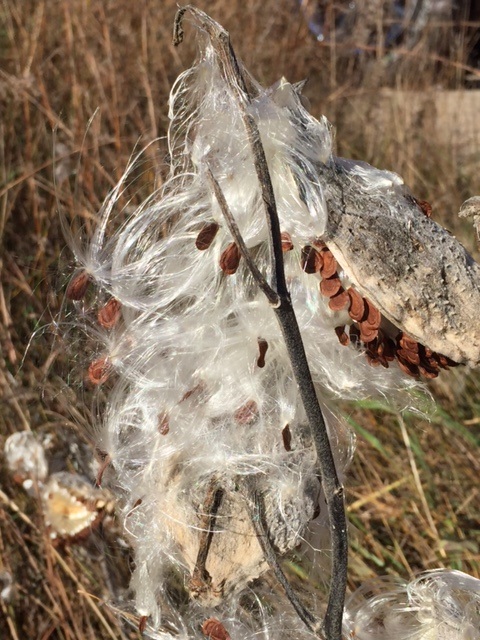 November 2016 ~ Kelly Buckmaster submitted this milkweed photo with permission for this photo to be posted only on this webpage.
Ralph Waldo Emerson wrote:
"What is a weed? A plant whose virtues have not been discovered."

12 July 1928 ~ Otsego County Herald and Times
In 1928, the government was trying to rid the land of milkweed... the "noxious weed". By 1943, however, the government was advertising for everyone, and anyone, young, or old, to collect the milkweed pods, and to be paid for doing so! The milkweed pod's "virtue had been discovered" as naturalist Ralph Waldo Emerson had stated.
~~~~~~~~~~~~~~~~~~~~~~~~~~~~~~~~~~~~~~~
I had heard for years from my husband Sheldon Buckmaster's mother Lucille Buckmaster about how during the WWII era, she would go into the fields, especially near their Petoskey (Emmet County) MI home, and pick milkweed pods for the war effort. She told how the milkweed floss was used for the filling in flotation vests for the military personnel. During WWII civilians were a very important part of the war effort, and everyone truly put forth! I had not realized the scope of this Milkweed Pod collection effort in the Emmet County area until a friend shared with me, to look through, many of his family's photos. Then I discovered this ORIGINAL photo below of the Emmet County Fairgrounds with some of the 125,000 bags of pods, collected in 1944. The Emmet County Fairgrounds was the "world's largest milkweed center, and the location of the only processing plant of its kind in the world" according to the article shown below, from the Petoskey Public School student written newspaper "The Hi-light" from the Thursday, November 2, 1944 issue.  ~ Karla Howard Buckmaster
NOTE: Records show the first fair was held here i 1895 by the Little Traverse Agricultural Association, but old timers told that horse racing was conducted here prior to that. 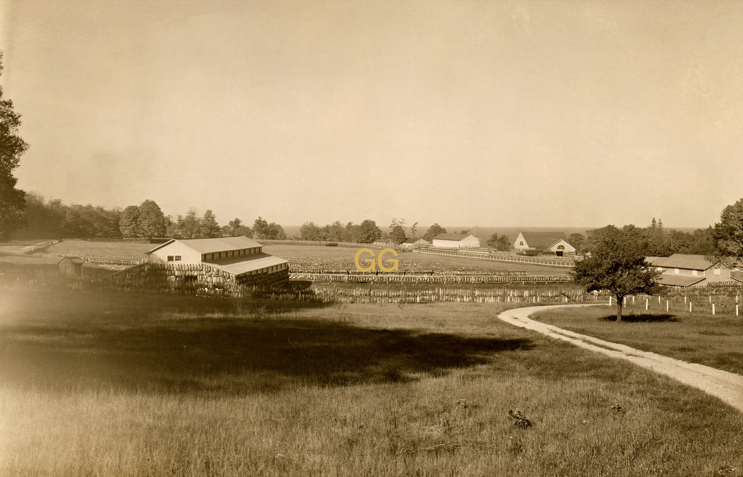 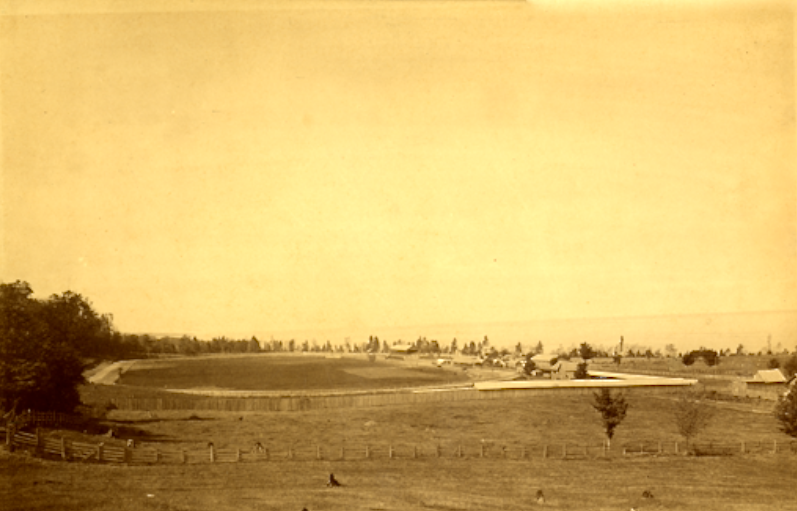 Emmet County Fairgrounds About 1890 ~ PRE WWII With No Milkweed Pods Hanging From the Fences. The first fair was held here in 1895, and actual horse racing was held there before 1895. On the far right can be seen the St. Francis Cemetery with some tombstones.
A weed goes to war, and Michigan provides the ammunition by Gerald Wykes
(Article written in 2014 for the Michigan History magazine)
Picking Milkweed Pods In The Petoskey Area
~ Community Effort ~
In Gerald Wykes' Michigan History magazine article to be accessed above, he wrote of Petoskey's community of the Rotary, Kiwanis, Business Owners, and Chamber of Commerce conducting a massive "Milkweed Picking Bee" because Petoskey Community members were proud of being at the center of the new milkweed pod industry. Wykes continued, "The group had a picnic lunch in the field near the Bear Creek fire tower, followed by an invocation and much speechmaking. At least 1,000 bags were picked before rain ended the day." Although the following photos were not labeled, they were part of a collection of milkweed photos, and certainly could have been taken the day described in Gerald Wyke's article above. 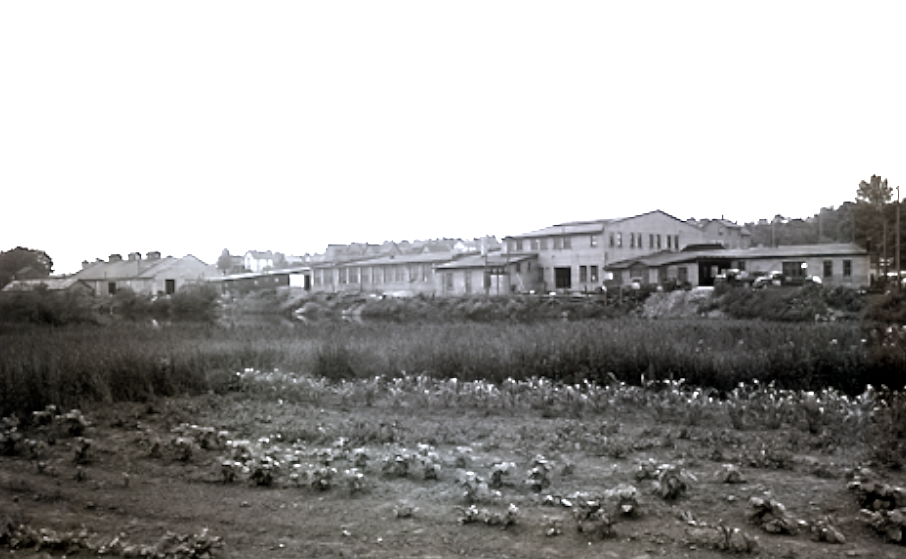 24 December 1941 ~ Northern Michigan Review
Photo News Article Below: Compare the building below with the photos above and below it. I do not know IF this is the same building, but it is certainly very similar. Does anyone know where this Blackmer Rotary Pump Company was definitely located in Petoskey? 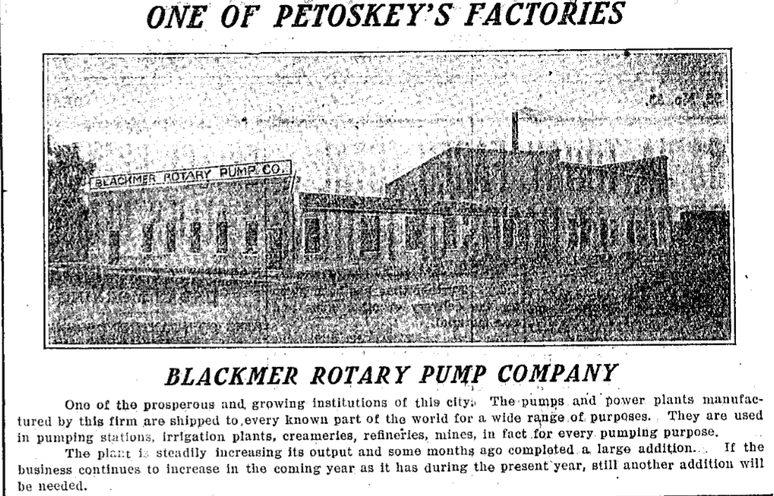 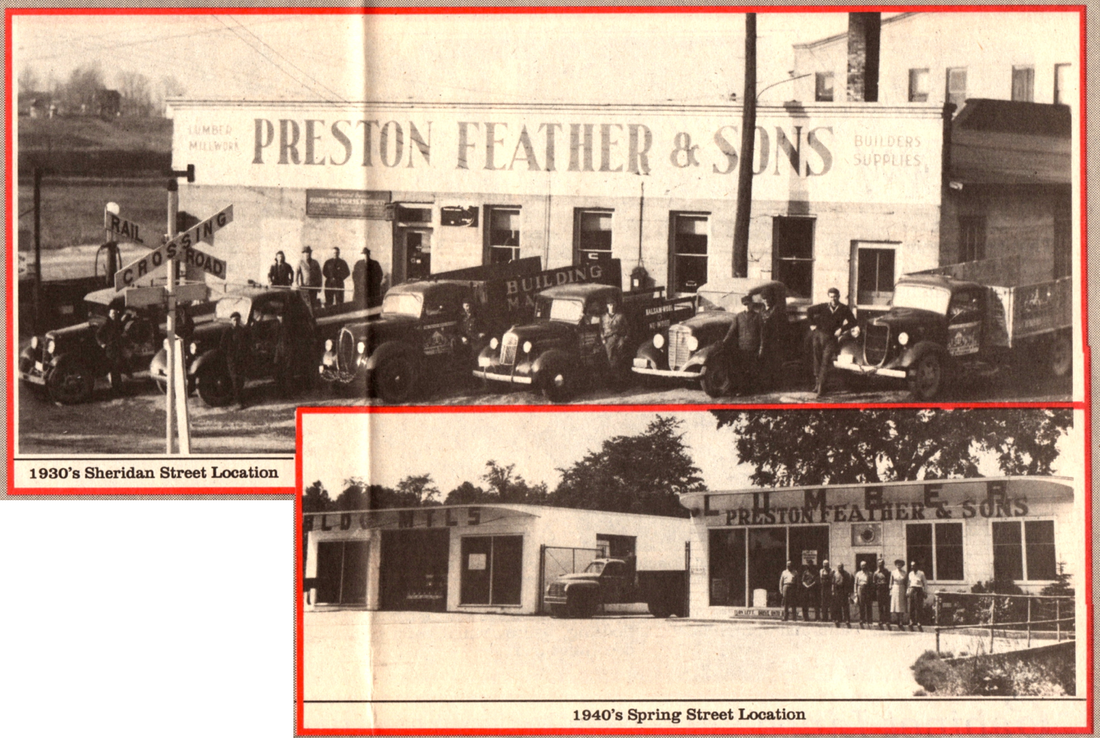 Photo Above: In about 1994 Preston Feather advertised in a special 4 page section of the Petoskey News Review that the store was "Celebrating 79 Years". The history of the photos above included the following: "The first lumber outlet was on Sheridan Street at the railroad tracks. When World War II broke out, the government took over the building, and began harvesting and manufacturing milkweed floss for use in military lifejackets. Preston Feather & Sons moved their building supply business to 405 East Lake Street. An advertisement from May of 1944 says 'Lumber Has Gone To War'. In their Lake Street location, Preston Feather offered a full line of building materials.
After the war the lumber company moved to its present location at 900 Spring Street and continued to grow as Petoskey did...."

26 April 1995 ~ Petoskey News Review
1929 Sanborn Map below shows the railroad tracks going into the "Preston Feather & Sons Lumber Yard." The tracks ran near Porter Street, and on across Spring Street. That is the railroad track angling through Preston’s parking lot now in 2020, explained by the way those buildings are shaped at an angle. That is why/how the Flat Iron Building in Downtown Petoskey (behind the Chamber of Commerce Building) was built in the shape it was built… to accommodate the railroad tracks. So, the P-F company obviously owned their Spring Street property even before they were basically forced to move there during WWII. 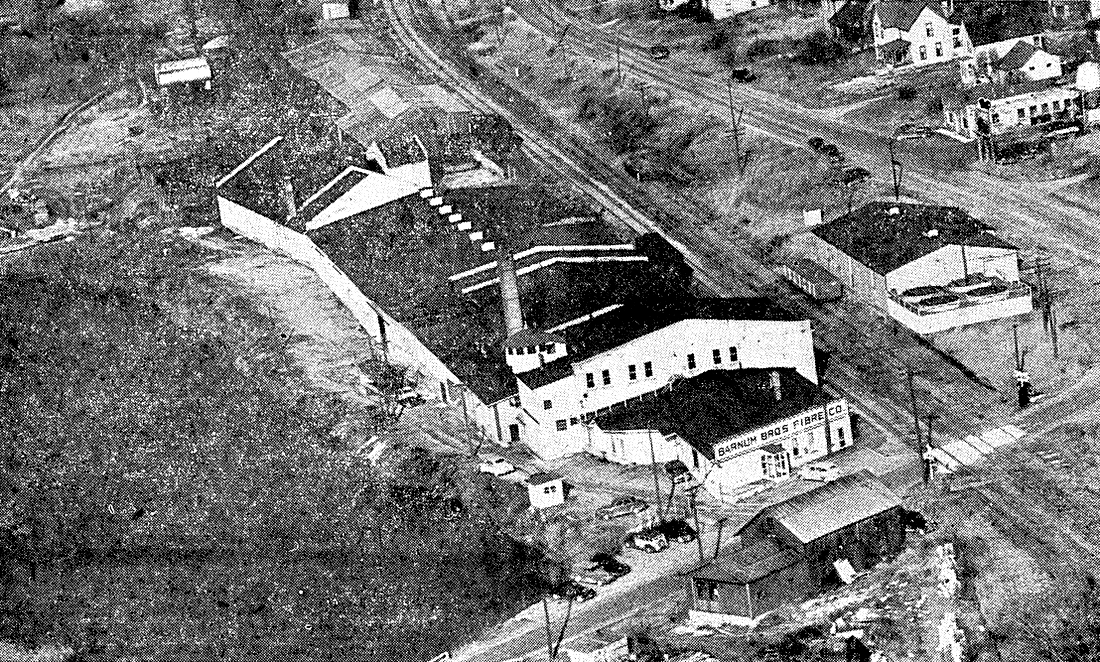 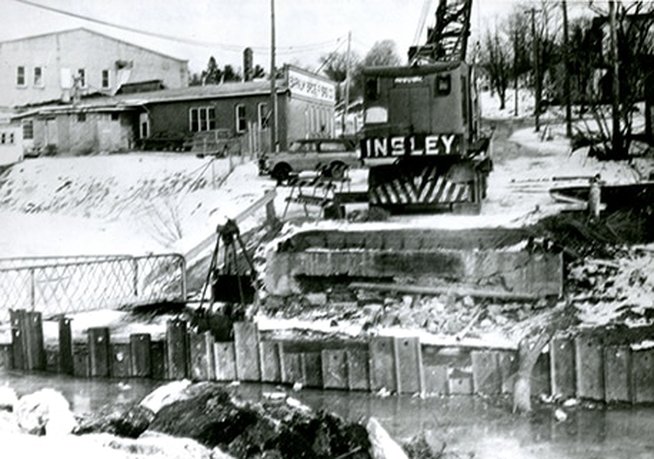 1970 ~ The Bear River Bridge on Sheridan Street during construction with Barnum Bros. in the background 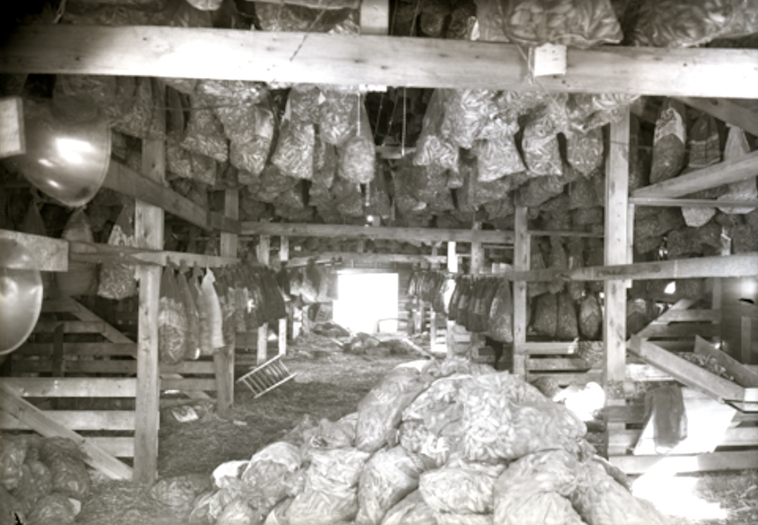 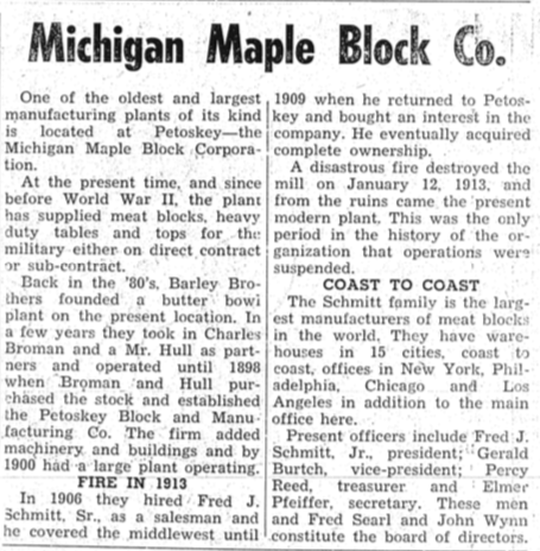 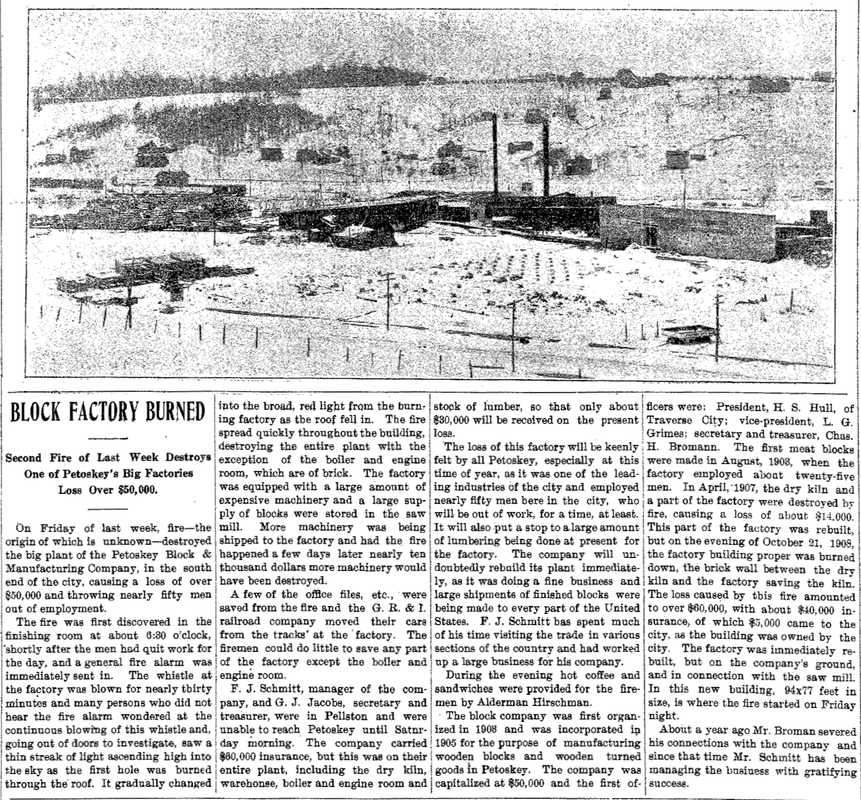 18 January 1912 ~ The Petoskey Record
1 November 2016 ~ Photo Below: This is the same location on Standish Avenue as the OLD photo above showing the milkweed pods hanging on the fence to dry during the 1940s. The fence may be a different fence, but it is in the same location. The white in the field behind the fence is milkweed pods. 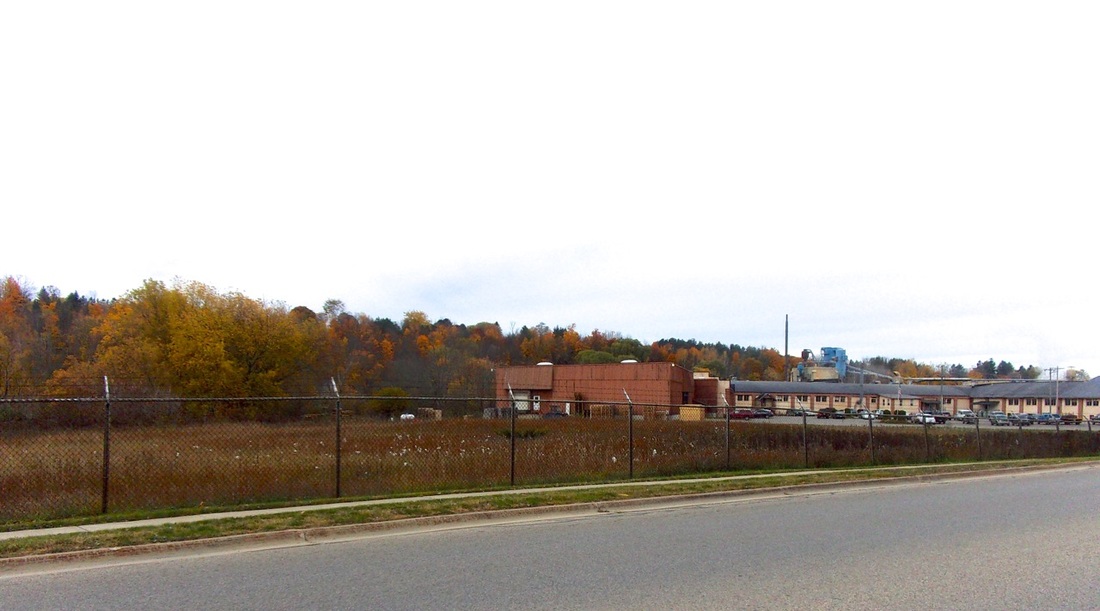 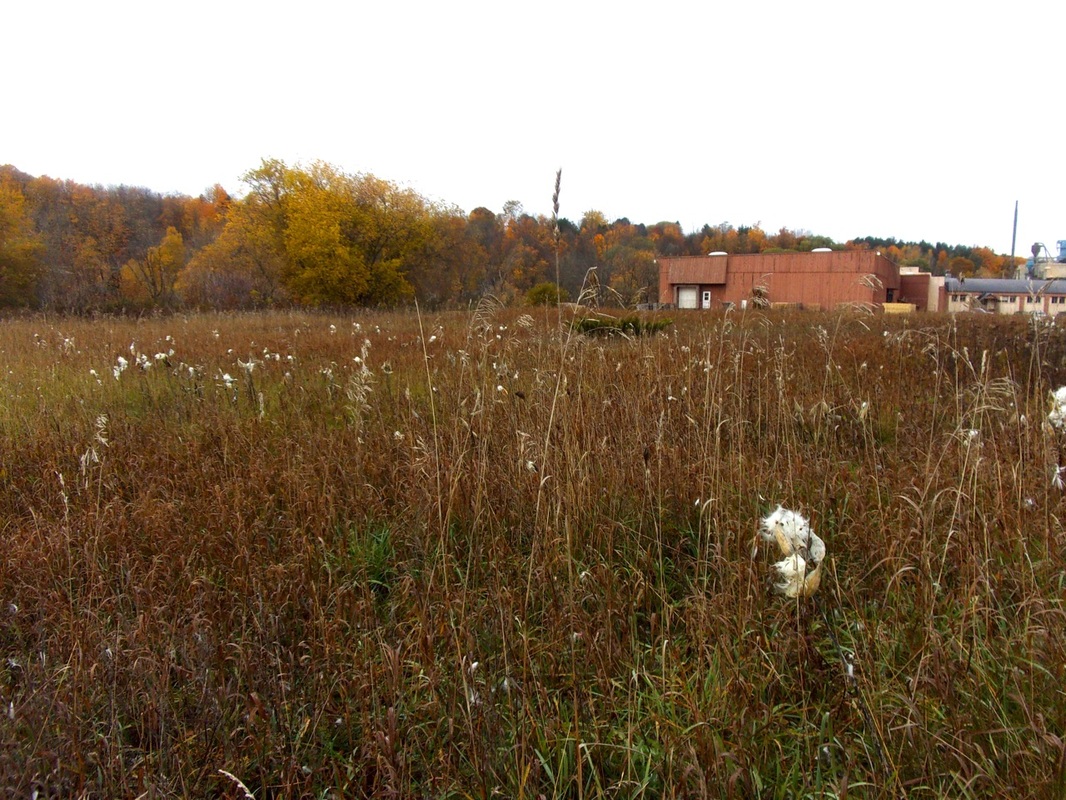 1 November 2016 ~ Milkweed pods growing in the field behind where bags of milkweeds hung on the fence to dry during WWII. 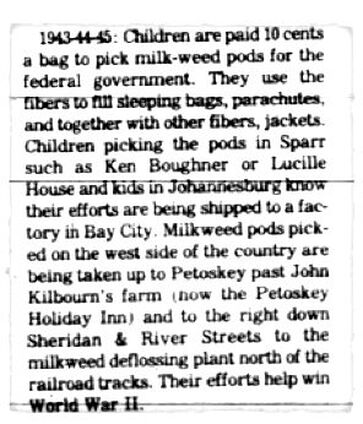 Part of Timeline from 1987 Gaylord Herald Times/Sesquicentennial
~~~~~~~~~~~~~~~~~~~~~~~~~~~~
Life Magazine Pictures of Milkweed Fluff (Pages 12, 13 and 14)
3 November 1947
"The fragile beauty of the seed of the wild milkweed, which drifts through the country every fall, means nothing to farmers, who consider it a nuisance. But Life Photographer Wallace Kirkland, who took these pictures, appreciates milkweed because of the pretty patterns its tufted seeds make. Each milkweed pod holds about 170 seeds and to each seed are attached at least 400 fibers which waft it through the air. Though the seed looks delicate, it is a durable traveler, flying 10 miles in good wind before the seed comes to earth. The floss of milkweed is six times more buoyant than cork and was used during the war in life belts and flight jackets. Dr. Boris Berkman, a Chicago physician who headed milkweed processing for the government during the war, has gone into the milkweed business and harvested a crop this fall in Illinois. He plans to use the floss for stuffing pillows, blankets, bedclothes."
A 2014 on-line booklet titled "Milkweeds A Conservation Practitioner's Guide"
by Brianna Borders and Eric Lee-Mader offers an extensive overview of the Milkweed
including its connection to Petoskey MI during WWII.
Milkweed Story
In 2015 Wayne Richard "Dick" Smith, wrote about his childhood connection to Petoskey being the World's Milkweed Center. "In 1944, I and about a half dozen other kids in my Petoskey neighborhood were enlisted to fold letters and put them in envelopes ready for mailing. We were paid 25 cents per hour and were employed for about 3 hours a day for over 2 weeks, folding and enveloping thousands of letters to Boy Scout troops all over the US and Canada, soliciting the picking of milkweed pods to replace kapok in the manufacture of life jackets. If I recall correctly it was August Miller who was in charge of all this. He had a son, about a year older than I, who graduated the University of Michigan, was an ROTC student and became career military. The administrative offices of Milkweed Corporation were in the building now occupied by American Spoon Foods on Lake Street. There, in the backroom, we kids folded the letters and put them in envelopes and sealed them. I remember that when the job was done, I had about ten dollars that I had earned, and I bought my first wristwatch with it. It was a good watch too - $10 went a long way in 1944."
Obituary Below: August E. Miller, as Dick Smith mentioned above with his connection to the milkweed center, was the "organizer and operator of the milk weed floss factory in Petoskey during the war years". 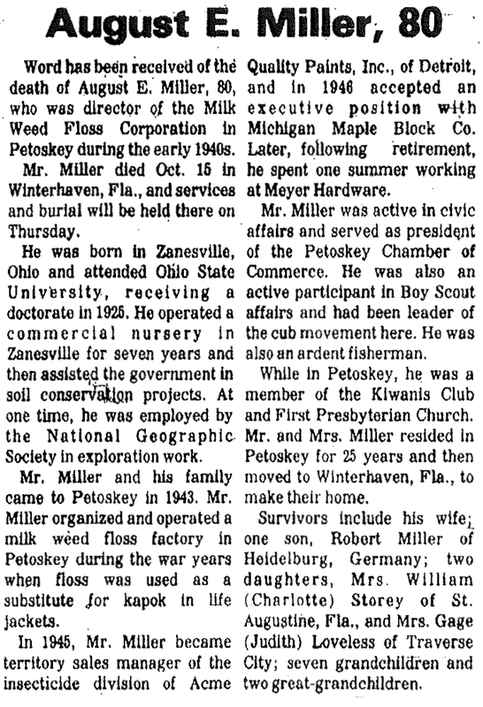 Petoskey Newspaper Articles (Posted Below)
Document the Chronology of the
Milkweed Center of the World Located in Petoskey. 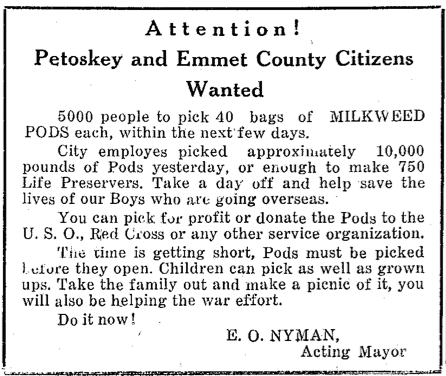 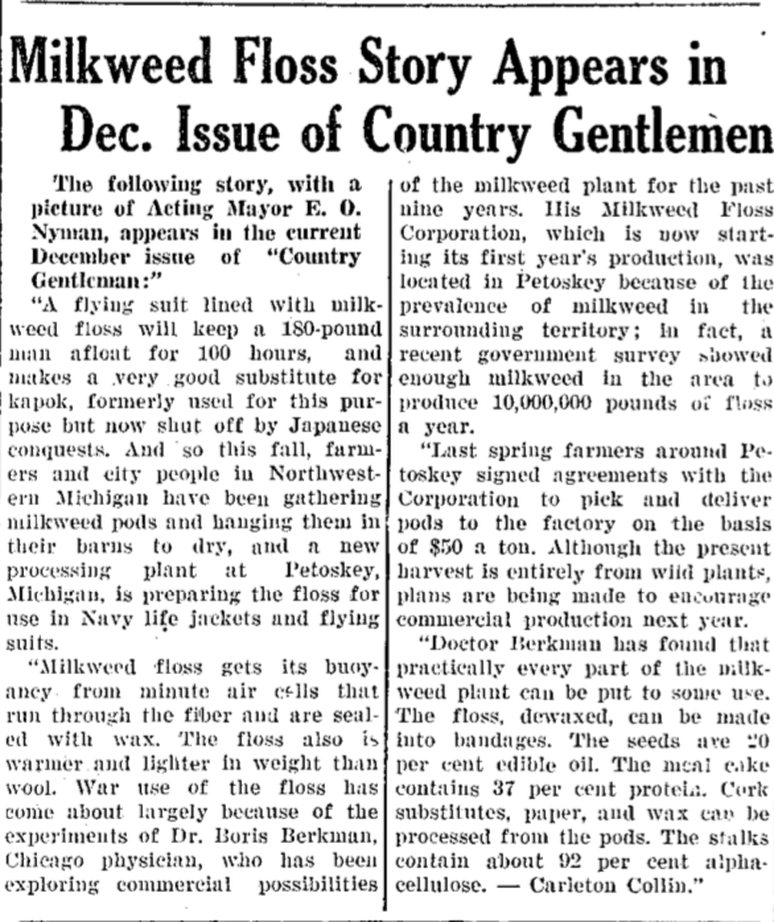 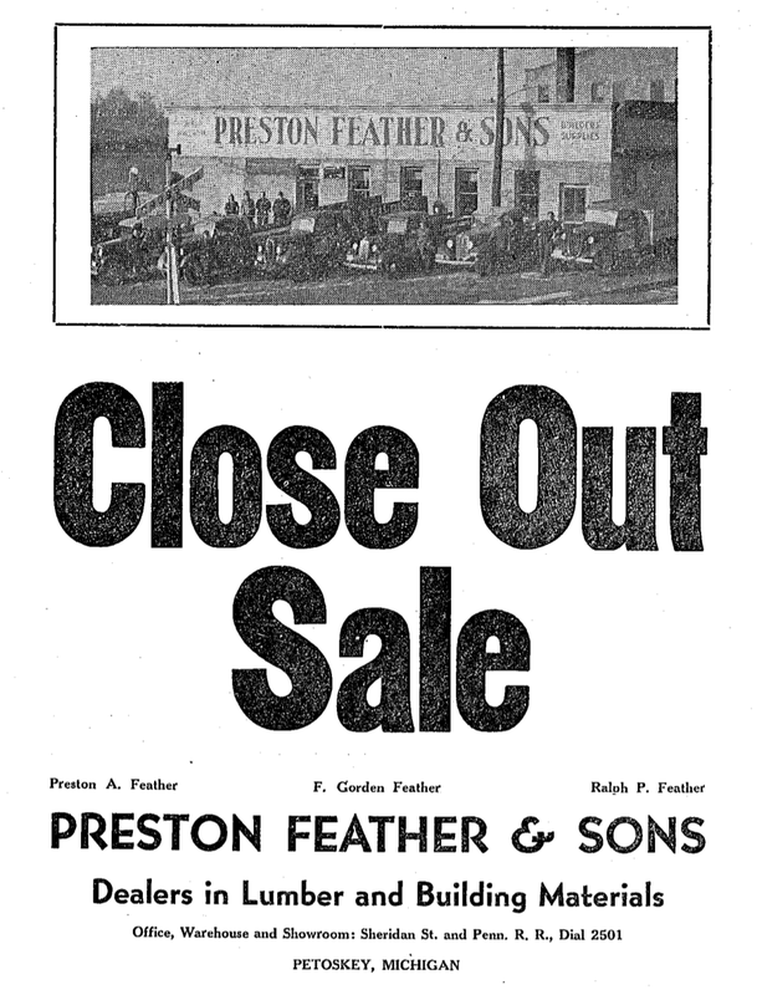 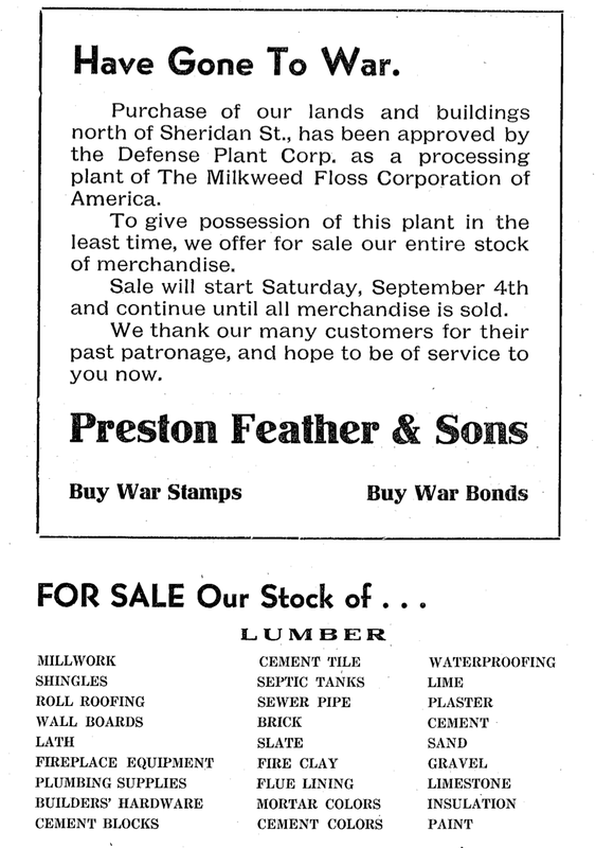 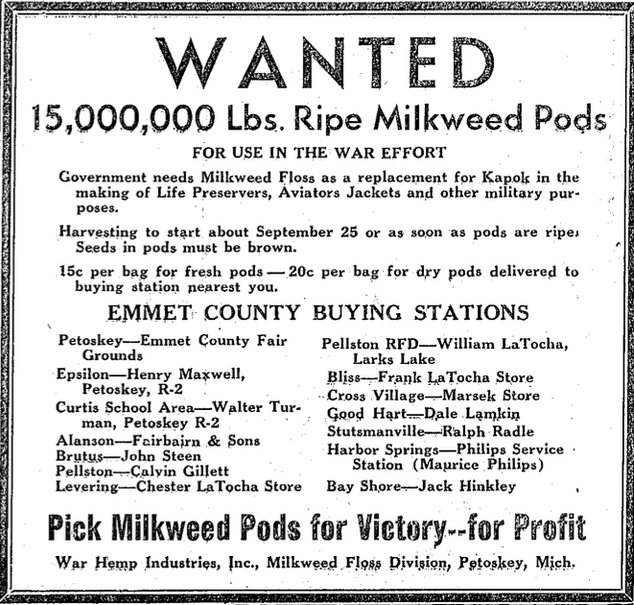 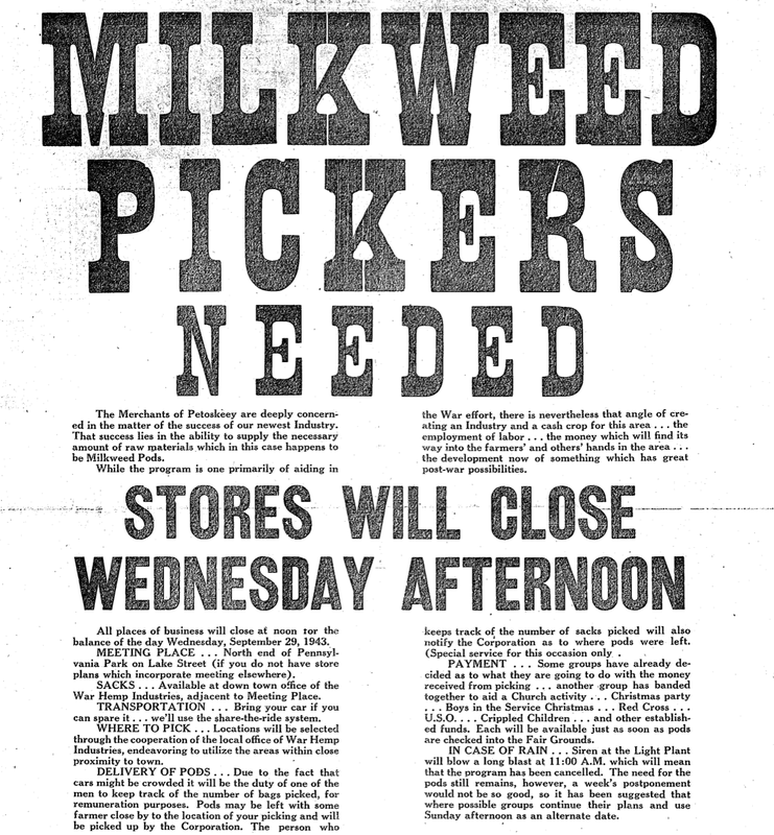 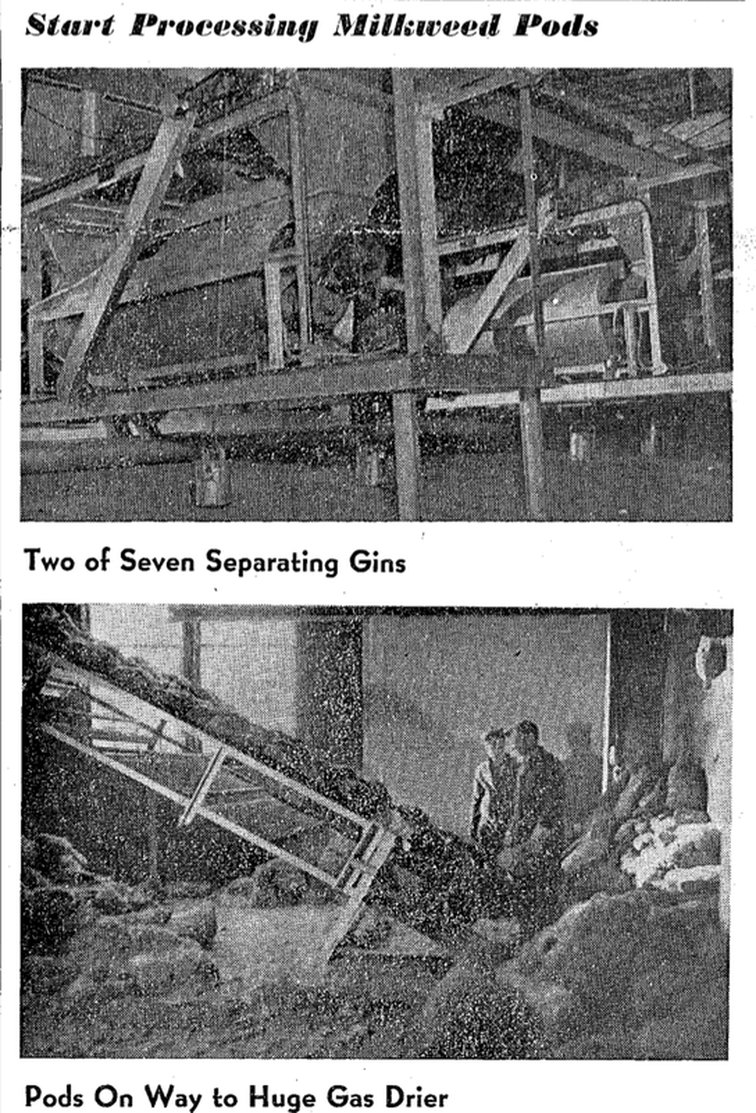 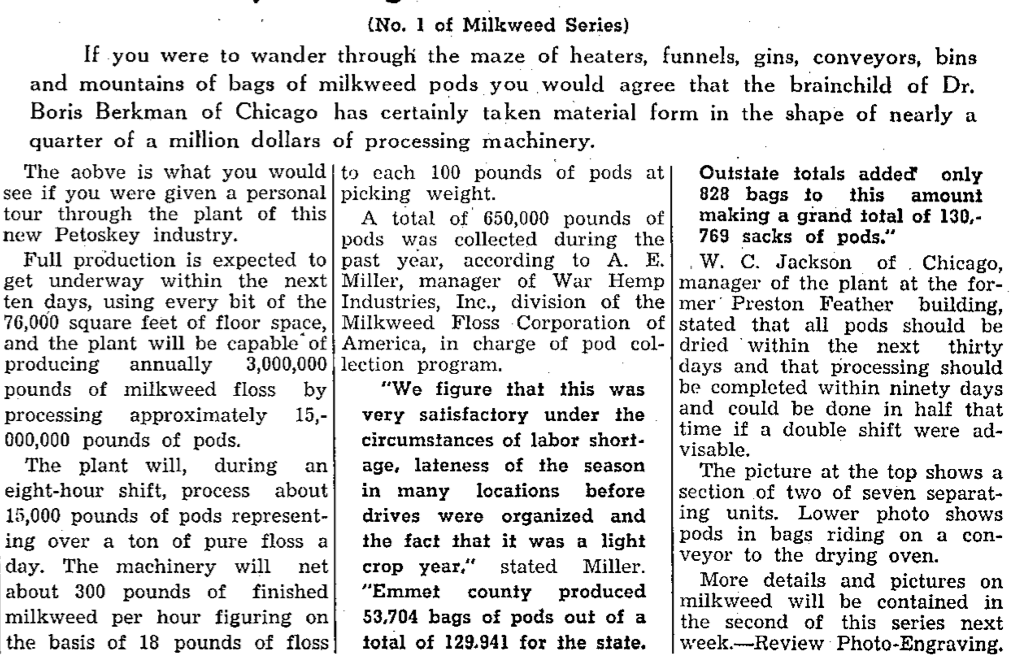 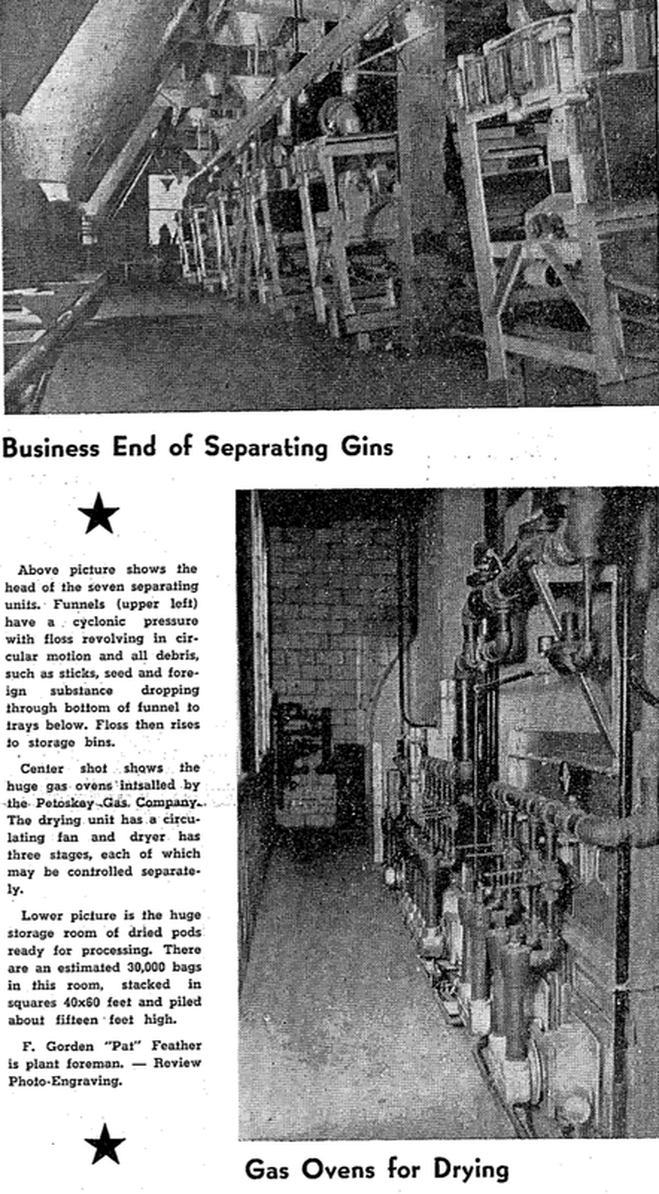 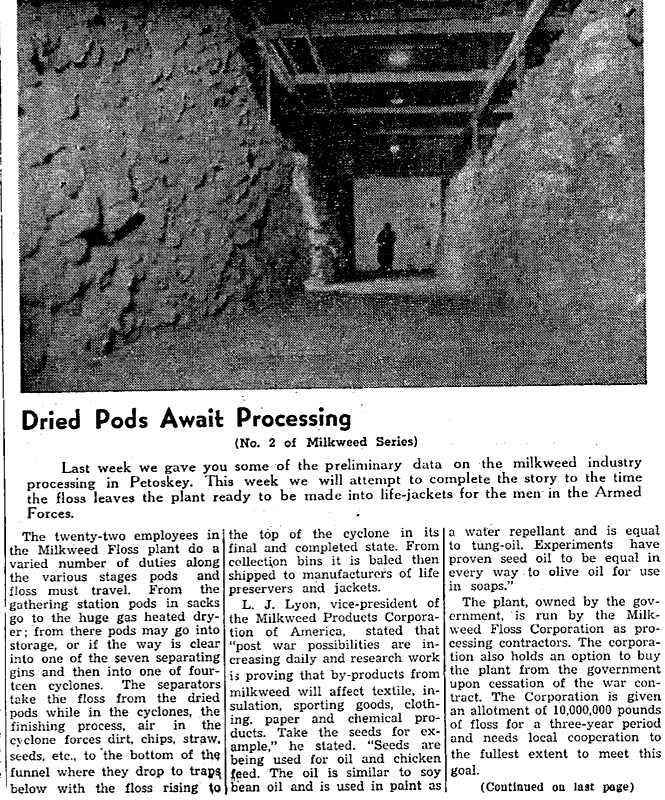 13 January 1944 ~ Northern Michigan Review article continued from above...
What was to happen to the milkweed industry
AFTER the cancellation of government contracts for floss? 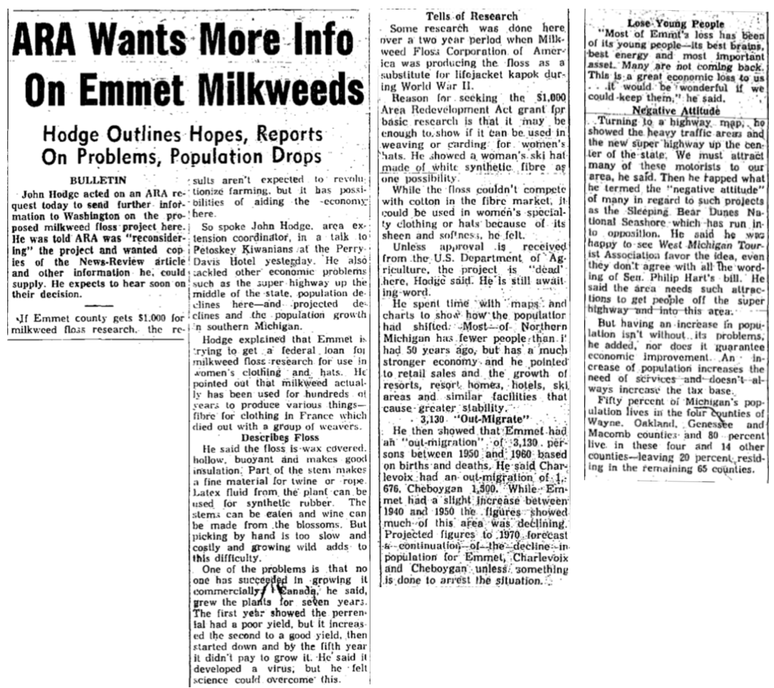 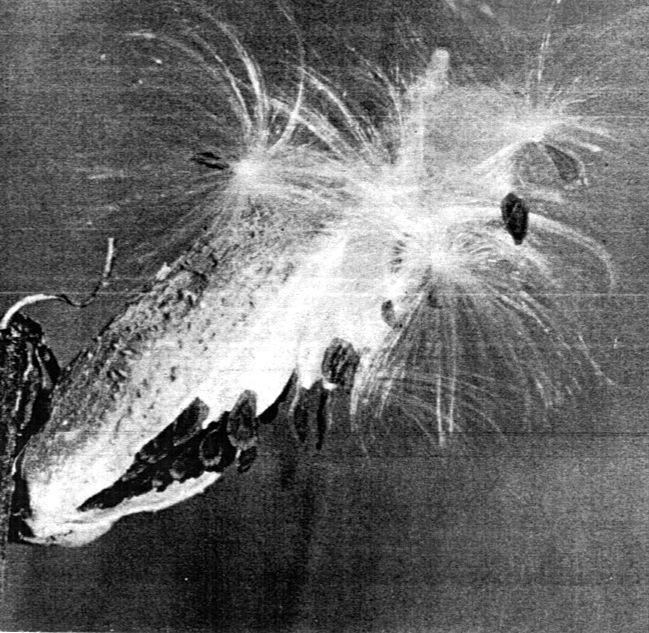 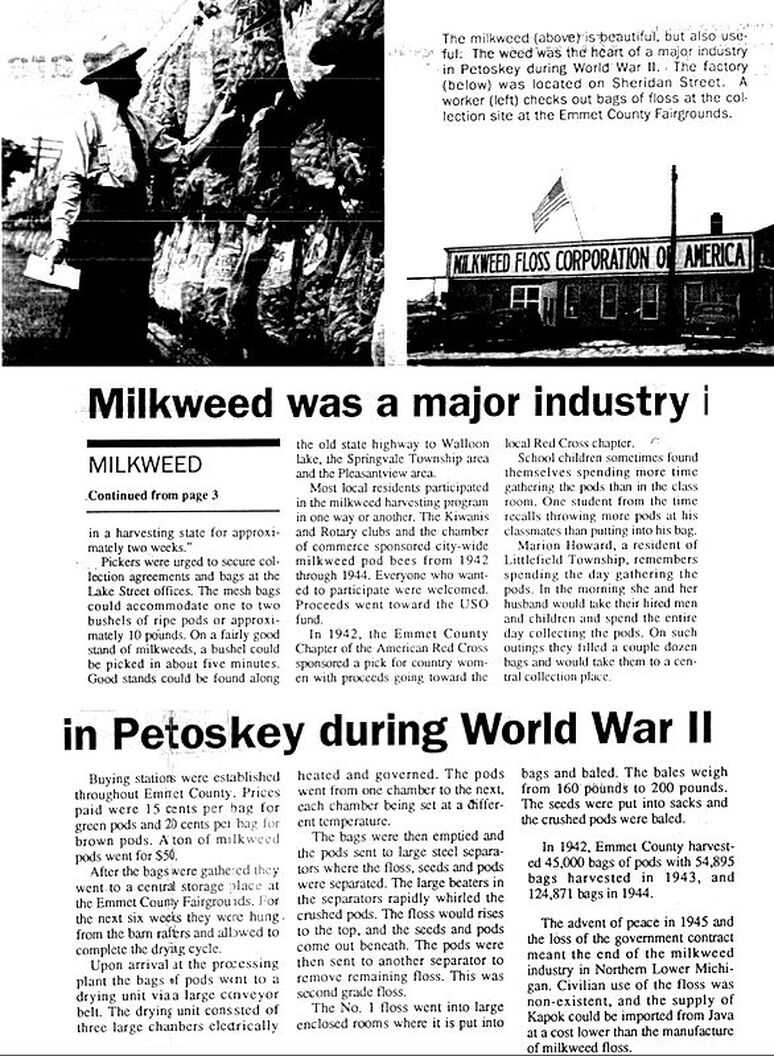 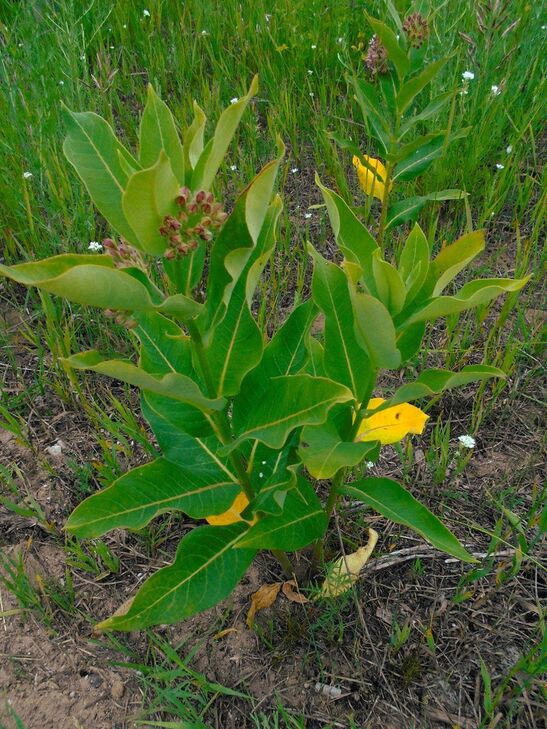