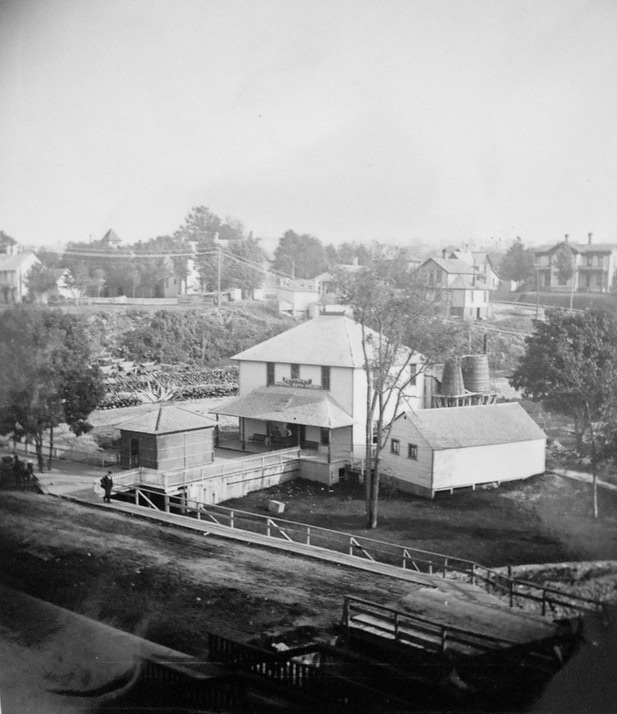 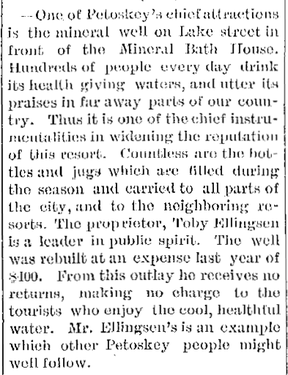 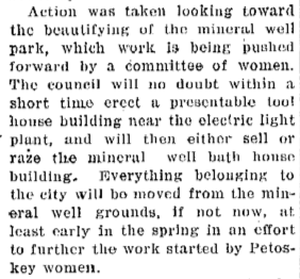 15 June 1915 ~ Petoskey Evening News
Photos Below: A booklet titled "Petoskey's Colorful Past A Historical Sketch of the City" on page 31 explained: "Bear River Gazebo (Mineral Well Park) West Lake Street ~ Built in 1915 the current Gazebo replaced a wood pavilion which surround the well in 1890 and provided a place for people to fill their water jugs. A bath house stood behind the pavilion where visitors could bathe away their ills in the highly acclaimed mineral waters. Though the bath house lost popularity around 1900, the mineral well continued to attract visitors from all over the country. In 1917, Vice-President Marshall and his wife spent a month in Petoskey and went to the well daily to partake of the 'health-giving' waters. Luxury hotels encouraged their guests to use the well during their stays.
The Gazebo is constructed of reinforced concrete, wood and shingles. Service clubs and private construction companies restored the structure in 1981." 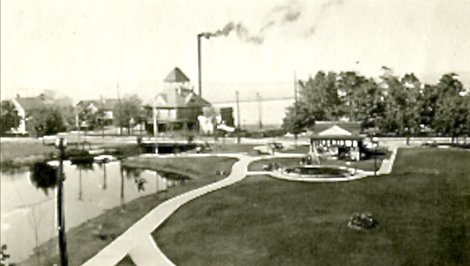 Mineral Well Before The WWI Monument Was Set

11 July 1916 Petoskey Evening News Article Below: In reply to (see article above) Dr. Crotser's asking for exclusive rights to sell the Mineral Well Water... People, at one time in disgust when Mr. Cushman had ownership, "filled the well full of stone, iron and every other thing too numerous to mention until the beautiful flow of water had stopped." 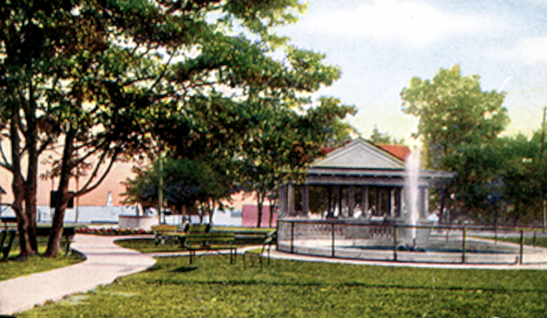 Mineral Well Park Petoskey MI
Postcard Below: This must have been taken after 1939 when this new concrete fountain was installed as noted in the 1 June 1939 article and photo posted below. 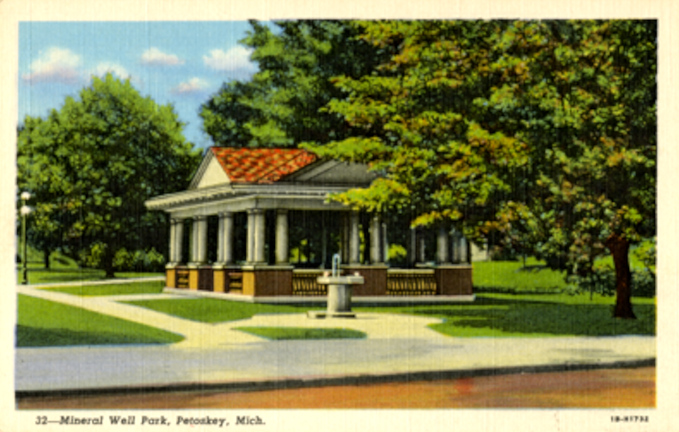 Mineral Well Park Petoskey MI
The hard-to-read writing below the photo above is transcribed as well as possible as follows:
"Supplants Historic Fountain
New Concrete Fountain at Mineral Well Park
Remember the tall silk stove pipe hat worn by our important personage the honorable Vice President Thomas Marshall?
It brings back memories of the old Mineral Well Park with it gushing sparkling health giving ?. That was the reason for his visits here.
The large concrete fountain next to Bear River inactive for the past few years has been supplanted by the neat concrete fountain shown above.
The other historic monument to our pioneer located just west of the above is to receive the same treatment which will greatly improve the appearance of the park. ~ Review Photo Engraving"
Mary Jane Doerr has written a book Bay View: An American Idea in which she described President Wilson's Vice President Thomas R. Marshall summering many years in Petoskey. Part of Doerr's work is posted on the Hemingway Society website.
Please do not copy the photos on this site, many of which have been submitted by private individuals...
just come back and visit the site often to view the photos.

Three Photos Below: Allan McCune a successful Petoskey businessman and local historian donated several of his albums to Petoskey's Little Traverse Historical Museum.
One of his albums included these photos of the
1923 Dedication of the Plaque in Honor of WWI Veterans. 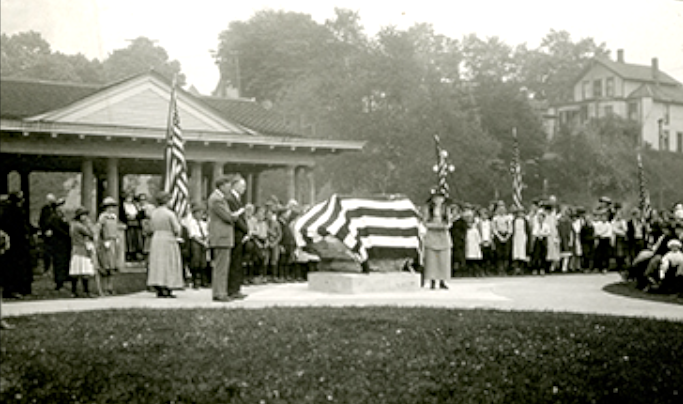 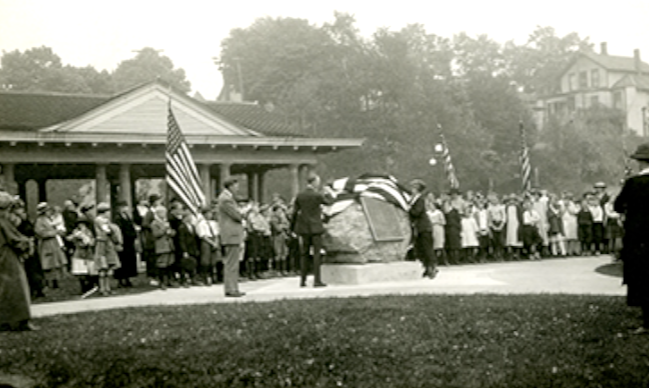 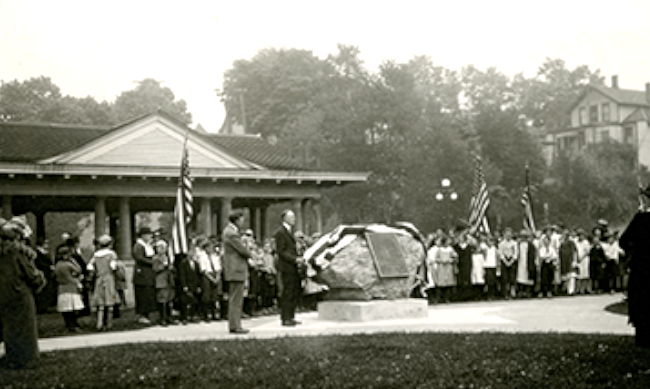 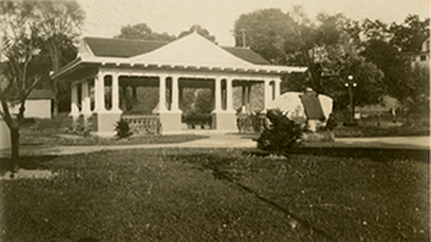 The WWI Memorial Had Been Set 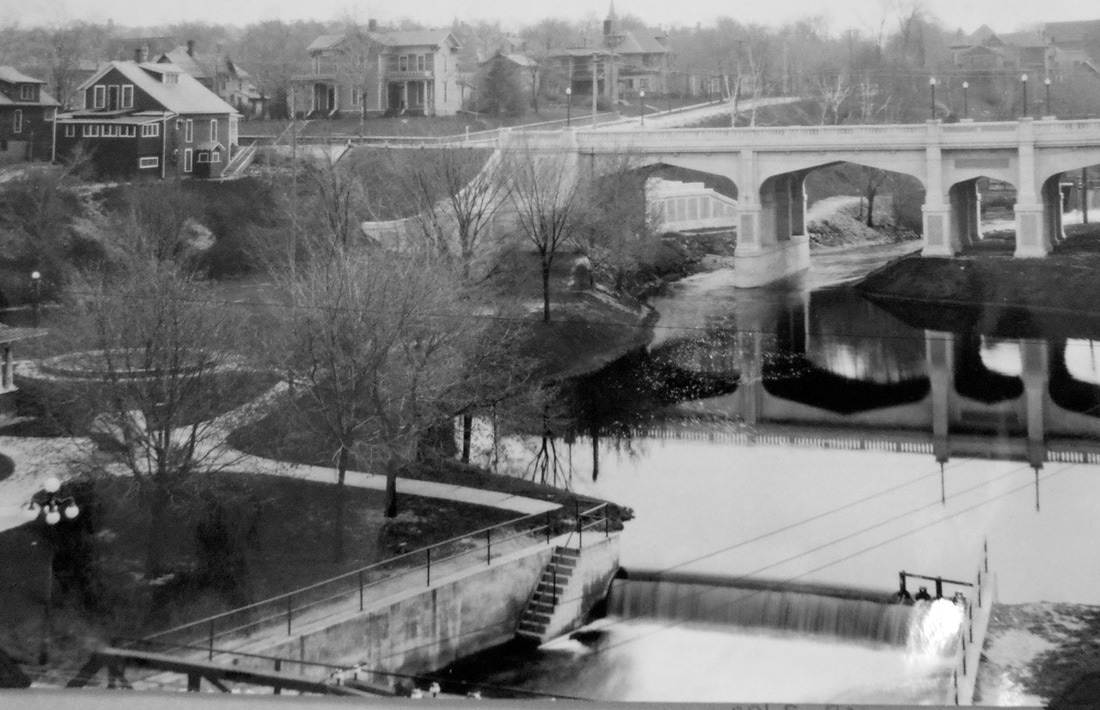 WWI stone monument can be seen with the NEW Mitchell Street Bridge erected in 1931-33. 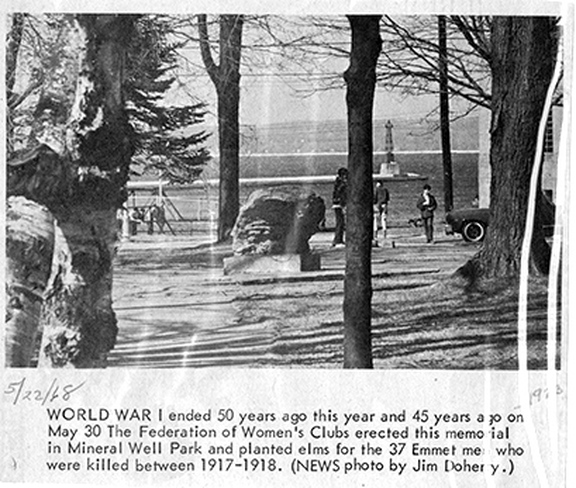 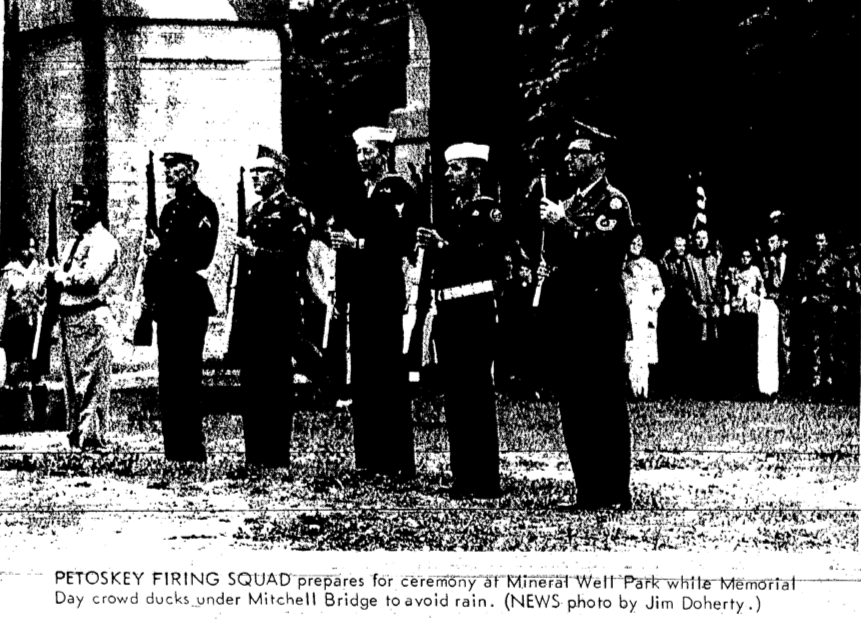 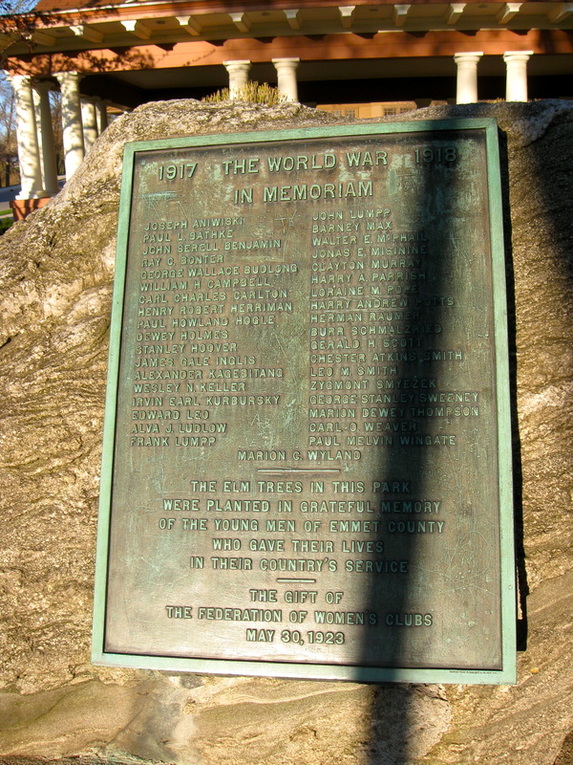 Irvin Earl Kubursky’s name was spelled on the plaque with an “I”, but in his newspaper death notice, an “E” began the name.

According to the 22 March 1923 Levering Local news article posted farther above: This memorial was for the Emmet County World War I Heroes who gave their lives in their country’s service during the World War. The names included only those who lost their lives during the time of American participation in the war, up to and including 22 November 1918, and the listed names were sent March 19 (Year not named) to the firm designing the plaque. Many of the memorialized died due to influenza, often followed by pneumonia, (one from tuberculosis) never having seen battle. They had been called, however, and were in service to the country upon death.

The local Petoskey American Legion was named after Carl Weaver who had been killed in battle while in France.
Obituary Below: Melvin C. and LaVina (Brown) Wingate were the parents of Paul Wingate whose name was on the WWI plaque on the big rock in the park. 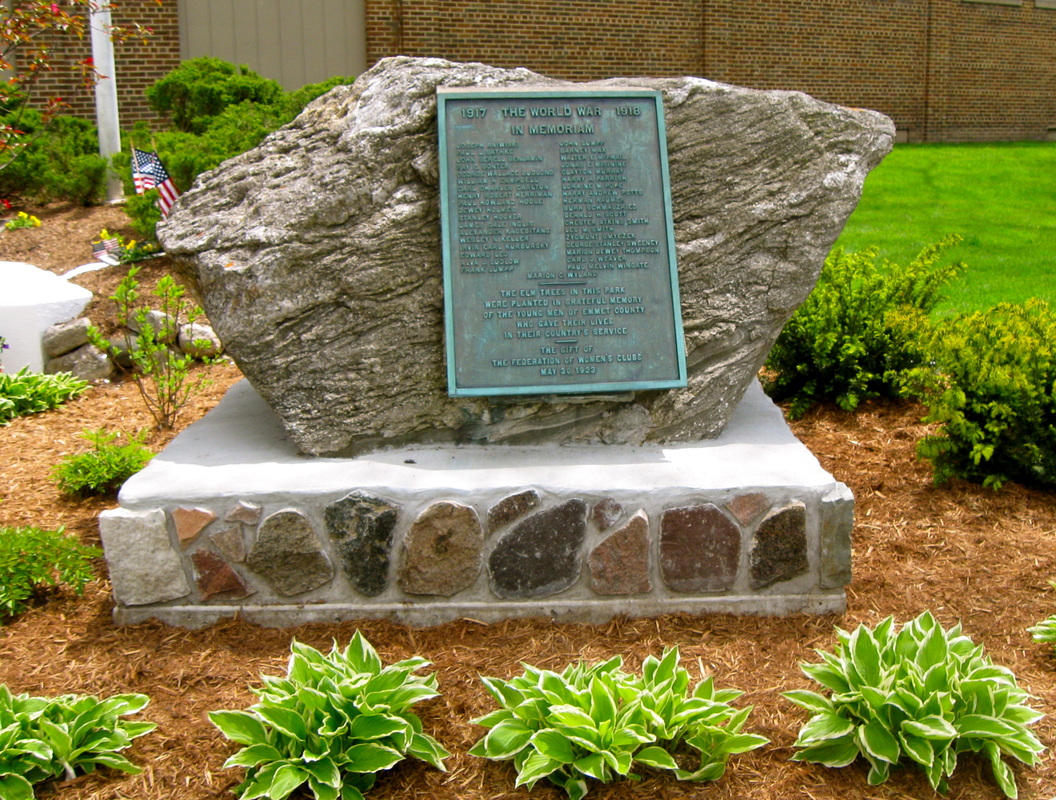 27 May 2013 ~ Memorial Day
The inscription, written below, on the plaque in the photo above, on the WWI memorial
no longer applies to the trees in Pennsylvania Park
because this plaque was first placed on the site of the Mineral Well near the Bear River. 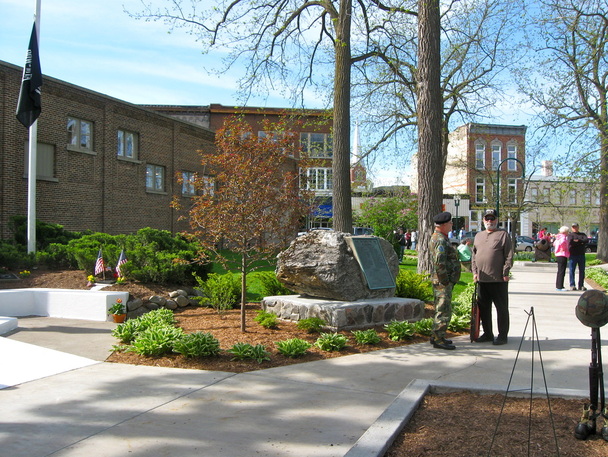 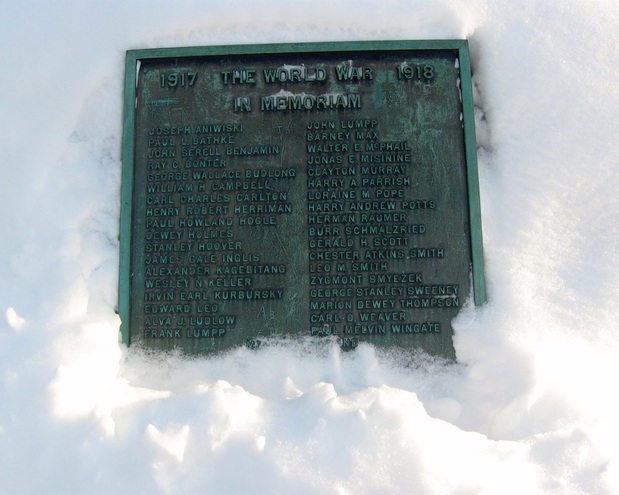 All newer photos on this page were taken by Karla Howard Buckmaster.
Pennsylvania Park
MEMORIALS and MARKERS
TOP