Please do not copy the photos on this site, many of which have been submitted by private individuals...
just come back and visit the site often to view the photos.
"Clicking" on some color highlighted words may access additional information;
Most posted items will enlarge by "clicking" on them.otos. 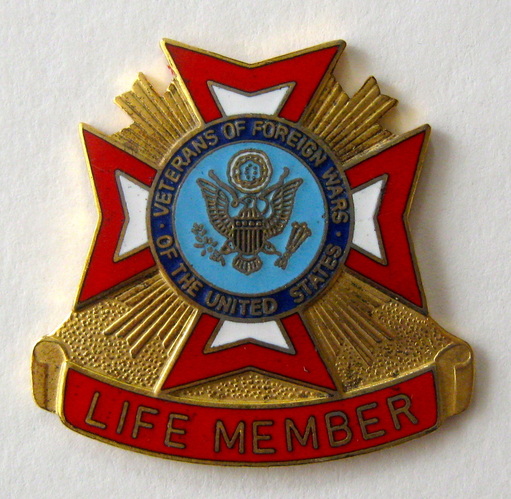 A Badge of the VFW belonging to Kenneth J. Starr ~ Life Member 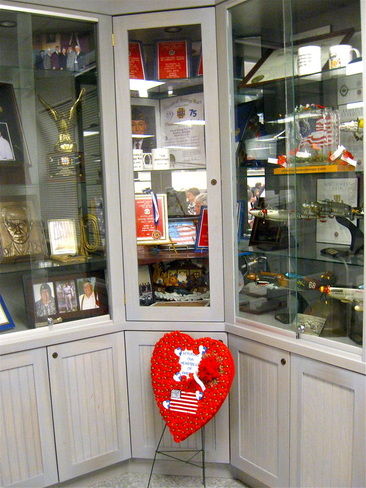 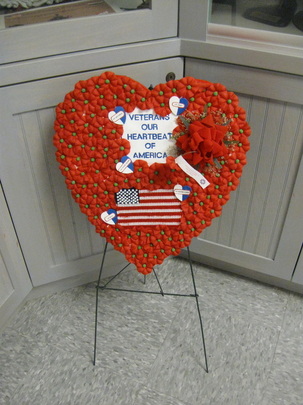 All photos of the VFW Post 2051 Displays were taken 11 November 2012 by Karla Howard Buckmaster. 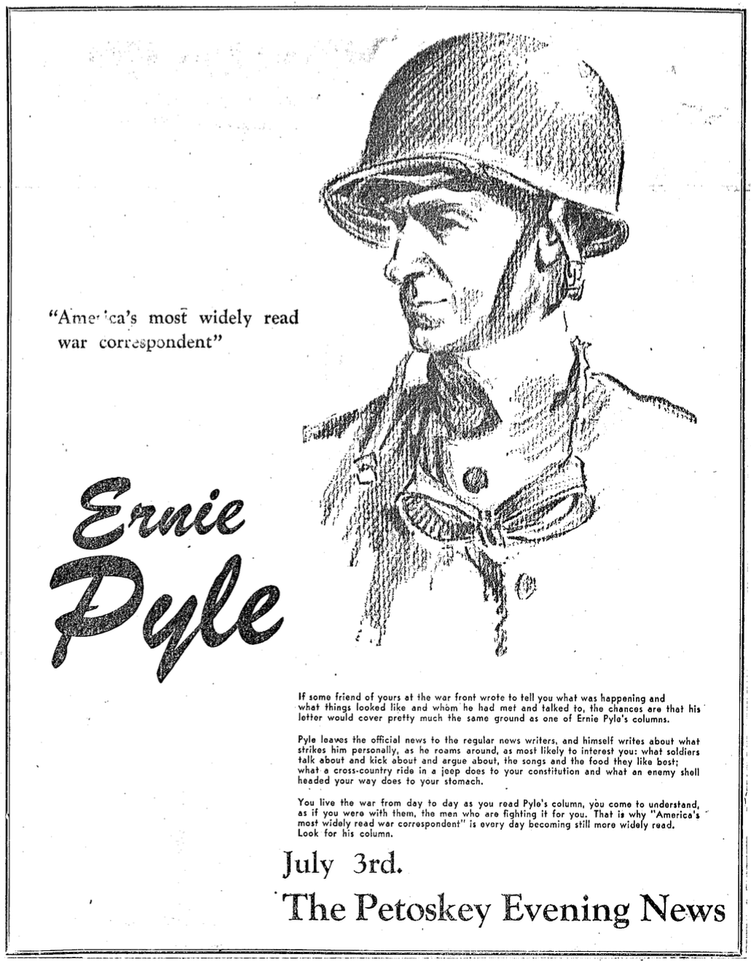 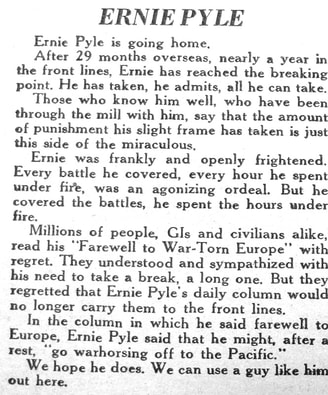 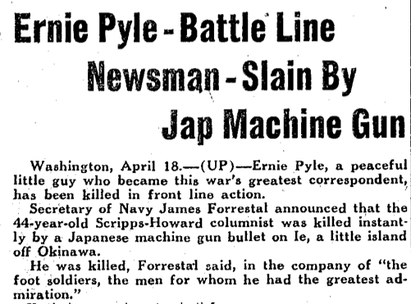 
​The article below left was the LAST column written by Ernie Pyle, published in the 18 April 1945 Petoskey Evening News. The same newspaper featured on the front page, the announcement of the death of Ernie Pyle in the article at right. 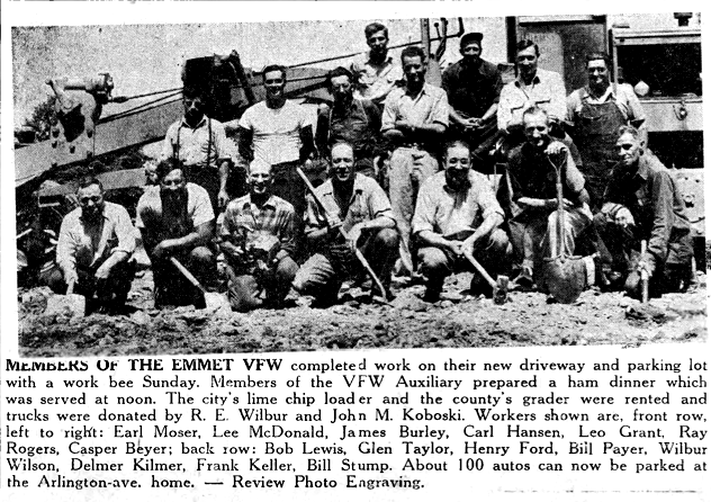 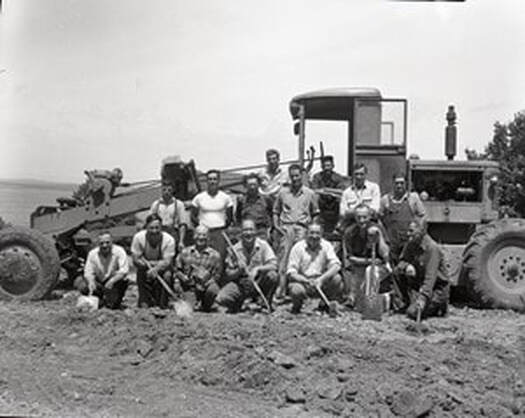 Greenwood Photo Archive Collection from Petoskey newspapers (19 July 1951)
The September 1951 Northern Michigan Review article below describes the presentation of the Ernie Pyle Plaque shown in the photos above. The photo below shows artist sculptor Stanley Kellogg (on the right), the creator of the precious plaque. 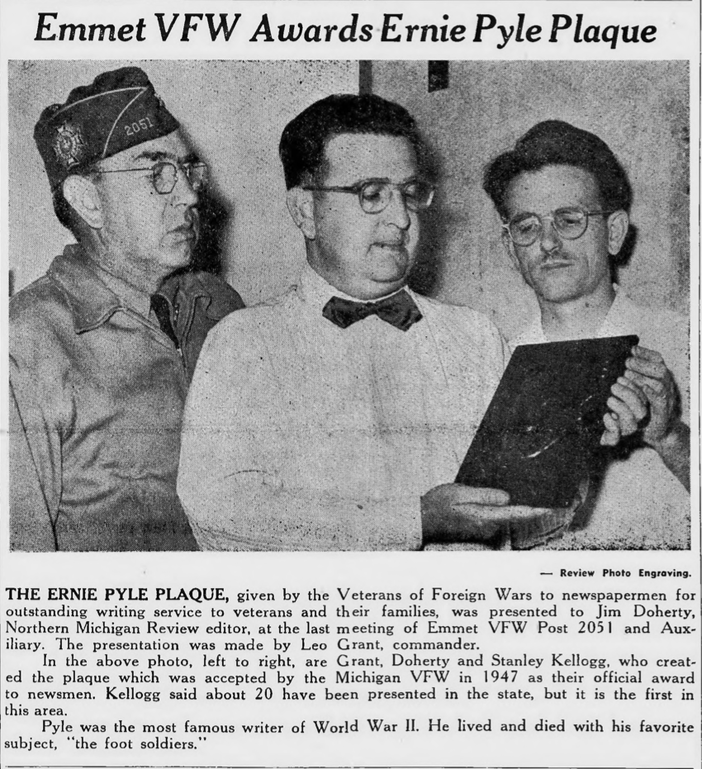 27 September 1951 ~ Northern Michigan Review
The obituary for Stanley P. Kellogg stated:
"Mr. Kellogg served in the Army in World War II, then returned here and with his wife Barbara, opened the Kellogg Studio where he established a nationwide reputation. He did portraitures of famous and ordinary personalities, created artistic fountains, sculptored pottery and made gift items that were soon being shipped across the nation.

The Veterans of Foreign Wars and Auxiliary commissioned him to create a likeness of the late World War II correspondent, Ernie Pyle, which they use as national journalism awards. He created the likeness from six different photos of the beloved correspondent." 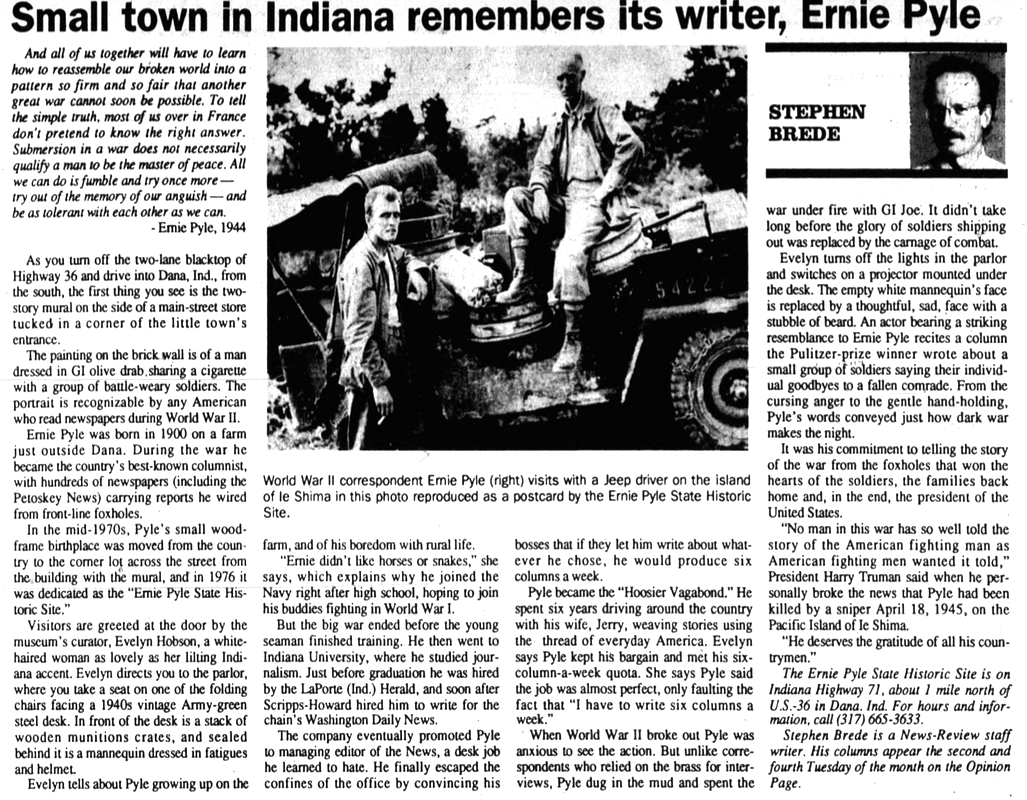 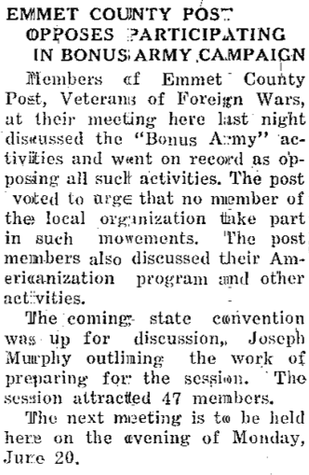 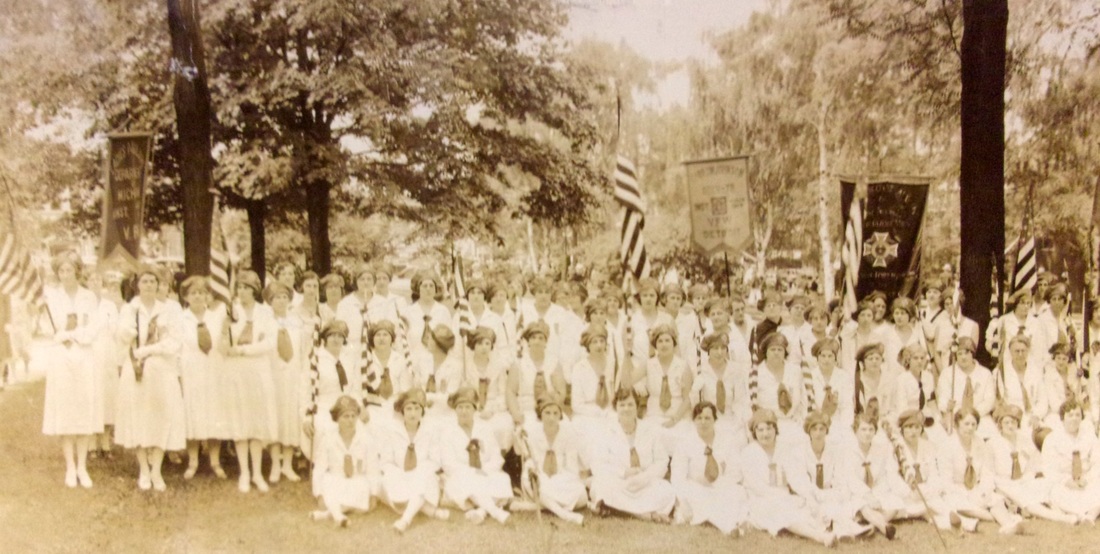 LEFT SIDE of the photo above: Ladies Auxiliary to the Veterans of Foreign Wars Department of Michigan Allied Veterans Organization

CENTER of the photo two above: Ladies Auxiliary to the Veterans of Foreign Wars Department of Michigan Allied Veterans Organization

RIGHT SIDE of the photo three above: Ladies Auxiliary to the Veterans of Foreign Wars Department of Michigan Allied Veterans Organization
On 24 June 1932 The Petoskey Evening News was filled with military happenings of Petoskey, related to the photo above taken by photographer Foley. Prior to the huge gathering reported in the 4 June 1932 newspaper, the Housing Committee was pleading for Petoskey people to participate in the listing of their rooms to house those planning to attend the big week of conventions. By June 4, already rooms had been listed to care for 1,500 people, but in as much as more that three times that many delegates and visitors were expected the committee urged other Petoskey folk to list their rooms right away.
"Persons, in making the listing of their rooms, may state their preference of guests from among the fourteen organizations holding their state conventions here that week. More than 100 delegates are expected to the G.A.R., while 500 are expected for the W.R.C., convention. The Veterans of Foreign Wars convention is expecting 800 delegates while its auxiliary is expecting 500. The Spanish American War veterans will have 400 and their auxiliary 300 to 400, it is said. The Daughters of Union Veteran are expecting 250, the Ladies of the G.A.R. 150 National Daughters of the G.A.R., 100 to 150.
It is figured there will be 1,300 men and 1.800 women delegates attending, in addition to many visitors. The number of visitors at these conventions usually run from one third to one half as many as the delegates."

Click on the newspaper below to read the entire paper which headlines the various activities taking place for the veterans. 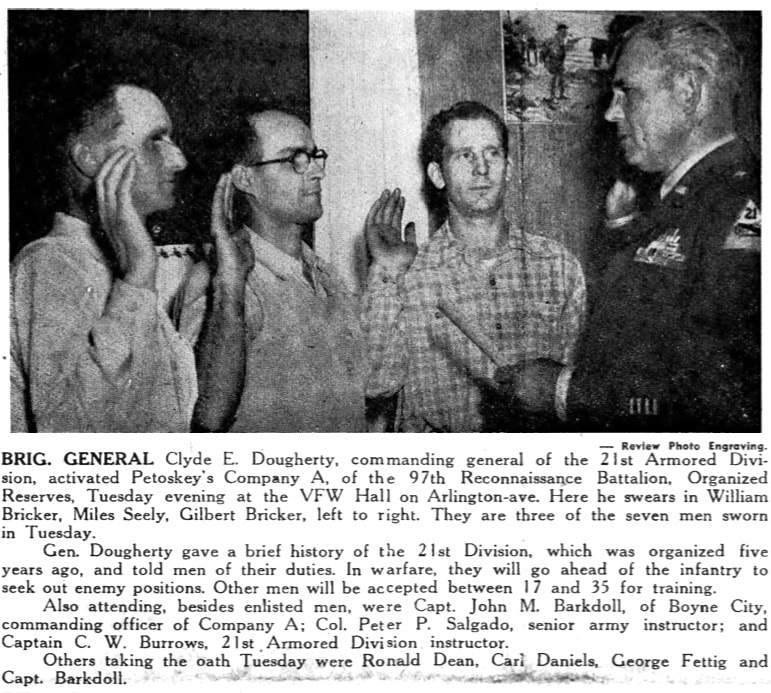 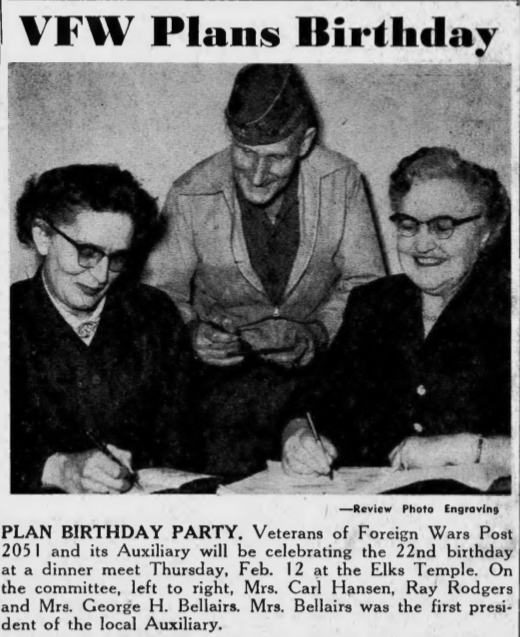 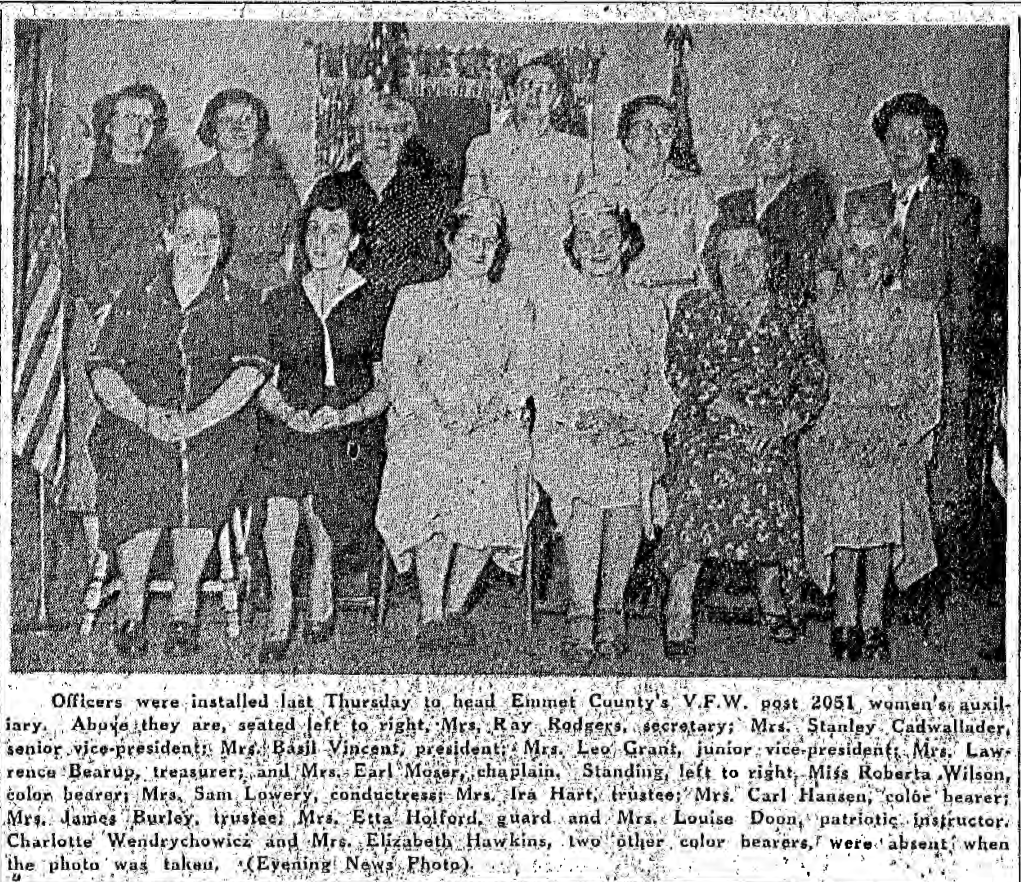 6 April 1953 ~ Petoskey Evening News
Photo Below: The Auxilliaries to the American Legion and Veterans of Foreign Wars
Ready for the Annual Poppy Sale. 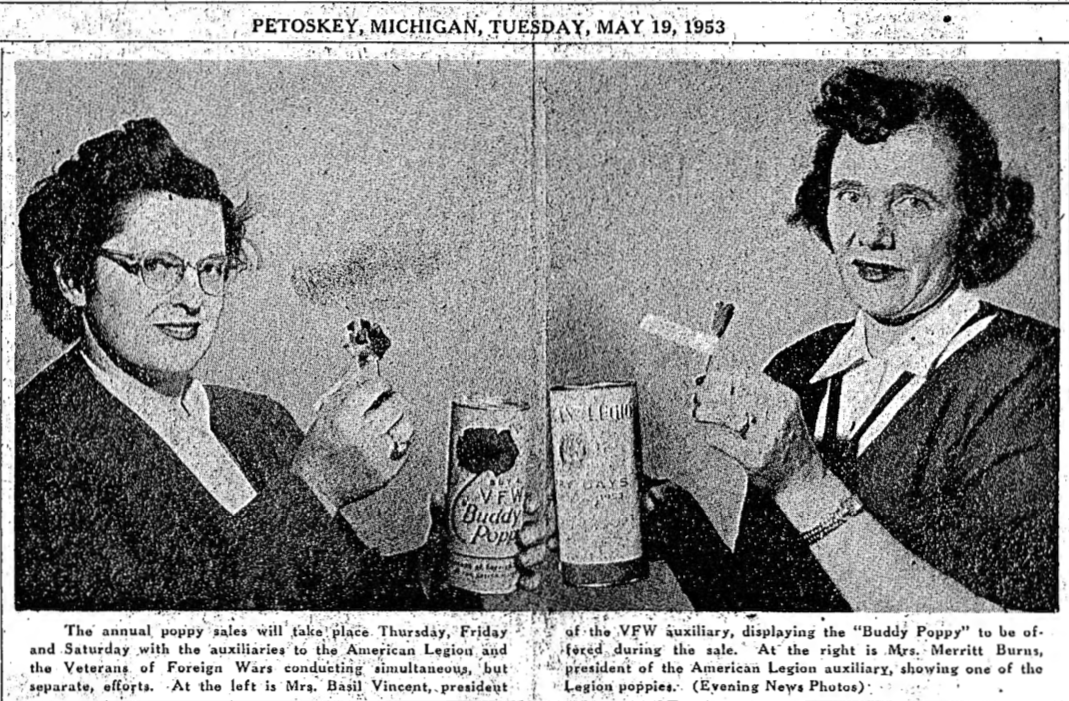 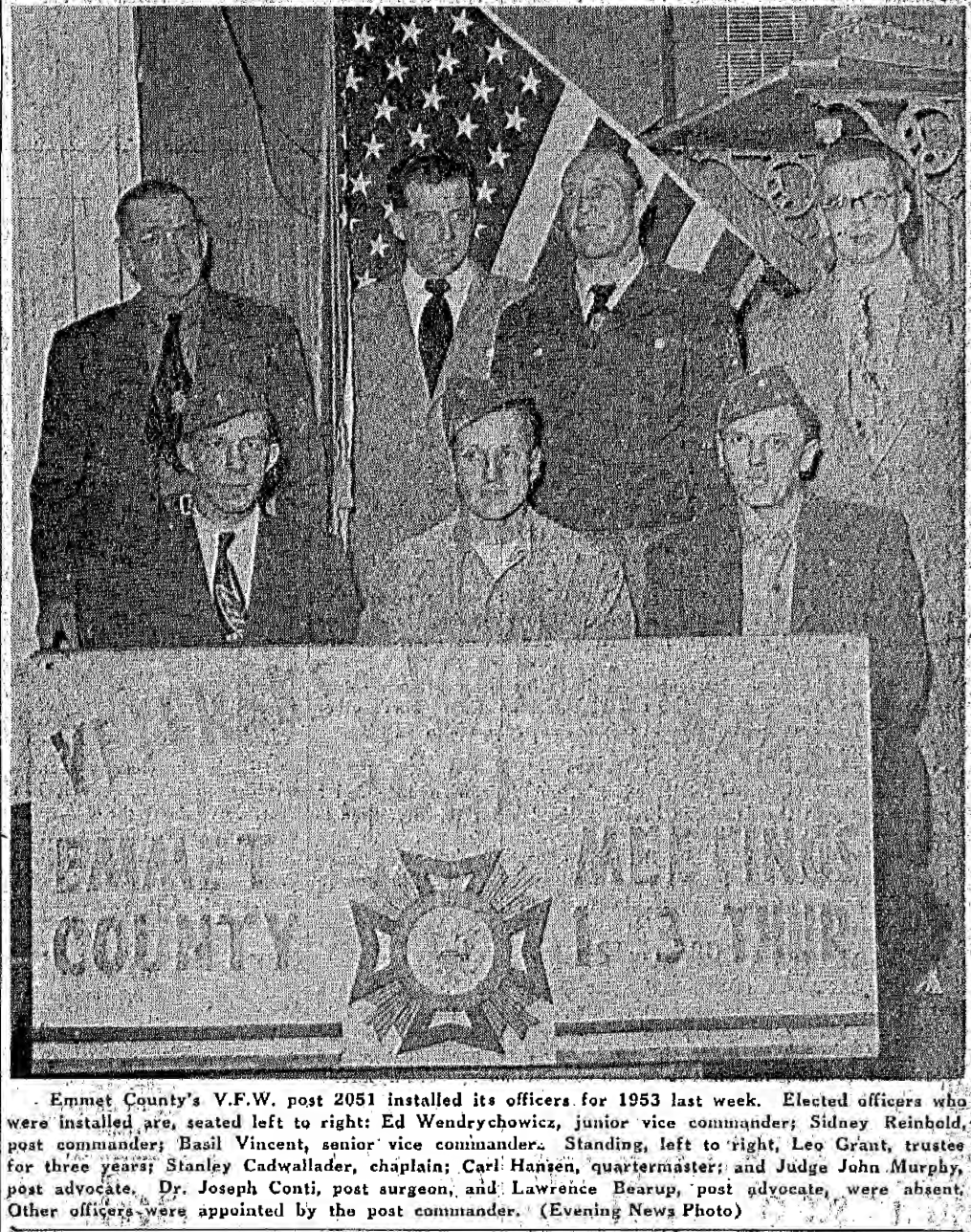 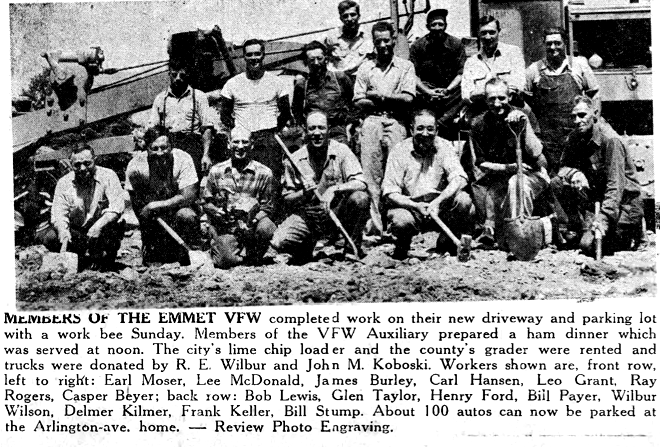 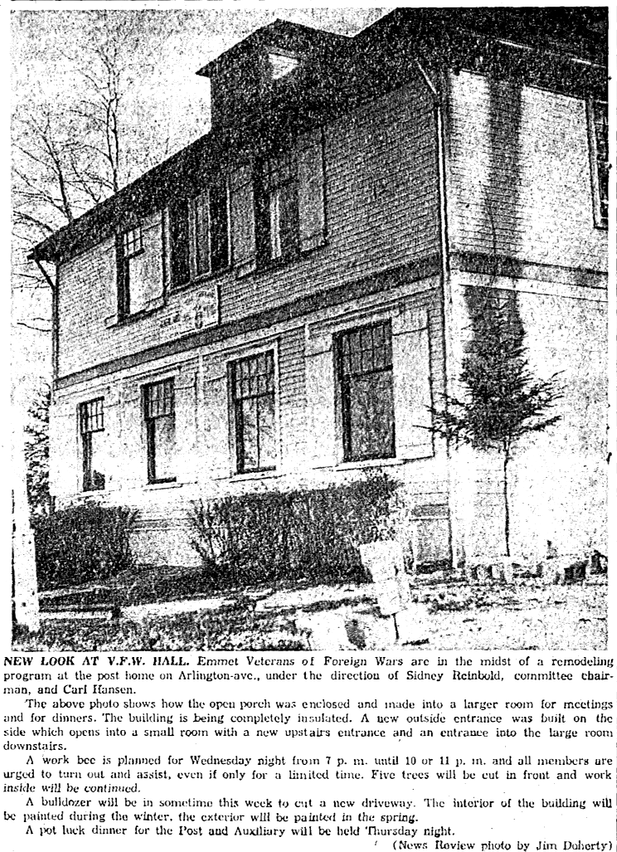 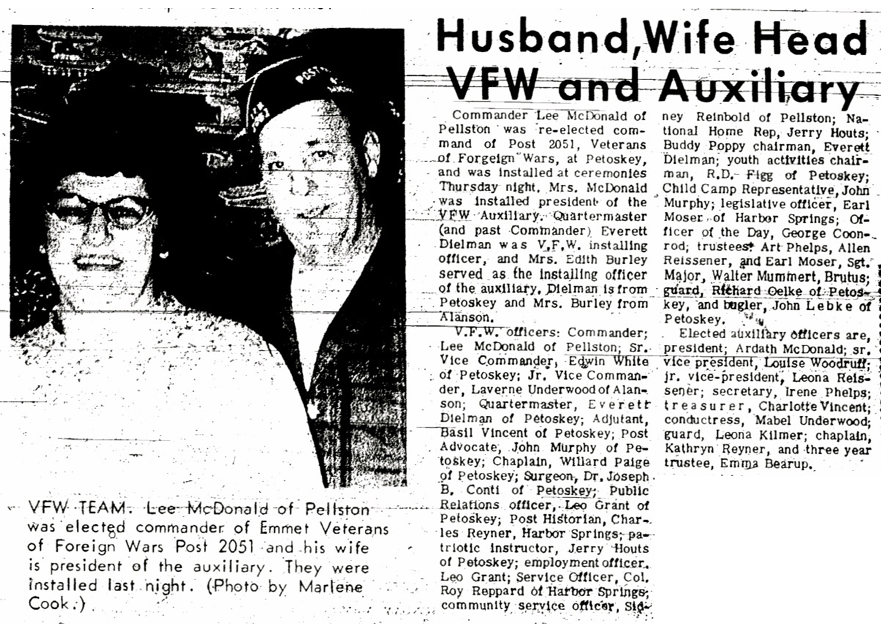 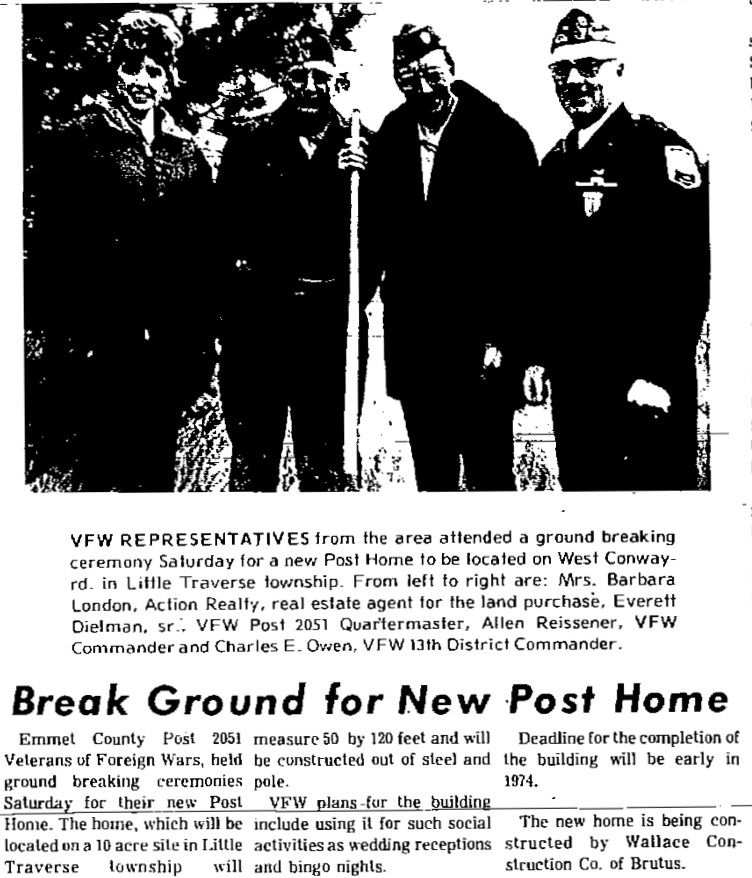